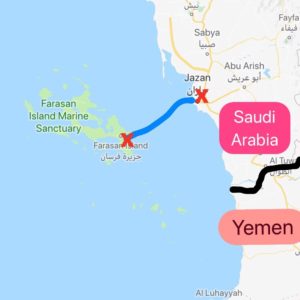 I’d been wanting to visit the Farasan Islands of Saudi Arabia for years, but the plans just never seemed to materialize. Or, if they did it was over the summer months when I knew it would be so hot and humid I would end up with heat stroke, so I didn’t go. This past March a friend of mine who goes there several times a year and has great contacts, organized a weekend trip for about 20 of us expats. The Farasan Islands are a chain of islands off the coast of Saudi to the south towards the border with Yemen. They are a grouping of coral islands. One of the locals we met told me there were around 200 islands, although the only research I can find says there are anywhere between 80-120 islands. So lets say over a hundred such islands. We flew from Riyadh to the city of Jizan and spent a night there before getting up early the following morning to take the public ferry to the largest island of the chain called Farasan. 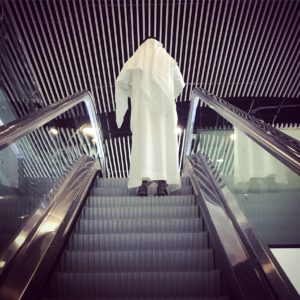 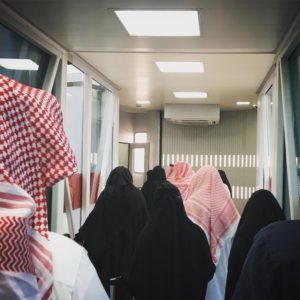 Jizan is a coastal city about 80km north of the border with Yemen. In the past year or so it (like Riyadh) it has been the focus of Yemeni missile attacks. We weighed the safety risk and decided to go. In Jizan we stayed a night at the Best Western- there are many hotel options in Jizan of varying class. Our hotel was not flashy, but totally fine for one night. The entire trip was organized so we only had to buy our plane tickets. Normally I’m the one who does a lot of the travel planning when I travel with others, so it was lovely to just show up and go with the flow. Note: going with the flow only works if you have zero expectations! My only expectation was for a daily nap which seemed highly doable.

So the public ferry to Farasan took about 90minutes and leaves at 7 in the morning. The island itself is about 50km from the mainland. It’s like a normal public ferry anywhere in the world except with zero lines and tons of pushing. Naturally, women and men are separated in the security areas. We arrived in Farasan and transferred to the Farasan Hotel. I can’t find a website for them but the phone number is +966173161166 if that helps. There are only 2 hotel options on the island as far as I am aware. The other choice is the Coral Hotel which is on the beach but quite a bit more expensive. The Farasan Hotel is not fancy but the staff will make you feel like family and the food is really good, so I would recommend staying there if you are traveling in a group. We had a lovely Arabic breakfast before making our way to the port for our boat tour. 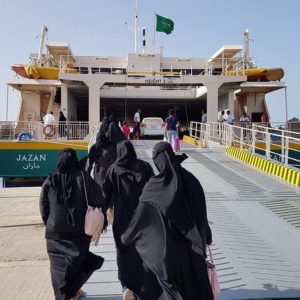 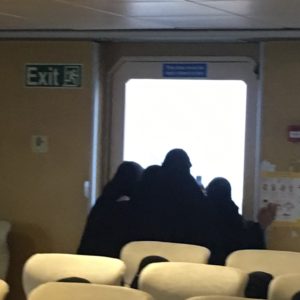 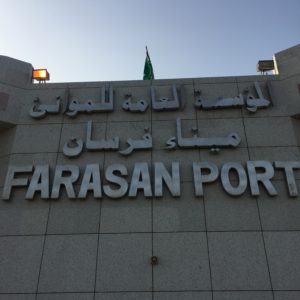 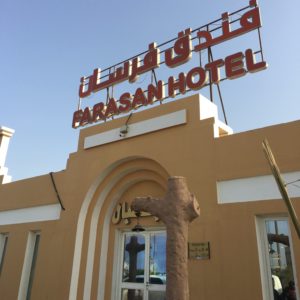 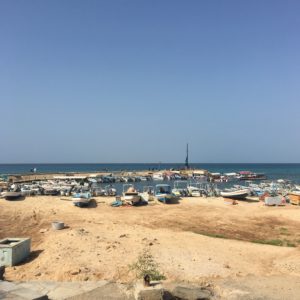 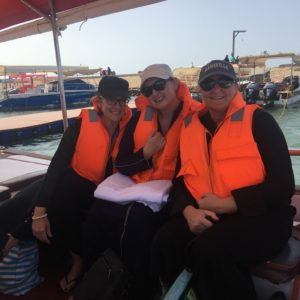 We had 2 boats between our group- later we would realize that we ended up on the unlucky boat, but I’ll save that tale for a little later! Anyways we donned life jackets over top of our abayas until we were out of view of prying eyes and then the abayas immediately came off. The water is the most surreal shade of blue. You know that turquoise colour that’s the most prefect mix of blue and green, and it was stunning. We attempted to stop at a snorkel spot but the current was really strong so we headed off to a more sheltered area. It should come as little surprise to you that I am equally as scared of water as I am of flying. I can swim, but I’m very nervous in the water. Luckily, my favourite Aussie sidekick had agreed to be joined to me the entire time we were in the water which made me more comfortable.  We did a little snorkeling. The water is really clear and there were a ton of fish around. We then set off to explore a private beach all to ourselves. Some people roamed the water’s edge collecting shells, others just relaxing in the surf. We then cruised out to a popular fishing area and  attempted to catch some fish for lunch, but the sea was really rough that afternoon, and several fellow travelers were getting seasick. So we headed to shore. We found a beach area with cooking huts for a late afternoon siesta. The boats were edged towards the shore so that you could jump over the side into the sand below. Seems easy enough right?! Well I’m anything but graceful, so as I was edging myself over the side I looked down and there was this tie-down hook on the ledge. I remember thinking hmmm that could be dangerous. No sooner am I hoisting myself over does the pocket of my shorts get caught on the hook and there I am dangling from the side of the boat my tip toes touching the sand. As this is happening a wave hit the boat causing it to shift and my toes could no longer touch, leaving me dangling attached only by my pocket. I yelled for help and they were able to get me unhooked, but my shorts were sadly now one pocket short. I cringe to think of what that scenario would’ve looked like had I not had shorts over my swimsuit bottoms!! 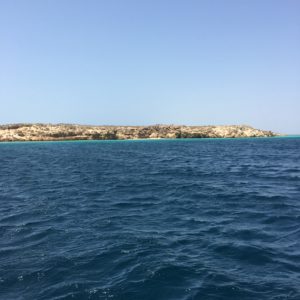 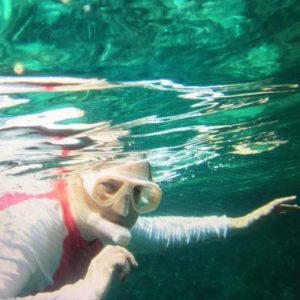 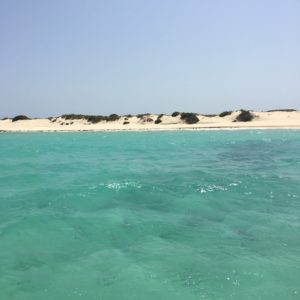 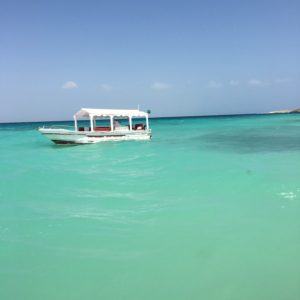 We spend the next few hours either napping in the beach huts, collecting seashells, or just hanging out while the boat crew went back out and caught fish for our lunch. It was a perfectly relaxing day. We feasted on veggies and rice and fish on the beach. It was divine.  On the way back the wind started to pick up. This coincided with the engine deciding to die. Right next to a rock wall that we were quickly drifting into as the captain tried to get the engine to start. Luckily, one of the guys on our boat had the genius idea to throw the anchor in to prevent us from actually being thrown into the rocks. The other boat eventually realized that we were not behind it and came back to offer assistance. They were finally able to get the engine restarted and we headed back to the port as the sun was setting. The ride back was epic. Our captain was driving full throttle trying to make it back before dark. The waves were smashing over the side of the boat and everyone was drenched and freezing cold. We literally looked like drowned rats. We ended up taking every towel on the boat and draping them over our heads to prevent the water from spraying directly into our faces, while trying to hold on as the boat smashed into the waves. By the time we got to shore we looked like total hot messes. We drove back to the hotel for hot showers and a late dinner of fresh seafood. 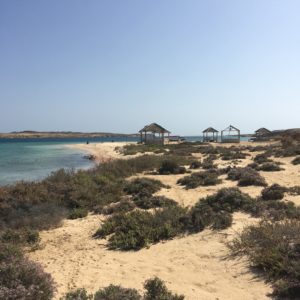 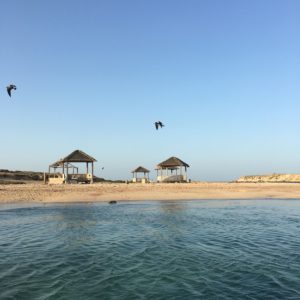 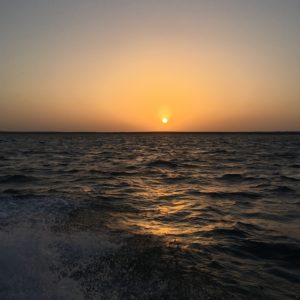 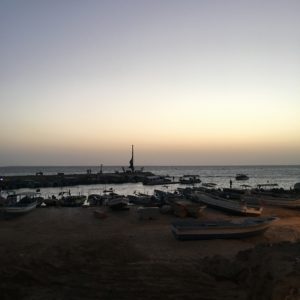 The following morning after another delicious breakfast we set off to explore the island. Our first stop was on the modern bridge that connects the two main islands. The views from here are stunning- I just kept thinking I can’t believe this is Saudi Arabia! From here we headed back to the town of Fursan and visited the House of Rifae which belonged to a pearl merchant. There are several ornate stone archways and houses in this area and we spend some time wandering around. Much of it is in varying states of disrepair and I would recommend sturdy shoes if you are exploring as there were bits of wood and nails from the partially collapsed buildings. Once the group was finished taking pictures and exploring, we headed for the nearby 18th century Ottoman Fort. For obvious strategic purposes it’s located on a small hill with views of the ocean. It’s rather small in size and really just consists of one long room with a well for water close by, but it was cool to visit. From here we visited the lovely coffee shop at the historical restored village of Al Qassar. We then made our way back to the hotel stopping off en route at a view point over looking the port and at a local beach before catching the 3pm ferry back to the mainland. 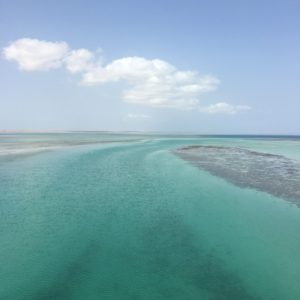 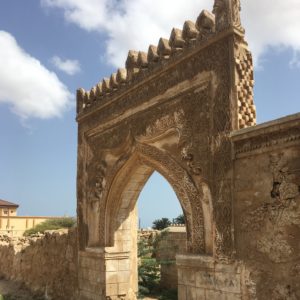 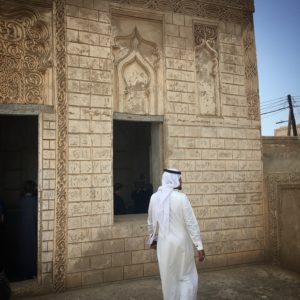 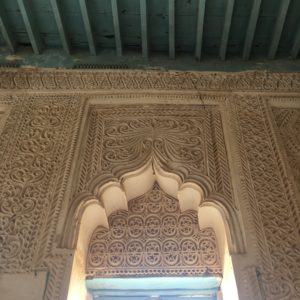 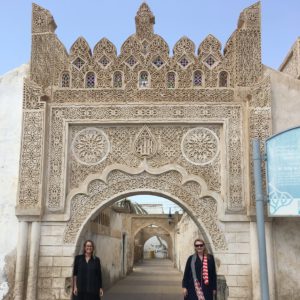 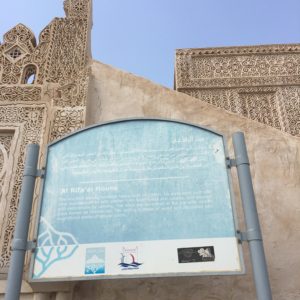 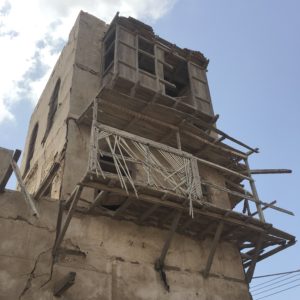 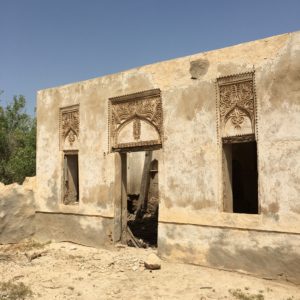 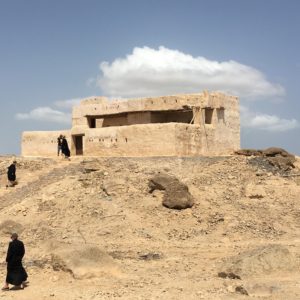 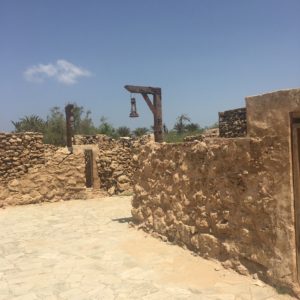 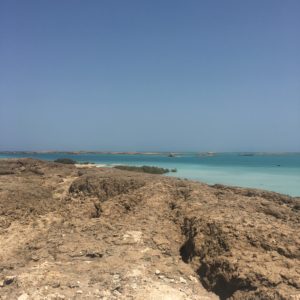 There is also a deer reservation and a coral museum which we did not visit, mostly out of heat exhaustion and just generally being lazy, but some people from our group did. I would highly recommend adding the Farasan Islands to your Saudi bucket list!!! Happy adventuring!