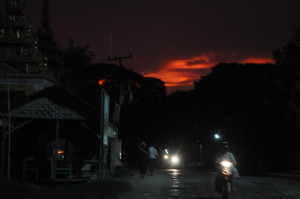 The first and only time I almost beat an Asian man’s ass was just across the border of Thailand in Cambodia, in the back of a taxi on route to Siem Reap. It was late at night, pissing down rain and visibility was maybe half a car length ahead of the taxi’s front bumper as the driver sped down the road dodging carts and motorcycles. Naturally, he was on his mobile phone  speaking Cambodian and telling someone the name of our hotel. Golden Mango Inn. He then slowly started to pull the car over to the side of the road in the middle of nowhere, in the pitch darkness. We had read horrible reports of the safety issues with crossing via land from Thailand into Cambodia via the Aranyaprathet/Poipet border crossing. Scams, robbings, and warnings NOT to cross after dark. And here we were crossing after dark. And in a car with a dodgy driver.

In my overly dramatic and active imagination this was the moment. The moment when all my awesome travel tales would come to an abrupt end. The moment where we would get robbed at gun point or murdered. Our bodies left in the dark night along a desolate road in the Cambodian countryside. The driver pulled the car to a stop and got out of the car without saying a word and went around to the trunk. He’s getting a gun I thought to myself, although I’m pretty sure I said this out loud to my travel partner who was also a little unsettled by the situation, but not nearly as crazy as me. All I knew was that if he were going to get a gun from the trunk there was no way I was staying in the back of the car like a sitting duck. It’s unclear to me why I thought that if he did have a gun the most logical place for him to keep it was in the trunk. But really, that’s besides the point. Everything from this point happened very fast. He got out of the drivers side, came past my door and headed for the trunk. Shit he’s getting a gun. I threw the door open and went around at him. He opened the trunk and because it was dark he didn’t see me at first. I lunged towards him as he reached into the trunk. He startled and said something in Cambodian. He then pulled out a…….towel. He pulled out a towel. He then mimed wiping the dirt and mud off the headlights. Shit got real. Real fast. He then shook his head, walked around me and proceeded to clean the headlights. I got back into the car and told my travel mate how I had bravely saved both our lives.

So several lessons were learned that night on the side of an unlit Cambodian road. I learned that even though I think it’s a good idea to head safety warnings and listen to advice from other travelers, you should also keep a clear mind. I learned that even though my instincts (and imagination) were clearly off I’m likely not going down without a fight. I also learned that I may have watched the Jason Bourne series more than maybe any one person should, but that my reflexes are none the less cat like fast. Our Cambodian driver I think learned the lesson to not pull over in the middle of the night on a back road without first indicating to your female passengers what it is you’re doing. He also might have learned that I was a bit crazy. But that’s a lesson I’ve taught more than just him over the years. Travel safely my dear readers!!

Have you ever WAY over reacted to a situation while traveling like I did? I’d love to hear about it so I feel a little less cray cray.