Why I Loved Bangladesh

Last year I convinced a dear friend of mine to travel to Bangladesh with me. Yes. I really said Bangladesh. For at least a couple years prior I had wanted to visit this country. The first time I was in Saudi Arabia I had a awesome driver named Saybel who was from outside of Dhaka. We would often talk about what it was like to live there, and about his family. Later that year Lonely Planet named Bangladesh in its list of top 10 best value countries of 2011. I was intrigued. Over the next couple years I listened to podcasts from travelers who had visited the country, and read blog posts. Although few tourists go to Bangladesh the overwhelming message the ones that did carried home with them was to go. You will fall in love with the people they said. They also spoke of how even though it bordered India, the country felt completely different. Bangladesh quickly moved to the top of the list of countries I wanted to visit.

Since we had already planned to do the Rickshaw Run and drive an auto-rickshaw 3000km across India, it was fitting that we would also visit neighbouring countries. From India we flew to Bhutan and from Bhutan to Nepal. It was while traveling in Nepal we bought our flight to Bangladesh. We bought them very last minute as in the weeks leading up to us going there had been Hartals which are politically motivated city or region wide strikes that affect transportation and can incite rioting. We closely tracked social media, and things seemed safe, so we registered with our embassies abroad (me with Canada, her with the U.S.) and off to Bangladesh we went.

We arrived at Dhaka international airport where I wrote in my journal that there was a significant military presence. We got a VOA (visa on arrival) and were met by a taxi organized by the hotel we were staying at. The sun had already set and the traffic was insane. We weren’t really very far from the hotel, but it took over an hour to get there. It was complete chaos as cars, buses, auto-rickshaws, pedal-rickshaws, and people powered rickshaws all inched forward into any seemingly available space. If I thought traffic in Delhi was something, Dhaka was a whole other story. Eventually, we made it to the hotel and while we were checking in we got an email from the U.S. embassy informing us that there was another hartal planned for the next day, and that it was inadvisable for westerners to leave the hotel. We asked the hotel staff about this and they said we would be fine going out. “No problem.” They said. And then one of the desk clerks casually said “just don’t take the auto-rickshaws.” Naturally we asked why. He replied totally matter of factly “petrol bombs.” Huh. Good to know. Being the sensible, life loving gals that we are, we stayed on lock-down the following day. We ordered room service, and read, and watched Titanic on the smallest TV known to mankind. 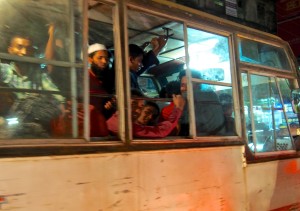 The following day we emerged. And it was hard to get a feel for the situation. We commandeered a non-English speaking bike-rickshaw guy to take us to the bus station to see about getting tickets to Bogra and we passed police in riot gear at almost every corner. They didn’t seem to have a real purpose, but were rather just milling about. We later found out that this is the norm, and actually had little to do with the hartal the day before. After getting nowhere at the bus station we tried unsuccessfully to get train tickets (sold out) so we had the rickshaw guy take us to the Ahsan Manzil otherwise known as the Pink Palace. The Pink Palace is beautiful and has quite the sorted past. It was completed in 1872 but abandoned a decade later when it was badly damaged when a tornado hit. It then became a slum until it was acquired by the government who turned it into a museum. It sits along the shores of the Buriganga River and is well worth a visit should you find yourself in Dhaka. 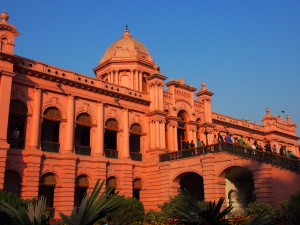 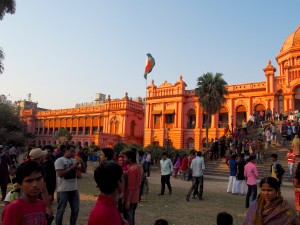 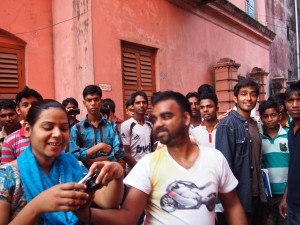 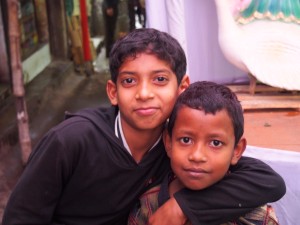 While visiting the Pink Palace we were approached by a guy named Hassan who told us he was an English student and wanted to practice his English with us. I have to admit that my initial thoughts were “how much is this going to cost us?” We were slightly jaded from our time in India where it seemed like nothing was ever free. Turns out, he was actually an English student, who really did want to practice his English, and meet the few tourists that visit Dhaka. He also spoke German, and a couple other languages. Hassan toured us around the palace. He told us it’s history while a crowd of some 30 people followed us around and took our photos or asked for photos with us. This would become a recurring event as often we turned up to a tourist site only to become the tourist attraction. From here he took us to the other main sites in Dhaka, walking us thru the winding streets to see the Armenian church, we visited the home of an artist who is famous for his pieces that adorn local rickshaws, and we visited a beautiful Shia mosque. We also visited the  Star Mosque which oddly has a tile of Mt Fuji in it . While there a lady asked us for a photo and then asked if we were from Japan. Konichiwa lady! 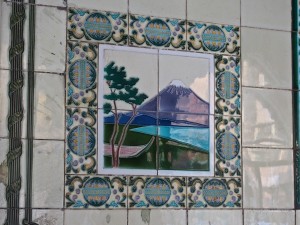 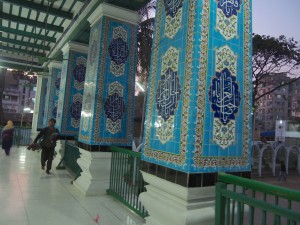 Later in the week we met up with Hassan again and he took us to Lalbagh Fort. It was built in 1678 by a Mughal prince and reminded me a little of the Taj Mahal. The following decade the fort changed hands but was never completed after the death of the new owners daughter Pari Bibi who’s tomb is there. The surrounding gardens are beautiful and you can climb on top of the old soldiers quarters for lovely views of Dhaka city. From here we walked towards the Buriganga River where Hassan helped us hire a boat to take us out on the river to the opposite shore. The waterways are essential to Bangladesh’s economy as many places are only accessible via the rivers. The ferries (as I’m sure you’ve seen on the news) are jam packed full of people and goods, and are often very weighed down and extremely unsafe by western standards. The river itself is the colour of oil. It’s black and greasy, and the river banks are littered with garbage. And yet, I loved it. People in passing boats and ferries would go out of their way to wave at us. And do the universal sign for “please take our photo” or take return photos of us. The people of Bangladesh are undoubtedly the most friendly and curious of any country I have ever visited. I smile every time I think about my trip there. 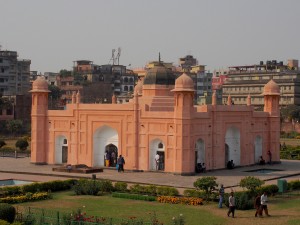 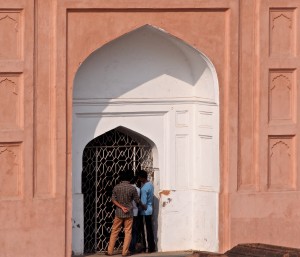 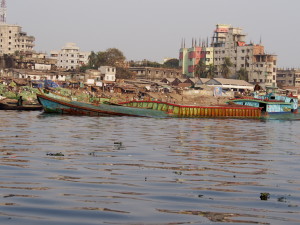 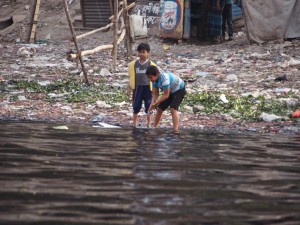 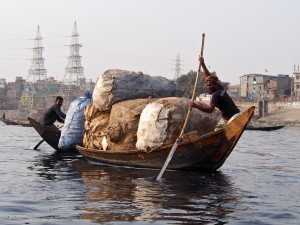 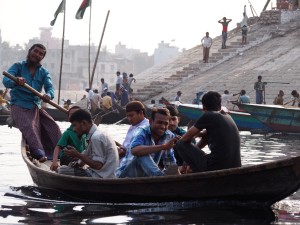 We finished off the boat trip with a visit to the ship breaking yard. The sounds of hundreds of hammers clinking against the steel hulls of the ships made a sort of urban symphony and I remember being mesmerized by it and taking a lot of video while we were there. Again we were greeted with smiles and waves by the men working here. We had the boat drop us on the opposite tour and Hassan led us through the local vegetable market as the sun was starting to set. The river looks beautiful at this time of day. Hassan led us thru the narrow back streets and with everywhere we went in Bangladesh we had a crowd of curious followers trailing us. We jumped in an auto-rickshaw where Hassan was able to convince the driver to let me drive and I inched the rickshaw thru the chaotic Dhaka traffic. Later that evening as we chatted on the street I wrote in my journal how a local man came up and gave us bubble gum and asked where we were from. Not five minutes later an elderly man came up to me and gave me a high-five. I wrote “I love it here!” 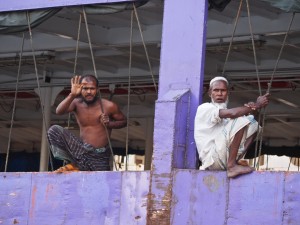 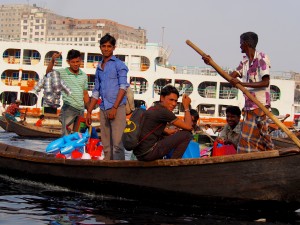 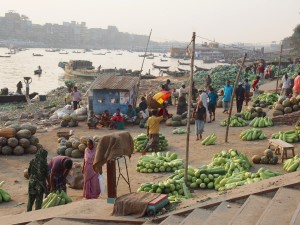 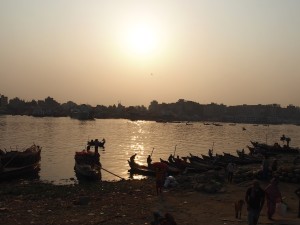 It’s easy to see by the many positive random encounters with Bangladeshi people why I have such a fondness for their country. I love taking photos while I’m traveling. In fact photography and trying new foods are two of the big reasons I love travel. I’m a great scenic photographer, but I’m nervous taking photos of people. Bangladesh changed that for me. People requested and even demanded to have their photo taken. But here’s the thing. They never, ever smile. The one Bengali word I learned and used over and over was “hashi” which means smile. Whenever anyone was posing for a picture I would yell “hashi” and they would always smile. I’m sure part of that was amusement at the fact that I would speak a Bengali word, but it worked. I took some of the best photos I’ve ever taken here. Below is the power of “hashi” in action. 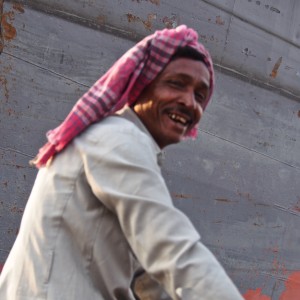 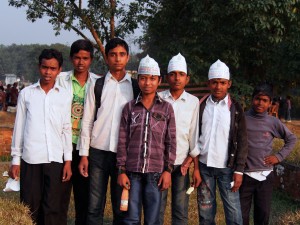 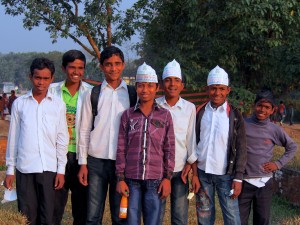 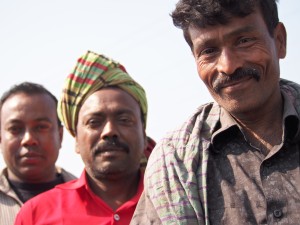 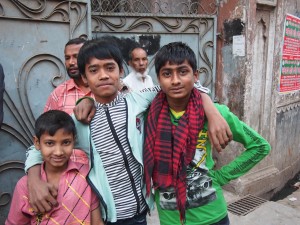 Don’t get me wrong-the poverty and over crowding are assaulting. Bangladesh is one of the most populated places on earth. And the travel there isn’t easy as there isn’t a lot of tourist infrastructure. But to travel in Bangladesh is to be rewarded in ways you will never imagine. There is a kindness and a curiousness that is incomparable to other countries. Rest assured you will be raving about your time here long after you’ve left. I should know. It’s coming up on 2 years since I visited and I have pictures of the many friendly people I met adorning my walls here in Saudi Arabia. So go. Visit. Be awestruck by the friendliness of the locals. Take photos. Explore. Visit amazing UNESCO sites and have them mostly to yourself. Mostly, I say because you will likely have quite the entourage where ever you go. 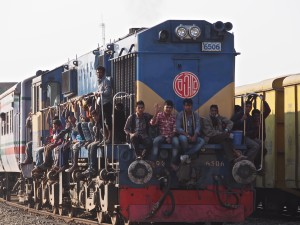 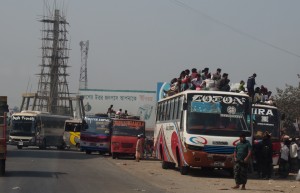 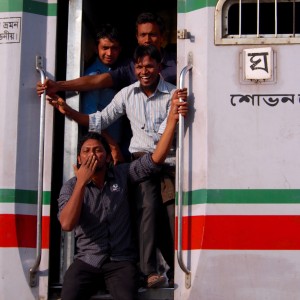 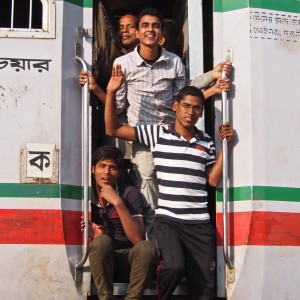 Hassan was the best part of our trip to Dhaka. Without him we likely wouldn’t have explored half of what we did. He recently started his own tour company called Dhaka Urban Outings. So when you go, be sure to connect up with him. Tell him I sent you!! You can find him here on Facebook.

Have you traveled in Bangladesh? Do you agree? What off the beaten track country is your favourite?