That One Time my Passport was Stolen….. 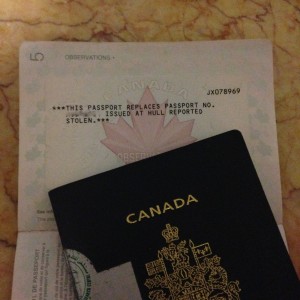 So in my last blog post I alluded to that one time on my first international trip where my passport was stolen. The year was 2006. I was super green to the world of travel and still under the delusion that at 27 I would likely get ID’d on a musical pub crawl in Dublin. And that when I did get ID’d I thought my driver’s license wouldn’t suffice so I had best have my passport on me. How naive.

It was a Saturday night. After bouncing around between several bars that evening and making friends with many locals and an American couple we ended up at a dance club. As memory serves me there was dancing involved. My recollection is part memory, part drunken photos. I ended up with a stolen passport, but somehow didn’t have my camera taken. My travel mate’s camera wasn’t as lucky. So after the bar closed we ended up on the street in front of the bar and this is where I realized I was sans passport. Initially I thought I’d just put it somewhere else in my purse. That initial feeling where you think you’ve lost something is awful. It feels like burning in your throat followed by a fluttering in your upper chest. Oh Shit. My passport isn’t in here.

After the initial shock subsided the water works kicked in. Followed by us madly banging on the bar door for them to let us back in. They were in the process of cleaning up. We checked to bar floor, the bathrooms, but no passport. Shit. They also stole my US work visa which was affixed in the passport. Double shit. Adrenaline and being scared shitless are powerful antidotes to alcohol. I sobered up pretty much stat. We went back to the hotel. I called my parents. I cried like  baby. Through sobs I told them of my predicament. I called the Government of Canada’s emergency assistance number. In retrospect it wasn’t a true emergency. But let me tell you it was an awful feeling being abroad without a passport.

Lucky for me there was a Canadian consulate in Dublin. Unfortunately, they were closed until Monday. Remember how I said prior to this that I was under the belief that embassies were open 24/7. Like 7-11. Nope. It still cracks me up that I thought that!! So here it is in the early hours of Sunday morning and we are to fly out early Monday afternoon. After a few hour of restless sleep we went to the police station to file a police report, I got passport photos taken, and printed off an application for a temporary passport. Then we did what anyone would do- went on a ghost tour of Dublin later that night. Because what else could we do?

So Monday morning we show up at the consulate with all my papers. Unlucky for me the lady who could’ve issued me a temporary passport had called in sick, so the best they could do was to issue me an emergency passport which was basically an 8×10 piece of paper with a couple stamps and my picture on it. It would get me from Dublin to London, but not back to the US (where I was living at that time). In London I was supposed to go to the embassy there and they would be able to issue me a new passport. So I boarded the flight to London. And then in London the airline (which shall remain unnamed) allowed me to get onto the flight to LA. With an 8×10 piece of paper as my ID. So get on the plane I did. In my head everything would be ok once I landed because they have my fingerprints on file and they can see that it’s me, and that I’m legally allowed to work in the US. Wrong. Dead-wrong.

I landed in LA, and immediately the immigration people were less than pleased at my arriving from the UK with only a mildly-official piece of paper. I was pulled from the immigration counter to a separate area where I was left to wait for what seemed like a couple hours. In this waiting area were other people- most did not speak English, but like me were in varying degrees of immigration greyness shall we say. Eventually I was brought to an office were it was decided that I should be put back on the returning flight to London….except that the flight had already left. So then it was decided that I had 3 days to get a new passport and work visa or I would be asked to leave the country.

Now here’s where my luck was good- I was living in Orange County, just outside of LA, where there was a Canadian consulate, and where for an absurd amount of money they can issue you a temporary passport and an expedited permanent passport. And lucky for me living in Orange County I was only 2 hours from the Mexican border to get a new work visa. Work visas are only issued upon arrival to the US. Had I not been close to the Canadian or Mexico border this already costly ordeal would’ve included a flight out of the US so I could get a visa coming back in.

So in the end it all worked out. It ended up costing many hundreds of dollars, some gas down to Tijuana and a couple boxes of tissues, but I got a great travel story out of it. In fact I’m exactly the person you want to be traveling with if your passport ever gets stolen. I know exactly what to do. Stay calm. Locate the nearest embassy or consulate. Visit during business hours. Voila.

What’s the most stressful thing you’ve had happen while traveling??