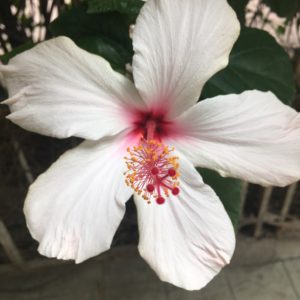 So after a super fun 24 hours in Lalibela we arrived back in Addis Ababa for the last 2 nights of our trip. I’m a huge wine fan, so when researching the trip we found Castel Winery a french winery who had imported french grapes into the Rift Valley of Ethiopia and arranged a tour. By arranged a tour I mean we booked a guide and driver for the last 2 days to take us around. They contacted the winery and arranged a tour for us. So early one morning we set off. The winery is located 3 hours to the south of Addis- it being the rainy season everything was green and lush. Our trip plans for the day were to visit the winery, do a wine tasting, and then drive back to Addis where we had arranged a tour of this world famous women’s hospital that we had to reschedule from the previous day because of our flight delay.

This particular day was a great reminder that sometimes things do not go as planned. Sometimes travel is hard and frustrating and there are communication errors and shit just goes generally opposite of how you want it to. So we drove south towards the winery. The roads reminded me of driving in India- small single or double lane roads winding thru tiny villages lined with massive potholes and any number of bikes, motorcycles, car, trucks, cows all over the road. We passed several funeral processions as we passed thru the tiny villages. We stopped off mid morning for a cup of Ethiopian coffee and Fanta for Kiwi and drove to the winery.

We arrived at Castel Winery which is a large wine exporter. We had read blog posts about the lovely tours other travelers had, and again our tour company had emailed them that we were coming. Except they had no idea we were coming. So we arrive and negotiations were made as to whether we could be given a tour. Thankfully, a random employee gave us a tour of the vineyard and told us about the agriculture in the region and what types of grapes they grow. Which was great, except I’m primarily there to taste the wine. I will totally drive 6 hours round trip on backroads just to taste some wine. So next they arrange for us a tour where the wine is actually made. Which again is cool. But I’m here for the wine people. So after that tour they’re like “would you like to buy some wine?” And I’m like “hells yes, but after we taste is so I know which ones I like.” Being a real wine nerd I had already looked up all the wine they made and knew which ones I was keen to try. And then the guy said the words that I dread….“not possible.” And I’m like “what now?” And they inform us that the person in charge of the wine tasting wasn’t working today so there was no wine tasting. We had a total first world traveler melt down. I think I stopped breathing I was so disappointed. I mean that was the entire point of us driving all that way. We could’ve literally stayed in Addis and bought every type of wine that they made there and did our own wine tasting while getting day drunk instead of driving 3 hours there and back to taste zero wine. We went wine tasting and left sober. It was actually pretty fitting seeing as how our trip to Ethiopia had gone thus far. So they told us we could still buy wine. So we bought one bottle to take back with us. Naturally, being the person who likes to get the last word in I told the tour guide and the winery employees that if they want to get tourists obviously they need to have wine to actually taste. Kiwi chimed in and was like “you need to get some table and chairs and crackers and cheese…..” and I was like “Kiwi that’s the least of their problems- there’s apparently no wine to taste.” 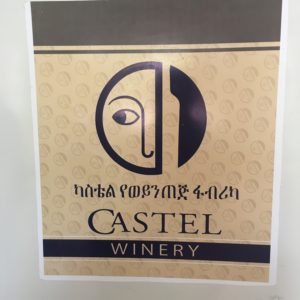 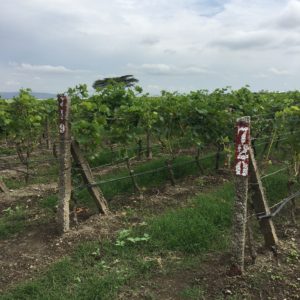 We sulked back to the car, and because we were already tight for time for our hospital tour we opted to skip lunch and just try and make it back to Addis in time. Our guide and driver assured us this was possible despite our gut feeling that it was not. One lesson I’ve learned from mixing with other cultures is that often times people will just tell you what they think you want to hear instead of telling you something bad. This was that exact situation. In hindsight unless we were taking a helicopter back it was unlikely we ever could’ve made it back in time. Like hella unlikely. After 3 more hours in the car we were hungry, tired, and it was impossible to make our appointment so we had to call and cancel. Again. I was so bummed. The Hamlin Fistula Hospital was founded by an Australian couple in the 1970s. It provides free care to women who have sustained injuries related to childbirth. As someone who works in maternity and is passionate about women’s health I was really gutted that we missed this. This particular day was just not our day. We arrived back at the hotel 9 hours after we set out, starving and feeling defeated from the many obstacles of the trip. We had plans to meet up with one of the housekeepers I work with here Saudi Arabia. She was in Addis with her children to visit her family and this was one of the reasons I wanted to visit Addis. We couldn’t have felt less social after our day of irritation but we dragged ourselves to the shower and made ourselves presentable. I’m so very glad we didn’t cancel.

My work friend and her brother picked us up from our hotel and drove us to a nearby touristy restaurant that serves Ethiopian food and then also has traditional dancers. Her three children and her brother’s wife and their two young kids were waiting for us. We had such a fantastic evening. Truly. That night will always be such a special memory for me. We ate some delicious food and sat around chatting while I cuddled the brother’s 6 month old baby girl and gained the trust of his 3 year old son. They were adorable and they kept saying to the 3 year old “do you want to go to Canada?” And I was like don’t leave this kid unattended or he’s for sure coming to Canada with me. We watched the dancing and he sat on my lap (the kid not the brother just to be clear) and we took a ton of photos and got all the kids to do kissy lip selfies with us. It was the best. And then they refused to let us pay and even payed for our taxi back to the hotel which was beyond kind. I hope I can repay this kindness to them in the future. After a dark cloud of a day the storm cleared and the sun brightly shone on us. 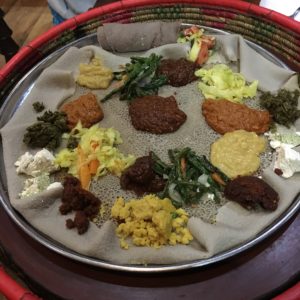 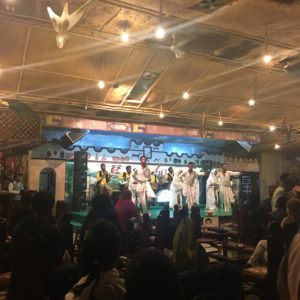 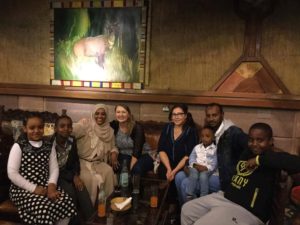 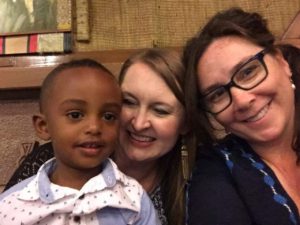 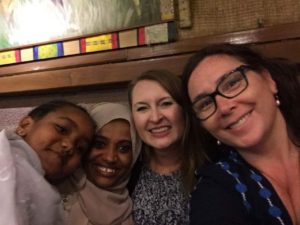 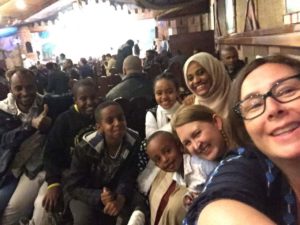 The next morning we woke up early for a tour of Addis before our flight back to Riyadh that evening. We did a little shopping. The textiles in Ethiopia are beautiful so I bought an absurd number of scarves and some jewelry. We then visited Holy Trinity Cathedral which is very much worth a visit if you are in Addis. We arrived at the tail end of a service and there were worshippers outside. The inside of the church has stunning stained glass windows, but the bit I liked was that the walls and pillars were tiled with this glazed tile which made the light reflecting through the windows bounce all over. Also the carpet was fuschia and who doesn’t love that?! From here we drove to a view point on Mt Entoto which over looks the city of Addis Ababa. Did you know that Addis is the fifth highest capital city in the world at nearly 8000 feet? Well you do now. You’re welcome. We drove down the mountain and visited the Lucy exhibit at the National Museum. While there I started to feel not so great. My stomach felt a little off and I was dizzy so I took a rest hoping things would improve. They did not so we went to a nearby restaurant and I tried some 7-up and soup which marginally helped. We visited the Ethnological museum which probably would’ve been interesting had I not been feeling so poorly. Our guide was a chatty fellow and basically read every single sign to me which was way over stimulating. After that we drove through Merkato market which is the largest market in Africa. They literally sell everything. We drove through because I wasn’t feeling great and our guide wouldn’t have let us out of the car anyways, because according to him there is a lot of theft and such there. I imagine that’s not an untrue statement from what I saw. We then went back to the hotel so I could rest before our flight as I was starting to run a fever. 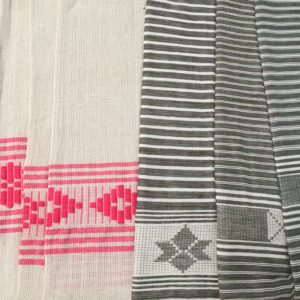 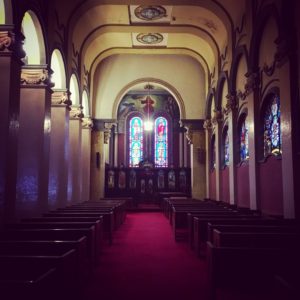 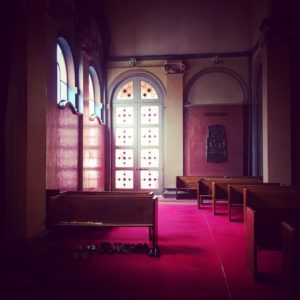 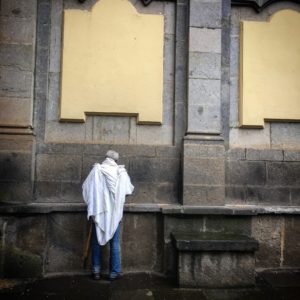 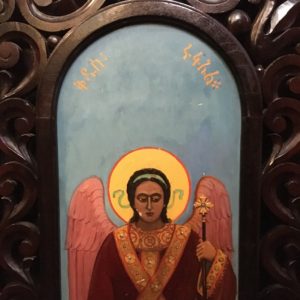 So later that night we headed off to the airport. The check in guy was great and gave us a row to ourselves as I clearly did not look well. This was the first time our flight was actually on time. Thank goodness. We boarded the plane and there was this creepy guy who was clearly taking photos of us. I was too ill to care but Kiwi was getting irritated. Right before take off he moved seats and sat directly across the aisle from Kiwi. I was just waiting for her to tell him off because he was hardcore staring at us. Then he tried to do his seat belt up. He grabbed part of his seat belt and part of the one from the empty seat next to him and tried two identical pieces to match. Naturally this didn’t work. Kiwi and I just sat there watching this happen. So he tied the belt in a knot and tucked it under his arm and look around to see if anyone noticed. Kiwi and I made eye contact with each other and then just about died laughing about the hilariousness of the whole trip. My medication kicked in and when I woke up the creepy guy had moved seats away from us. When we landed in Riyadh I texted my driver to have him pick me up crackers and 7-up. Sometimes having a driver is the bomb. 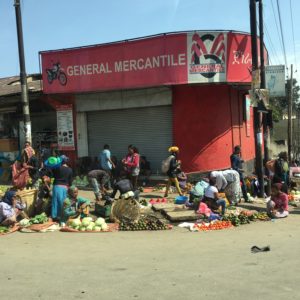 So while a lot of crazy things happened over our 5 day trip to Ethiopia it was still overall a great trip. One for the books really. There’s no one I would’ve rather shared it with than Kiwi as we balance each other out and we laugh all the damn time which makes us great travel sidekicks. I can’t wait for our next adventure!!! Next week I’ll update ya’ll with what’s in store for me for the few months…..