So back in May some nurses, some engineers, and some embassy people took a little jaunt across the Saudi border to Bahrain. We were an international conglomerate consisting of Canucks, Kiwis, Aussies, and one cool Malay. If Dubai is the Vegas of the Middle East than Bahrain is it’s seedier cousin- kinda like the Reno of the Middle East. It’s a safe haven for Saudi expats and Saudi nationals wanting to embark on a weekend of debauchery. Personally, I had huge plans involving my favourite B’s- bacon and booze.

Bahrain is a teeny tiny island connected to Saudi by a causeway. Depending on traffic and border wait times it takes about 4-5hours to get to Manama (the main city.) The weekends get pretty insane what with everyone in Saudi trying to get out so it’s best to leave early in the day on Thursday and come back mid day on Saturday (Saudi weekends are Friday/Saturday) unless you love sitting in a hot car. Lucky for us we were riding in a vehicle with Diplomatic plates so we got to cross via the VIP crossing, which was super fast, and even had a tea boy to serve you tea to your car. I was oh, so tempted, but in 35C heat the last thing I wanted was hot tea. Now if he had cold beer that would’ve been an entirely different story!! Because it’s on the gulf it’s way humid compared to Saudi. The last time I was here I visited in late July, and I was that gross humid sticky every time I left the comfort of AC. 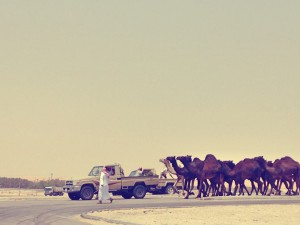 Camel crossing on the way to Bahrain…. 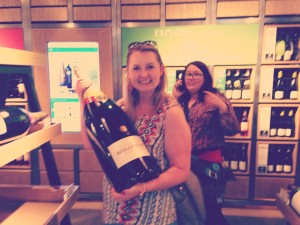 Store staff were not thrilled about this….

So what’s there to do in Bahrain you might ask? Well I’ve already covered the essentials…..my old friends booze and bacon. But there’s also a really nice mall where you can try on clothes and go catch a movie (2 things I can’t do in Saudi Arabia.) There are bars and nightclubs. You can go to the beach, or boating, or jet skiing. There’s a fort which dates from the 6th century AD which I visited the last time I was here. We spent most of the weekend drinking some much needed beverages and we hit up a couple bars/clubs one of the nights. One of the places we went to was full of young American navy boys who I felt old enough to have birthed half of them. We also felt like me might have been the only women in the place who weren’t “working” if you get my drift so we peaced out pretty early. If you didn’t catch my drift, Bahrain is full of hookers. They are everywhere. I’m not one to judge, I’m merely stating my observation. 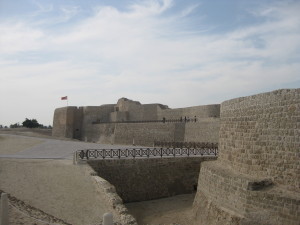 The other thing we did was go to a boozy brunch at the Crowne Plaza. The food wasn’t quite as good as the brunch we had at Feast in Dubai, but it made up for that in after brunch entertainment. After brunch there is a dance party complete with DJ and disco lights in the room next door. It was awesome. People were super day drunk and falling all over the place which made for amazing people watching. It was highly entertaining. Lucky for our group we were also day drunk, but being the experienced drinkers that we are, we weren’t falling all over the place. Yet. Just kidding Pops, I kept it relatively classy!!

So that pretty much sums up a weekend in Bahrain. It’s a nice quick weekend away. If driving there doesn’t sound so great it’s a little over an hour flight. Safe travels…..