Generally speaking banking can be a frustrating endeavor in any country, but I suspect that Saudi has most countries beat. We have a bank on the hospital compound, and several ATMs throughout the hospital. Unfortunately, given the delay of getting my Igama (permanent residence card) I have been bank-accountless the last 3 months. Basically this means that when I get issued my old-school paychecks I have to head over to the bank and cash the entire monthly salary and then bribe or sweet talk someone (thanks Katie!!) to wire my money for me. Sounds simple enough right……well with most things in Saudi this would be a dead wrong assumption. So you head over to the bank and unless you are crazy, or desperate for cash, you avoid going within a couple days of payday. Sadly, I was the latter so I bravely headed over the day after payday. I had heard that the day before things were really out of hand and that the police had almost been called because there were so many people packed in and no one was cuing. This I can definitely believe.

So anyways, I get to the bank and take a ticket from the cuing machine, which seems like a foolproof idea to keep things orderly except that often times men (in particular) act as though it is below them to wait in line, and just walk right up, or cut to the front. Often times said men are wearing a destinguishable white lab coat. So, there are 4 tellers, and its quite rare to see all the tellers open at once. From my astute observations skills this is how things seem to work. The teller signals the teaboy who brings tea, and the teller takes a sip of tea. He then adjusts this head scarf. His mobile phone rings he answers it. Chats. Takes a sip of tea. Calls a customer forward. Helps customer. Sends a text. Sips tea. Adjusts head scarf. Customer. Repeat. Its fascinating. And equally frustrating. Now to be fair, they might be making work related calls. I have no idea. And since I’ve never worn a male head scarf on my head I can’t fairly comment on the degree of skill is takes to keep them properly balanced in place. So finally, finally its my turn. I go up to cash my cheque. The teller informs me that he has just run out of cash. And I’m like “ha ha, very funny” and then I remember that Saudi’s don’t often crack jokes, so to convince me he shows me his empty cash drawer. He calls over to his colleague a couple seats down (who has headphones in) and requests more cash. Headphone guy is not quick to respond (I imagine he did not hear him). Again a request for cash is made. Tick toc. So while I’m standing there the teller asks me if I want a cookie. And well, there’s nothing else to do so, yeah, I’ll eat a cookie. So I do. And it’s tasty. And then the teller says “a sweet for a sweet.” Huh. That’s a new one for me. So by this point the cash guy finally comes over with several stacks of bills. And the teller informs me that the bank is 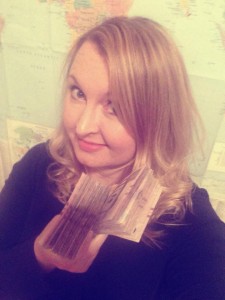 out of 500 riyal notes (the largest bills they have- worth about $125US) and that all they have are 100 riyal notes (worth about $25US.) So literally, my entire monthly pay was given to me in $25US increments. I had 2 thick bricks of bills by the time he was done. Held together by elastics bands, gangster style. I took them home and spent the afternoon resisting laying on my bed and throwing the bills up in the air to make it rain money. The only thing preventing me from doing this is that money is super dirty and the fear that I might lose some behind the bed.

On Saturday I went back to the bank because the bank is open for a couple hours in the morning and seeing as the Saudi weekend is Friday/Saturday I figured it would be quiet and I could open my account without any major incidents. Haha! My optimism about Saudi sometimes is hilarious. It’s almost like I forget what a complete cluster most things are and expect opening a bank account to be a smooth process. So I take a ticket and sit. Its 9:15am and the bank opens at 9am. 9:30 rolls on and the money is still being counted, and none of the female customers have been helped. 9:45 and then I realize that the area designated for opening new accounts is empty- empty of employees. So I stroll over to customer service to make sure that they do actually open accounts on the weekend. And the guys says yes, there are 2 guys scheduled. And I’m like “what time do they start?” And he’s like “9am” and then my brain clues in and I ask “what time do they usually show up, or rather do they actually show up?” And all the nice customer service guy can do is direct me to the managers office. Who calls the guys. And gets no answer. And so I leave. And so this week when I’m feeling an abundance of patience I will try and open a bank account. For now I’ll just count my stacks of cash and pretend that I’m loaded.

Saudi is both an endlessly fascinating and frustrating place. The only real way for a westerner to cope is to see the humour in it. It’s pretty hard to stay angry when you’re laughing about the absurdness of a situation. At least that has proved to be my best coping skill. Also next week I’m heading to Cyprus and Qatar for a lovely week and a half!! Yeah!!