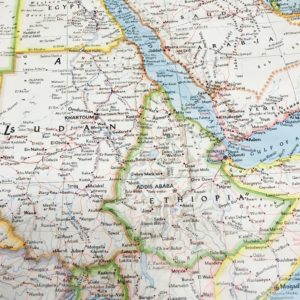 Last month I went to Ethiopia for 5 days. You’re probably saying to yourself “hmmm Ethiopia is an interesting choice?!” My reasons for going were threefold. First, it’s an easy direct flight from Riyadh to Addis Ababa so it’s a great use of 5 days. Secondly, these UNESCO rock churches that I’ve been wanting to see are there and thirdly, one of the lovely housekeepers that I work with was taking her family home for the summer and would be in Addis during this time. So we booked a ticket. My kiwi sidekick has been to Africa a bunch and had previously flown with Ethiopian Air. Reportedly, they used to be amazing. Our choices to get there were to fly with them, or with Saudia stopping in Jeddah. The direct flight with Ethiopia Air was the logical choice.

I’m part of a Girls travel group on Facebook and in the week leading up to our trip I saw a couple different girls post about getting stuck in Addis  with Ethiopian Air, or having their luggage turn up with most of their things missing, or their luggage never turning up. I told my kiwi sidekick this but she was unphased. The day of our flight I came across another post about Ethiopia Air.  The person commented if you want some entertainment to read the reviews on Ethiopia Air’s Facebook page. In that moment for whatever reason I did want some entertainment, and so I searched them. The reviews were awful. I’m already a nervous flier so reading this was not an especially smart move. Basically, all the reviews had the same thing in common- things went from bad to worse. People said that if there was an option they would rate them zero stars instead of one. Phrases like “worst airline” “horrific experience” “total incompetence” keep repeating themselves, and my anxiety was building. This was red flag numero uno.

So after working a 12hour day shift we went home from work to finish packing. I grabbed an hour cat nap and we were off to the airport for our 3am flight. We arrived at the airport and it’s normal Riyadh chaos. Oddly, our flight isn’t even listed on the screen so for a second we think maybe we’re at the wrong terminal. Turns out we’re not, just for whatever reason our flight and airline aren’t on the monitor. Hmmm. Weird. Red flag numero dos. So we check in, and it’s mayhem. People have like a million bags and like 5 pieces of carry-on per person. As you can imagine getting thru security took all the remaining patience in us after working 12hours. So we wait at the boarding gate which is confusing as we aren’t sure if the flight is even on time because again it’s still not on the monitor. People are literally camped out in the walkways and it’s pretty much impossible to move around. I go find someone to get some intel on when we are actually leaving- because I’m such a stressed flier I like to take my prescription meds an hour before we leave so that as we are taking off I’m mostly asleep. So they say the flight is delayed a bit. A little while later a guy says we will be boarding soon, so I medicate. We all form a line (I’m joking of course).  There’s no single line per say, just like 10 lines that all end up in people crowding together and the people behind you pushing. Part of the plane begins to board and then there is a commotion and suddenly we are all back in the boarding area. Doors are closed and we wait. At first people are standing in place and then people just start dropping to the floor unsure whether to go take seats or if the issue will be resolved quickly.

Eventually a guy comes around and says “mechanical problem.” And I’m like what does that mean? And he just repeats the same phrase over and over which in that moment was highly irritating and I immediately decided I didn’t like this guy. Over the next 3 hours we would mill around the airport trying to get an update. There were very few westerners on the plane. As the delay went on it became apparent that Ethiopia Air well knew of the delay before we checked into the flight, hence why it never ended up on the list of departures. This of course was done on purpose so they didn’t have to put people up in hotels. Seeing as most of the flight was Africans I imagine they felt they could get away with treating people like this. This made me more angry. By 7am they had not given us much info or offered any of these people food or water. Many of the people on this flight wouldn’t have had the money to pay airport prices for things like food and drinks. Because I was already so annoyed I made a big deal about this to some of the airport staff and then they suddenly brought food and water out. We waited some more. We started to make back up plans. Where should we go instead we discussed? There was a flight to Dubai at 5pm. We could go home and repack and come back to the airport. Check into a 5 star hotel and lay by the pool and sip cocktails and get fanned by a pool boy. By 9am we were demanding to speak with the supervisor. I was told that he couldn’t come now because he was on the plane. We demanded refunds. They said that wasn’t a problem but that we had to wait for the supervisor. They then told us and a select few passengers that the flight was actually cancelled. Again they would refund us, but we needed to wait on the supervisor to officially state it was cancelled. So we waited some more- and bonded with a few other passengers over the disaster that is Ethiopian Air. So then the “supervisor” shows up and it’s this same jerk that we had to deal with earlier only now he’s saying that the flight is leaving right now. I’m all like “so the mechanical thing is fixed?” And he’s all like “inshallah” and my kiwi sidekick and I look at each other like are we actually doing this? And I swallow my anxiety medication and we board the plane. Eight hours after we were due to leave we actually left.

So we get on the plane and there are a bunch of crying kids because they are overtired and hungry and frustrated just like us. I put an eye mask on and my headphones in and I’m out. A while later I’m woken by someone shaking me. I groggily pull my headphones out and lift my eye mask and it’s a lady from South Africa whom we’d been chatting with earlier. She knew we were nurses and she’s saying to us “they need you. They’ve been paging a medical emergency for the last while, there’s a lady who might be in labour.” Kiwi and I look at each other and shrug our shoulders and try and get our shoes on and go see what the scenario is. I’ve never actually seen a birth take place. But I did recently compete a Neonatal Resuscitation course so I’m feeling mildly confident with my skills. The woman is on the floor. She does not speak English or Arabic. She looks to be having some pain but does not appear to be in active labour. She speaks Swahili. Thankfully there is one random dude who is acting as a translator. Kiwi leans over to me and says she knows the Swahili word for giraffe. Funny. But not helpful. There is also a girl there who has just completed nursing school. She has examined the woman and her water has not broken and she is not bleeding. I ask the man to translate a series of questions. When did the pain start? How many babies has she had? How far along is she? Can she still feel the baby moving? The pain started yesterday. It’s her 5th pregnancy, and she is 6-7 months along although to me she looks small. The baby is still moving.

I ask the flight attendants for the emergency kit. There’s not a ton in it that will be useful if she has this baby. We take her vital signs and give her something to drink as I’m sure she’s dehydrated given our lengthy delay at the airport. We are an hour outside of Addis at this point. A medical team will meet us when we land. The crew is helpful and professional. As we begin the decent they move the woman and I to business class. I have the man translate prior to him returning to his seat that if she feels severe pain or if her water breaks she should squeeze my arm. The plane lands and as we touch down she squeezes my forearm and her eyes go wide. So here we are taxiing down the runway and I’m under her skirt checking the situation. No bleeding. Her water did not break. Once we were stopped the medical team arrived and I reported off to them and the woman was taken away in a wheelchair. I wonder whatever happened to her.

And so that’s how we found ourselves in Addis Ababa deliriously tired. This was far from the only adventures we had on the trip, but luckily the kiwi and I travel great together so mostly we end up just laughing when things went awry. Would I fly Ethiopia Airlines again? No. Not unless it was free and it was the only option, but I’m sure there are worse airlines. More of our Ethiopian adventures to come….