Fez is the second largest city in Morocco (Casablanca is the largest) and up until the mid 1920’s it was Morocco’s capital (Rabat is the current capital.) Fez is considered to have the largest Medina in the world. It has over 9000 maze-like streets and alleyways. The Medina was founded in the 9th century and the entire area is a UNESCO site. Similarly to Marrakech the city is broken into the old and new parts.

We took a 1st class train from Marrakech to Fez which takes about 8hrs. Moroccan trains are nice. They have AC, the bathrooms aren’t awful (although like Indian trains they just open onto the tracks), and they have a roaming food cart. We shared a 6 person berth and both had window seats. Not a bad way to travel. Personally, I love the motion of travel. I love to watch the scenery, and the world go by as I listen to music or just contemplate life. The train made it’s way northwest from Marrakech towards the coastal areas of Casablanca and Rabat before cutting east towards Meknes and ending in Fez. The city itself was much larger than I had originally expected. We booked a riad on the outskirts of the Medina called Riad Jamai and it was lovely. It you are planning a trip to Fez this is a great place to stay as it’s easy to get to by car, and the staff are super helpful. They have a lovely rooftop terrace which is a great way to take in the sunset while sipping a glass of wine while listening to the call to prayer chime in from all the surrounding mosques. This really is a magical experience. We decided to eat dinner here both nights, and they were 2 of the best meals we had. 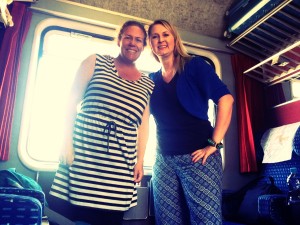 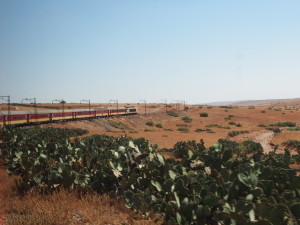 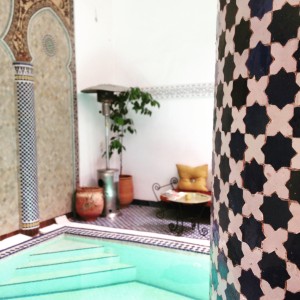 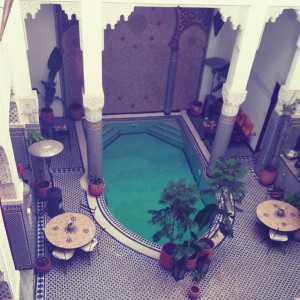 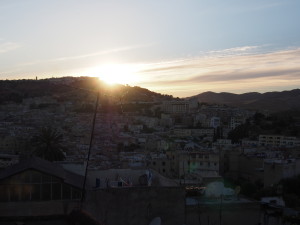 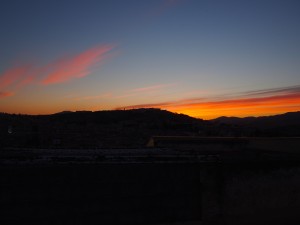 Sunset over the Medina

We had been forewarned about wandering the Medina at night by many of the locals we met. Petty-crime is the most common complaint. The Medina is so large that it’s rather intimidating, and this seemed like sound advice so we didn’t venture out at night. The following day we hired a guide who took us around Fez for an entire day. With a guide you can easily see everything you want to see in a day- but wear comfortable shoes because you will put on a lot of miles doing it. Fez is also not a flat city, so be prepared for some steep hills and to climb some stairs as you explore. We started off the day by exiting the Medina via the Bab Boujloud gate (otherwise known as the “Blue Gate” although it’s blue on one side and green on the other) and hailing a taxi to take us the the Jewish quarter otherwise known as a mellah. Prior to the exodus to Israel it’s estimated that between 250 000-350 000 Jewish people lived in Morocco, making it the largest Jewish population in a Muslim country- today, it’s estimated that around 2500 remain, mostly residing in Casablanca. We visited the Jewish cemetery and drove past what remains of some Jewish houses which stand in contrast to the Muslim homes as they have open second floor balconies. From here we walked over to the King’s Palace with its ornate golden doors and then visited the Batha Museum which is housed in a 19th century summer palace with beautiful gardens. We then walked back into the Medina winding our way past bakery stalls, butchers, and vegetable sellers. The market was a bustle of activity, as it was day before Ramadan would start and people were stocking up for festivities for that night. 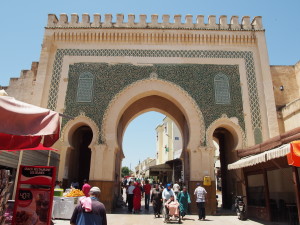 It’s blue on the other side I swear… 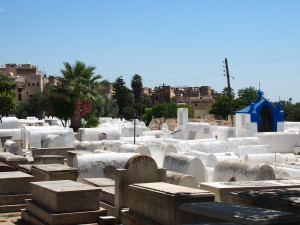 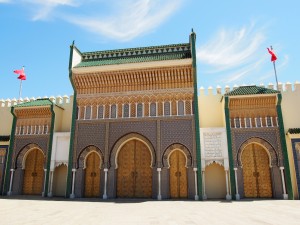 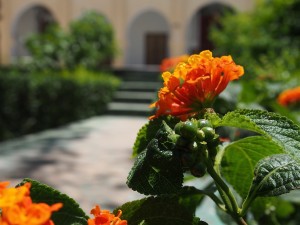 Gardens at the Batha Museum

From here we took another taxi to Merenid Tombs dating from the 13th to 15th century. These tombs offer spectacular views of the Medina below. Little is known of these tombs, but they are believed to possibly have housed royalty. From here we visited the Fassi ceramic and pottery co-operative and got a tour about how Moroccan pottery is made. Of course there’s no way to get out of there without buying something, because everything is super beautiful. I bought a lovely oven safe plate- which really is rather silly because I neither cook, nor do I live somewhere currently that has an oven. But it is very pretty so c’est la vie. We were then dropped back in the Medina and our guide dropped us off for lunch before we started touring again. Next on the itinerary was Kairaouine Mosque and University. The university is thought to be the oldest university in the world. It was opened in 859 and in 1963 it was included in Morocco’s state university system. As non-Muslims we were only allowed to sneak views (and photos) thru the doorways. 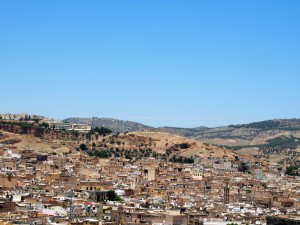 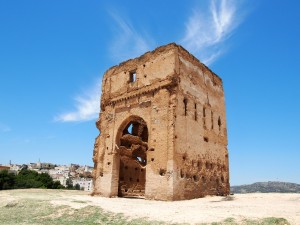 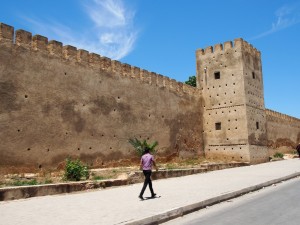 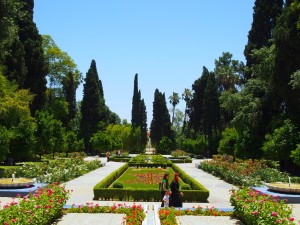 Public gardens in the new town 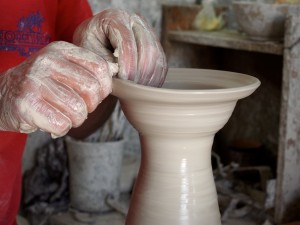 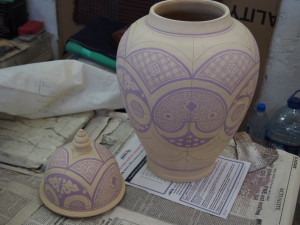 From here we did a little shopping. Then we ended up at the tanneries. Locals all over Morocco love the tanneries, in that no matter where you are going someone will suggest or try and lead you to the tanneries. Obviously the locals get compensated for anything you might buy. So off to the tanneries we go, because according to my bible (the Lonely Planet) Fez leather is some of the finest leather in the world. And I was itching for a new jacket. You can really smell the tanneries before you see them. They are gag-worthy. Luckily, they give you a fresh sprig of mint which only slightly masks the smell but did prevent me from vomiting in my mouth. I’ve read that for photographic purposes it’s best to go to the tanneries in the morning when the colour is most vibrant, but we went in the afternoon, and the pictures were great. So after we’d been told the whole leather spiel the pressure was on for us to buy something. And buy something we did. We both bought lovely leather/Berber carpet bags, and I bought a soft black leather crop jacket. I’m very much looking forward to being able to wear it in the cooler months. From here we wandered back towards our riad while stopping off at Nejjarine Fountain a very ornately restored fountain. 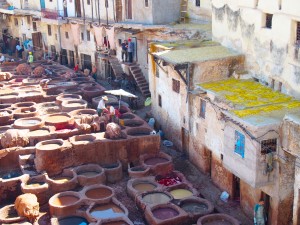 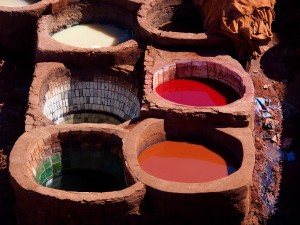 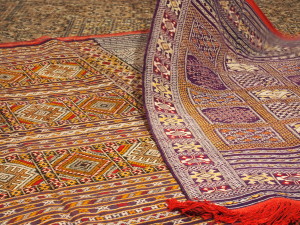 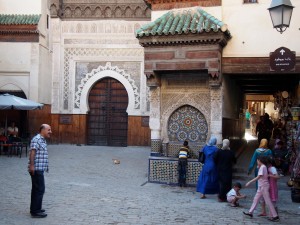 So that wraps up our 2 nights in Fez. Of course there is much more to explore and we could have spend much more time here, but for us this was a perfect amount. From here we headed towards the famous blue city of Chefchaouen with a stop-off at the UNESCO site of Volubilis.

Have you been to Fez? What did you think?