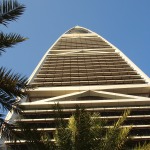 One of the numerous things on my Saudi bucket list was to have High Tea at “The Globe” restaurant in the Al Faisaliah. Last weekend I organized a group of 10 other nurses from my orientation group and we went. It costs 180 riyals ($48US/$54CDN) which does seem a little steep, but I had heard good things about it and knew the view would be well worth it. I’ve never had high tea before so I have nothing to compare it to but I had envisioned teeny tiny little sandwiches with cucumbers and cream cheese. There was a good mix of western and Middle Eastern foods. I love seafood and there were lots of options with salmon, which was pretty much what I filled my plate with. There was sushi, hummus and bread, some Chinese dumplings, spring rolls, and a variety of other little appetizers and tiny sandwiches. There was a lengthy tea list which was included in the price. The food was pretty good, but the desert and the view were the real highlights. Chocolate fountain. Check. Desserts topped with gold flakes. Check. Too many tiny cakes to choose from. Check. 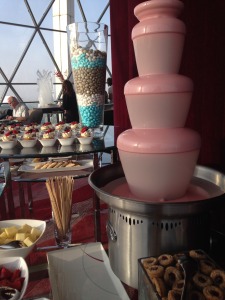 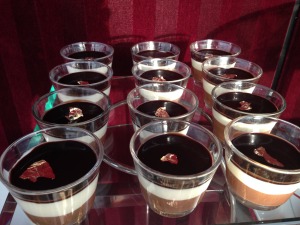 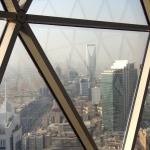 The view was Ah-mazing. A panoramic view of Riyadh. Unfortunately, the afternoon we went it was hazy (sandy) so visibility wasn’t at its best. We had a front row view of the sunset, which was beautiful. It was cool to see how enormous the hospital compound I work at is. The Globe is split into 2 levels with the level we were on being for westerners, so we were allowed to take off our Abayas. I almost fooled myself into thinking I wasn’t in Saudi except that there was no alcohol on the menu (no surprise) and a large bottle of spring water cost almost 2 glasses of wine back home. After filling our tummies and watching the sun set we went to the observation deck to take more photos of the Riyadh skyline. It was super windy up there, but such a great place to take photos and mix with the locals. Here are some more photos from The Globe…. 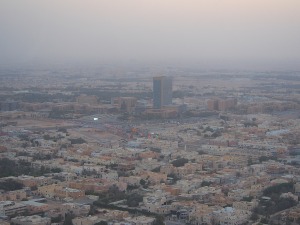 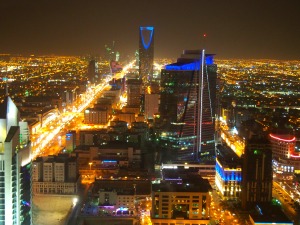 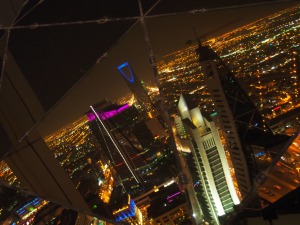