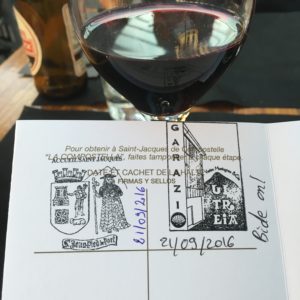 Today marks my Camino anniversary. A year ago today Pops and I woke up filled with anxiety and excitement in the town of St Jean Pied de Port on the French side of the Pyrenees mountains. We ate a typical Camino breakfast of toast with jam, coffee and juice and we packed up and headed out in the mid mourning hours. We stopped off in a small church and I said a prayer for safety for the journey that lay ahead. I’m not especially religious, but I would repeat this habit in countless churches spanning the whole of Spain. Mostly asking for a safe journey, a quiet mind and an open heart. We crossed the main bridge leading out of town, stopping to take a selfie. Well two selfies really, because Pops has this uncanny ability to look completely surprised in almost every photo. The second one he looks slightly less surprised. We followed the bronzed metal markers that dot the streets leading up the hill outside of the town. These markers then turned  into wooden signs or spray painted arrows that we would follow for the next 5 weeks westward across Spain to the city of Santiago de Compostela. 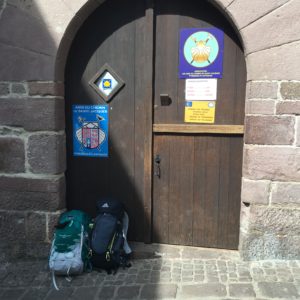 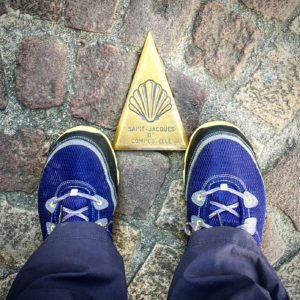 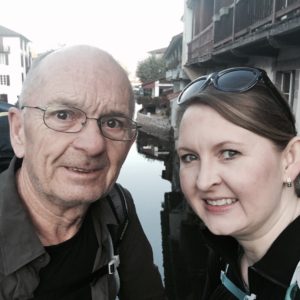 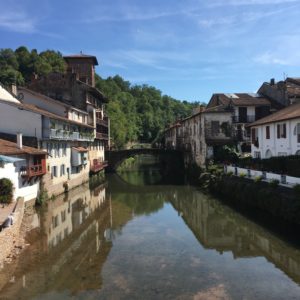 We spent the next several hours climbing. That first day was only 8km but we would climb 600m into the hills to our first nights stay at Orisson. Those first 3-4km I referred to in my journal as deceiving. They didn’t seem that hard, but the last 4km were very steep. I had trained very little for our Camino- mostly because it was difficult to do much hiking in the months leading up to it on account of living in Saudi Arabia where the temperatures were still extremely hot to be hiking outside, and that mostly everywhere is flat. I had trained with my pack on a treadmill. The conditions going over the Pyrenees were nothing like walking on an incline on a treadmill. First off I had no idea that my feet would get so sweaty. My shoes it turned out were not especially breathable, and it only took me about 4km to start to develop blisters. Yep 4km. Those blisters would haunt me the next 450km all the way to Leon where I finally broke down and bought new shoes. 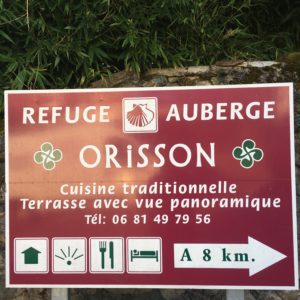 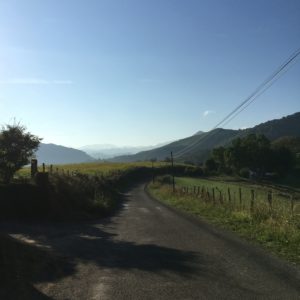 The scenery that first day was mesmerizing as the town of St Jean disappeared and we slinked up the hillside. The hillsides layered against one another forming a sort of tapestry with the differing hues of green and browns of the hills playing against the bright blue sky. Pops was extremely patient with me as we stopped numerous times to tend to my feet. Cows passed us, as did other pilgrims. We sat on a log and ate some nuts and hydrated. Further up the path we stopped at a scenic overlook where 20-30 buzzards were gliding in circles on the air current with the Pyrenees in the distance. A little further we came to a flattened area and then a small downhill that dropped us at our refuge for the night. It was mid afternoon by the time we arrived and we dropped our bags in our room. We were lucky enough to arrive and be given one of the only private rooms for the night. We then went and ordered a well deserved beer. If I close my eyes I can still feel how crisp and refreshing that beer at Orisson was. We sat outside looking at the view and eventually made our way to shower and wash our sweaty clothes and lay them out to dry for the following day. 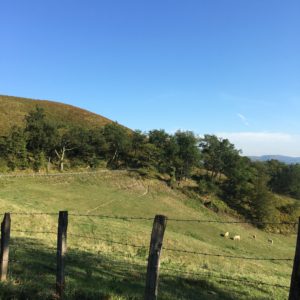 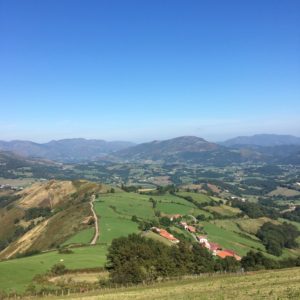 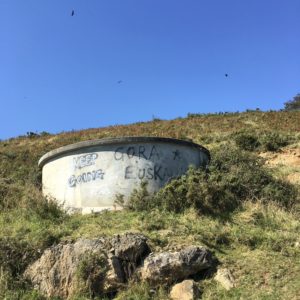 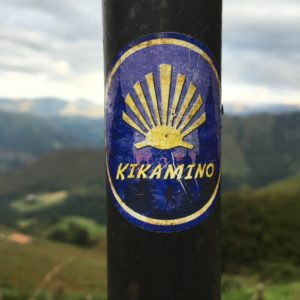 We chatted with fellow pilgrims. We were all bonded together by this shared journey that we were embarking on. Walking quite literally into the unknown. We shared our first of many communal meals that night. Something that would become one of my favourite parts of the Camino. Little did we know that this band of characters would become the backdrop of our Camino experience. How our paths would cross and intersect and we would get news about some of these people days later by way of the Camino grapevine. There were the 2 Irish sisters. The Korean girl who we would see many times throughout our Camino. The 2 older ladies from Quebec. The loud Texans- a couple celebrating their 30th wedding anniversary and their uber fit daughter and son in law. And then there was the older American man who talked loudly into his phone. The first time we laid eyes on him he was having an animated conversation and Pops and I looked at each other as if to say “bloody Americans.” His name was Richard and he played a huge role in our Camino. We would walk countless days together. Sometimes in a group, sometimes solo but in sight on one another, sometimes with other pilgrims. We would later learn that the person on the other end of the phone was his wife Sherri and over the next 5 weeks we would be invited into the calls with her. Richard is also one of my best Camino memories and a true Camino blessing. So many of my funniest Camino memories involve him. A personal favourite was when Pops and I were waiting for him at the top of a steep hill and Richard made his way over the crest holding his phone against his ear yelling “Taxi!!” Richard was the best. 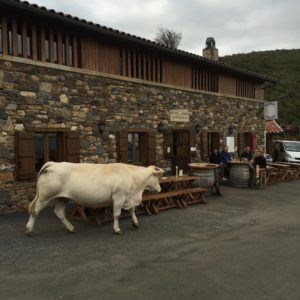 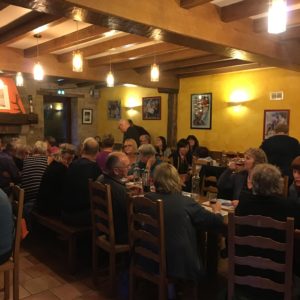 In honour of this anniversary I thought I’d make mention of the many, many things I miss about walking the Camino. Because truthfully not a day goes by that I don’t think about it and long for the sound of crunching gravel under my feet, the wind blowing against my face, and the quiet sounds of nature.

-I miss being outside as the sun is coming up. Watching the changing light and colours as the sky lit up. Almost every day of those 5 weeks I saw the sunrise. It would rise behind us lighting up the path in front of us casting shadows of our silhouettes. I would stop and take picture after picture spaced out by a few minutes, each picture more stunning than the last.

-I miss the simplicity of the journey. Walk. Eat. Sleep. Repeat. Except it was more like wake up- eat some type of breakfast. Walk. Second breakfast and cappuccino. Walk. Lunch. Walk. Beer. Shower. Dinner. Wine. Sleep. Or something like that….

-I miss the introspection. The quietness of being alone with my thoughts. Having the ability to tune the outside world out. Walking the Camino is like being insulated inside a bubble. You end up being disconnected from the outside world.

-I love seeing the world at walking pace. There is something to be said about crossing a country powered by your own two feet. I’ve always been a fan of slow motion travel and not much is slower than a walkers pace. You observe things you would otherwise miss traveling by car or train. You take note of things like the smell of wildflowers or the texture of a fern. It’s really something to turn around and look at the landscape behind you to see how far you’ve come.

-The people. Pops and I met so many lovely people. The Camino has a way of leveling people so that it really doesn’t matter what your income is or what your education level is or what your job is. Literally no one cares. What they care about is your reasons for walking. Your observations and experiences. How your feet are doing. I loved meeting people from so many different countries. In fact our last night in Santiago we met up with fellow pilgrims we had crossed paths with from the U.S, Canada, Netherlands, Korea, Australia and Switzerland. A whole new group of international friends.

-As I’ve mentioned I loved the evening pilgrims communal dinners. It was such a fun way to unwind after a long days walking. It also didn’t hurt that the wine was refillable. By now you know how much I love wine. And Spanish wine is very drinkable.

-Being someone who isn’t especially athletic completing the Camino was a huge accomplishment to me. I know I surprised some of the people in my life, and I even surprised myself. I miss the feeling of accomplishment after a hard days hike.

-Getting to spend so much time with Pops was also one of the best parts. There weren’t many father daughter pairs on the Camino. In fact I can’t actually recall if we met any others. We have a pretty great relationship and he learned pretty early on that if I was in the midst of a blister melt down it was best to just leave me be. I get upset fast, but I’m back to my normal happy self equally as quick. I’d happily walk across another country with him as my sidekick.

For the last year I’d planned to blog a ton about our experiences on the Camino but every time I sit down to write I’m at a loss of words as to how to describe the whole experience. I had walked the Camino to find answers to the age old question of “What the hell am I doing with my life??” But instead I ended up with no answers and only more questions. What I did make of it is this though- that I strive to live a full life with an open heart. To be brave even when things are scary. To tell those I care about how I feel about them even at the risk of it not being reciprocated. To live without regrets. Or as Daniel puts it in the iconic Camino movie The Way……You don’t choose a life. You live one. I couldn’t agree more.