This super cute medieval town was the next stop on my mother-daughter trip way back in April. Cesky Krumlov is about a 3hr car ride from Salzburg. It’s not super easy to get to by bus or train so we booked a fairly inexpensive shuttle and had a lovely Czech guy drive us there. This small village is known for being uber romantic and is often referred to as the Fairy Tale village mostly because it looks like it’s straight out of a fairy tale. I actually feel a little jipped that my prince in shining armor didn’t come and sweep me off my feet while we were there.

We booked to stay at a hotel called the Ruze Hotel- which is super touristy. Like Asian tour bus kinda touristy. The building is from the 16th century and still carries that medieval theme, hence why the tour buses come. Our room was cute, but honestly I was creeped out for the one night we stayed there. I have way too over active of an imagination, and had I been staying there solo I doubt I would’ve gotten any sleep. There were a couple weird manikins dressed in medieval outfits that I swear were watching us every time we left our room. See. Over active imagination. Although I’m sure a normal person who has a normal imagination wouldn’t have any issues getting a good nights rest.

The old part of the town does have a magical feel to it. We checked in and immediately headed out to explore. When we stepped onto the main street there was a medieval parade procession coming down the street towards us. Of course we couldn’t believe that the locals had gone thru all that effort to welcome us and valiantly waved as around 100 medieval costumed people paraded by. Oh wait. It wasn’t actually for us. Duh. It was to mark the first day of the upcoming tourist season. Whatever. My mom and I know secretly know it was to welcome us to the Czech Republic. After our parade passed we set off to explore the town. 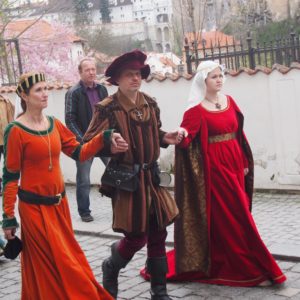 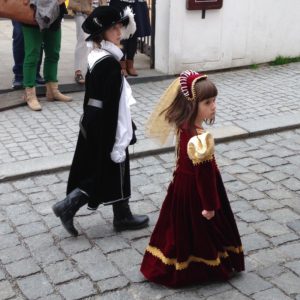 The Vlatava river winds it’s way thru the center of the old town and it really does look like a fairy tale village. The cobble stoned streets and the layered red tiled rooftops with the large and imposing castle and bell tower on the hill on the opposite bank of the river make almost every view point picture perfect. The streets are lined with touristy souvenir shops, restaurants and cafes and multiple amber jewelry stores for which the region is known for. You could easily take hundreds of photos here- just ask my mom as she filled all the storage on her phone in an afternoon. 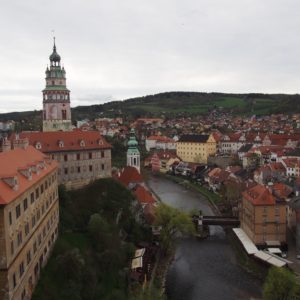 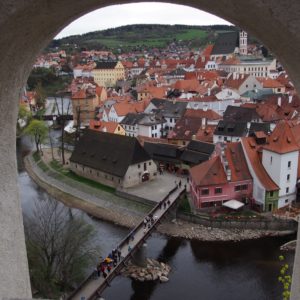 There’s not a ton to do in Cesky Krumlov other than wander the quaint cobblestone streets and visit the castle. The Cesky Krumlov castle dates back to the mid 13th century but has changed hands over the years before being given to the Czechoslovakia state in the mid 1900’s. Today it is a UNESCO heritage site. Visits to the inside parts of the castle are by tour group only, and no photos are allowed. Seriously none, unless you’re very very sneaky. Once you walk through the castle complex you can walk up a rather steep hill into the castle gardens. It was still early in the season so not everything was in bloom, but I can imagine it is colourful and gorgeous in the summer months. Some other travelerss told us about there being a bear in the moat of the castle and truthfully I thought they were trying to pull our leg. Turns out it’s true. There is a brown bear in the moat of the castle as I saw him getting fed the morning that we left. Apparently bears have been kept in the moat since the earlier 1700s. Who knew?! 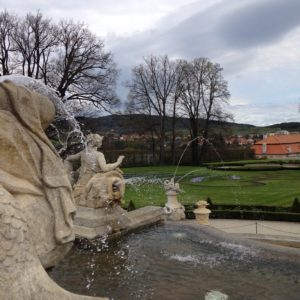 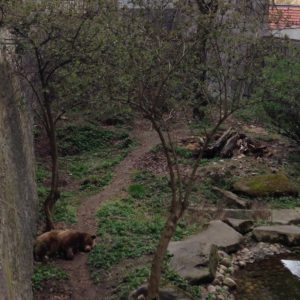 So one night in Cesky Krumlov was enough for us to take in the medieval village and tour the castle. We then took a local bus to the nearby town of Cesky Budijovice which we believe is the town my Oma (my mother’s mother in German) was born. More to come…