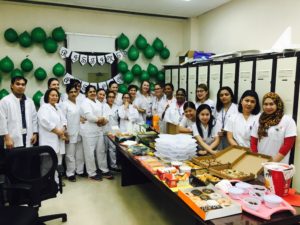 Well my 2 years here are coming to an end and it’s time to say Goodbye Saudi. At least for now. There are many things that I’m going to miss, so I thought I’d share a few of them with you….

So what’s in store for future Kristine? Well this weekend I fly to Paris for a few nights to meet up with my Pops and we will make our way to the France/Spain border to start our walk to the Spanish city of Santiago some 800km away. Fingers crossed we finish the walk around the end of October. I will stay in Paris for a month and then take the train to Amsterdam for a week and then fly back to North America via Iceland. I’ll likely be in the US/Canada for a month or so. Then if there is a position open at my current hospital and the Saudi government hasn’t introduced the rumored 10% tax to expats I’ll return mid to late January. There have been some recent restrictions here in Saudi and basically any form of internet calling has been blocked. That means you can’t use Facetime, Skype, Whatsapp or Facebook messenger for calls. I’m unclear what the rational is behind this recent development as the 9million expat workers here rely on this type of communication to speak with their loved ones back home. Then there is this rumored tax…..initially a tax system was going to be implemented in 2018, but a recent email that’s been circulated amongst expats states that it will likely come into effect in the next few months. That coupled with the planned 6% tax on money being sent out of the country would essentially mean I would be making much less than I would in North America all while being require to work an extra 32 hrs a month. But again, most of this is rumors so I’m eagerly waiting to see how it all shakes down!

So assuming those things don’t happen and there is a job in an area I want to work in I’ll most likely be back in Saudi in January for another year of travel. But that will be my last year. I promise. I know I said that before……but I really mean it this time!! But of course there’s always the chance that I really like having an apartment in Paris for a month, and access to wine and decide that what I really want after all is to drop some roots and make a permanent move back to North America. Those of you who know me I’m sure are laughing out loud at the prospect of me wanting to settle down I’m sure, but honestly I have no idea what will happen after these 4 months of travel. One thing I’m certain of though is that I will have clarity after walking some 800km. This I’m sure of!! But for now I’m going to be Paris bound in less than 24 hrs. See you soon Pops! And for my Saudi peeps- I miss you already!!