This might be a long winded post. Sorry in advance! Marrakesh is a busy, bustling city with a population of nearly 1 million. Almost. It’s Morocco’s 4th largest city and it was the most important Imperial (historical) city. We spent 2 nights here at the beginning of our trip, and nearly a week at the end with an overnight break to the Atlas Mountains. The city itself is broken up into the new and old parts. The old part has the Medina and the majority of the historical buildings, the new part has lovely gardens and trendy upscale hotels. We stayed in the old town for most of our time. Moroccans speak Arabic or French typically. Some people speak English, but often not enough to communicate in great detail. Lucky for me I speak just enough Arabic to make people clap with excitement. Unfortunately they could understand my basic formal Arabic while I was left clueless trying to understand Moroccan Arabic. Sign language would become our language of choice.

The accommodations in Morocco are unlike anywhere I’ve ever stayed. There are many, many “riads” which are Moroccan houses or palaces with a garden, and most have a pool or a fountain. They are breathtaking. And surprisingly not too expensive. Like $50-60US for 2 people a night for a nice place. One of the things I loved in Morocco was that attention is paid to every detail. You will find yourself taking photos of light fixtures, and railings, and doors, and doorknobs. It’s a little absurd really. Can you imaging if you saw tourists in Canada taking photos of bathroom sinks, the lights, and your front door?? Well, that was basically how we were in Morocco. Everything is ridiculously ornate. Good luck not taking a photo of multiple peoples front doors! 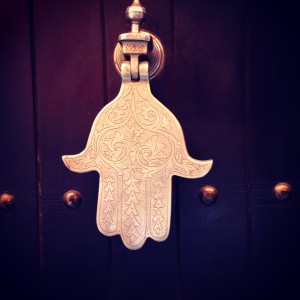 Could you resist a photo? 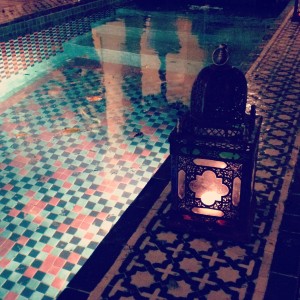 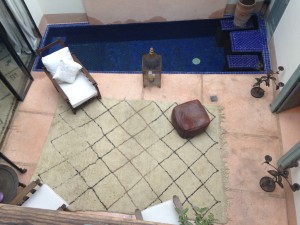 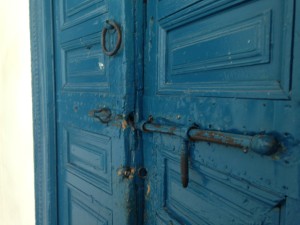 We stayed at 3 different riads in Marrakech. The medina is pretty large and the alleys are quite confusing, and also poorly lit in some areas. Often to find the place initially you have to be led there. Unless you don’t mind wandering with your luggage in 100F heat. We spent our days exploring the many old buildings, shopping in the medina, eating delicious Moroccan tajines and sipping cold beer on rooftop bars. Most of our trip was during Ramadan and this did require some adjustment on our part. Not all places were open in the daytime to eat. Most shops were open during the day and then around 6pm most of them would close up so people could break-fast with their families. Alleyways would look very desolate as it was mostly only the tourists out wandering.

There is a lot to see in Marrakech, but I’ll just highlight my favourites for you. You should definitely check out Dar Si Said. It’s part museum part 19th century home, but the courtyard and garden area, and the upstairs rooms are spectacular. Bahia Palace is quite similar but with WAY more tourists, so Dar Si Said is the place to see. Maison Tiskiwin is a cool museum that showcases North African crafts and culture. It always surprises me how similar textile patterns around the world are. In this case Berber patterns look visually similar to patterns in Guatemala and similar still to patterns in Bhutan. Another museum that I especially liked was the Maison de la Photographie which houses a collection of old photos from the early to mid 19th century as well as showcasing new work. Well worth a visit. Ali ben Youssef Medersa was founded in the 14th century and was once the largest Koran school in North Africa. It is impressive, and you can tour the uppers floors where students would have lived. The last thing that I recommend is to head on over to New Town and check out the Jardin Majorelle otherwise known as the Yves Saint Laurent memorial gardens. They are amazing. Seriously. So colourful, with fountains and sitting areas. And since you’re already there you should check out the Berber Art Museum which talks of Berber history and culture as well as showcasing tradition jewelery and clothing. 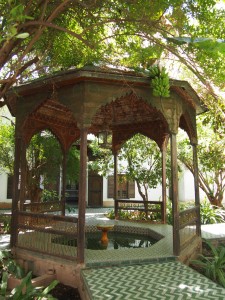 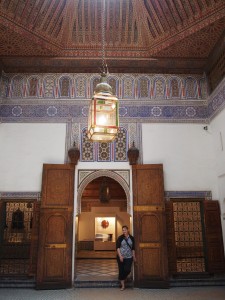 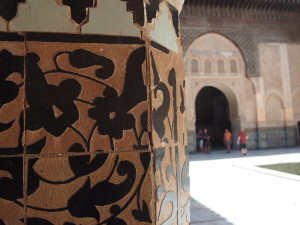 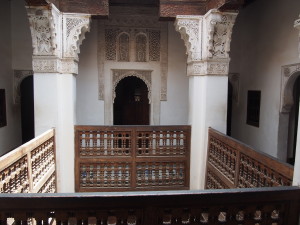 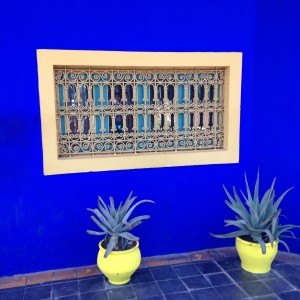 The Marrakech Medina takes up a 19km area and is full of old riads, shops, galleries and restaurants. All of the above places with the exception of the gardens are in the Medina. The main square called Djemaa El-Fna is a site to behold and not for the weak of heart. The action really gets going closer to sunset and into the evening. It’s full of pushy henna artists, snake charmers, monkey trainers, souvenier stalls, food stalls, and people dressed in traditional clothing. It’s a very happening place, but it’s difficult to walk around with out getting hassled. Regardless, it’s beautiful at sunset and there are cafes surrounding portions of the square to sit back and watch the entertainment unfold. I’ll write more about the numerous unpleasant experiences we had here in a later post. 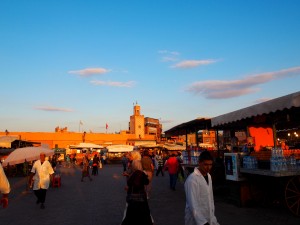 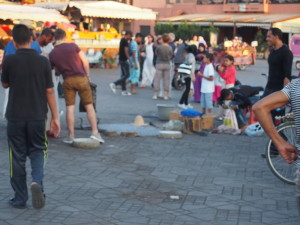 We took a side trip to the Atlas Mountains during our time in Marrakech. The Atlas Mountains stretch across Morocco, Algeria and Tunisia. Just over an hour away from Marrakech they make an easy day-trip or a quick retreat from the city. We booked one night at L’Oliveraie de Marigha and it was lovely. We relaxed poolside surrounded by gorgeous views. Since it was low-season we basically had the place to ourselves. Literally. There was only one other guest. The staff were great, and if I ever find myself back in Morocco I would stay here again for sure. 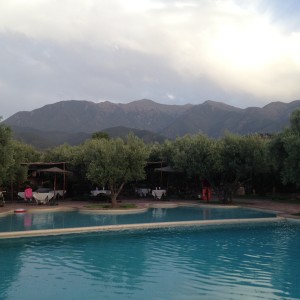 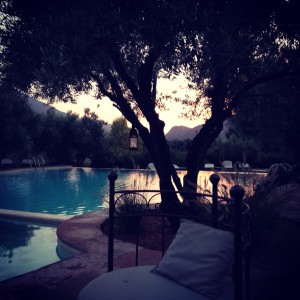 So that’s the low-down on what to see and do in Marrakech. Next up….the Imperial city of Fez…..