Firstly, this blog post contains adult language and is meant for…..you guessed it….adults. I don’t swear on this blog very often, however; swear words are needed to get my point across. Oh, and you’ve been warned. This is a doozy of a post. 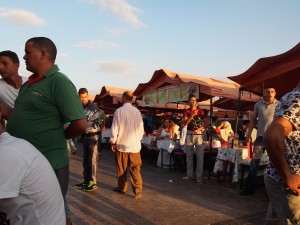 I wanted to love Morocco. I really did. But truth be told this was the first vacation ever, that I wasn’t at all disappointed to be flying away. As I’ve already written it wasn’t all bad. It wasn’t. But when it wasn’t good it was really bad, and draining, and frustrating, and I’m surprised I didn’t actually punch someone in the face. Almost all the bad encounters we had took place in the Medina of Marrakech. I imagine if we hadn’t been 2 very western looking girls we might’ve had a different experience. I’m sure if we had’ve had a man with us many of these situation wouldn’t of happened. I should probably preface this post with the fact that the majority of the places I travel to, I’m used to standing out. I have blond hair. This tends to get a lot of stares in the Middle East. Same as when I traveled in India. And Bangladesh. And Southeast Asia. Until Morocco, my western looks usually only drew stares, and occasionally a “Hello“, or “photo photo!!” But generally, nothing more than that.

Morocco was another story. The first night we went out in Marrakech we got a lot of cat calling. Mostly “hey beautiful” and “beautiful asses” was what was yelled after us. Granted I agree that I do have a beautiful ass, but generally strangers don’t make a habit of yelling this. There were a few wedding proposals, but that first night we had no idea what was in store for us. On day 2 we were walking in an alleyway when 3 young boys approached us- they were between the ages of 8-11 by guess. One of them had a water balloon and they surrounded us. The next thing we know they are pointing at our breasts, literally fingers like a centimeter from our chests and then the kid with the water balloon puts part of it in his mouth and starts sucking it like a teet. No joke. My jaw fell open and I was speechless, which for those of you who know me doesn’t happen often. They trailed us for a few minutes all the while pointing at our chests while the one little shit sucked away on the balloon. Afterwards, all we could really do was look at each other and say “well, that just happened.”

From here it only got worse. We ventured to the main square called Djemaa El-Fna. As I’ve previously reported this place is a complete cluster, and a people-watchers dream. The food stalls are delicious and super cheap. But that cheapness comes with a steep price that you pay by being publicly shamed and belittled by the men acting as touts for the food stalls. The food is sooooo good. And yet it’s such an off-putting experience to get it. Every time we went- which was a bunch of times, because of the tastiest sandwiches I’ve ever had, we had some sort of shit happen. Let me paint the scene for you. There are aisles of food stalls, and literally as soon as you start walking towards them these food touts are already eyeing you up. And they start yelling at you immediately. And oddly, they’re all talking in uber fake Australian accents, which we never could figure out why this was a plausible tactic. So they see you coming. And they’re yelling at you to get your attention, and several of them start jogging over and they surround you and start shoving menus in your face. And you’re overwhelmed. Mostly because you’re hungry and just want to be left the hell alone. We ate at the same food stalls- the ones frequented by locals and not tourists as it’s a no-brainer that they had the best food. So we would try and ignore the aggressive touts and make our way to where we actually wanted to be going. At first politely trying to say “no thanks” or “we know where we’re going” and then these overly eager food touts would literally tell us to “Fuck off then” or “Go fuck yourself” or my personal favourite was to call us fat and tell us to “Take off.” I’m really curious about how this works to bring in business, or helps Morocco’s poor economy with bringing in tourist money. If you have any insight into this I would very much love to know. Once we overcame the shock of repeatedly being told to “Go fuck ourselves” we would order our food and sit back and watch the mayhem. It should be noted that the actual people who worked in the food stalls were lovely. They remembered us every time we came back, and were never rude to us. The other reason I was so bothered by these encounters is that these touts use intimidation tactics. They will literally swarm a woman on her own, and we even witnessed them going up to young guys and literally putting their hands on their chests to try and get them to eat at whatever stall they worked for.

This same tactic was used by people who worked in shops. Many times while walking thru the Medina our path would be blocked by men trying to get us to go into their store. We would try and step around them and they would side step to block us again. Sometimes they would actually touch us- grabbing our wrists to drag us into the shop, or they would try and push us in. When we weren’t especially receptive to this it wasn’t uncommon for them the tell us to “Fuck off.” Harsh. And when is it ever appropriate to grab a woman’s wrist to physically try and man-handle her into a store? Our second last day in Marrakech a guy grabbed my wrist and tried to pull me into his store and I started screaming at him “Don’t touch me.” I had completely had enough at that point.

The other thing about Morocco is that everyone, and I do mean everyone knows where you are going at all times. They will try and tell you that you are going the wrong way- “I’m sorry sir, do you even know where we’re heading?” And they always know whether that place that you are going, you know the one you haven’t yet told them, whether it is open or closed. Often they will claim it is closed. Don’t listen to them. Walk up the street and find out for yourself. It is so annoying. If by chance they actually ask you where you are headed, just keep walking. Or tell them “your mamma’s house” and keep walking. Cause if you stop I guarantee they will tell you that you are going the wrong way, and ever so kindly try the show you the way. Except that they way they will take you will only end with you being led to the tanneries. We learned this the hard way. Twice. It’s very obvious that if someone shows up with tourists to the tanneries they get a cut of whatever the tourist buys. Luckily, you can smell the tanneries before you actually get there, so you’ll quickly clue in if that isn’t your desired destination.

Obviously it wasn’t all bad, and we did meet some very kind and friendly people. And I’m not saying that you shouldn’t go to Marrakech or Morocco. I’m just saying that if you are a woman and you look at all western you should be aware of the shitstorm that will likely follow you everywhere. I’m also writing this because you never know- someone from Morocco might read this and say “these don’t seem like great tactics, maybe we shouldn’t bully and shame the very people who we are relying on to help our economy.” I’ve been torn about how to describe my time in Morocco because it really pisses me off to think if only we had a man with us many of these things wouldn’t have happened. NEWSFLASH Morocco– woman travel solo, or in pairs and its 2015. We shouldn’t need to have a man with us just so we don’t get harassed. Oh, and also just as a general rule…when you tell someone to “Go fuck themselves” this is not conducive to business. Nor does it make me stop and think “on second thought maybe I do want to look in that store after all.”

I’ll end with the fact that Morocco was beautiful, the food was excellent, and as much as I wanted to like it, when people ask me how my trip there was I’m conflicted as to what to say. So I say exactly this: it was a hard country to travel in. The hardest I’ve been to. And yet, I feel like I have unfinished business with it. I’ve traveled to 40 countries now, and this was the first time that I’ve left a country feeling like this. So Morocco, we might just meet again in the future, and if we do could you lay off the “F” word pretty please.

Did you have a similar experience traveling in Morocco? Have you ever traveled somewhere that you thought you would love, but didn’t?