A person can’t talk about Morocco without talking about the food. Moroccan food is spectacular. I seriously don’t think we had a bad meal. How often can you say that on a 2 week trip?! Often once you sit down at a restaurant complimentary olives are served, and lucky for me, my Yankee sidekick hates olives. So yay, more olives for me. We would start most meals with Moroccan salads. They consist mostly of cooked vegetables perfectly seasoned. I’m talking pureed eggplant with garlic, paprika, and cumin so it tastes super smoky, or sauteed zucchini with Moroccan seasoning, or a flavourful beet salad, or boiled and marinated carrot salad. Yumm right?! We would then usually share a tajine with couscous. For dessert there were delicious choices of pie, pastries, Moroccan cookies with almonds, or a simple plate of orange slices sprinkled with cinnamon. Also before or after meals mint tea was served, which is probably the most popular drink in Morocco. It’s delicious- I always have mine sweet (with sugar) but you have the option of no sugar also.

Tajines are traditionally from North Africa, and there are many different varieties that often resemble a stew. The tajine pot is ceramic with a wide bowl like base, and a funnel type of lid. Historically they were cooked on charcoal, but present day they go on the stove-top. The tajines we tasted typically were lamb, beef, or chicken although there are vegetarian options available. Often they combined both the savoury flavours of the meat and paired it with sweet flavours of either mango, lemons, prunes, or almonds. Tajines are super tender- the meat often pulls away from the bone, and they are meant to be paired with either bread or couscous. The lemon chicken tajine was always good, as were the beef with vegetabes ones- it reminded me of a wintertime stew. Moral of this food story- you can NEVER go wrong with a tajine.

On the off chance that we were tajined-out (is that even a thing?) we would head to the main square in Marrakech (Djemma El-Fna) to eat the street food sold at the stalls there. It was so very good, and so very cheap, but the verbal assaults one had to endure to get this delicious food came at a cost. My next post will be about the negative side of Morocco, but for now we’re talking about delicious food. There is a soup called Harira soup that is super good and seeing as it was Ramada people would break their fast with this soup and a hard boiled egg. It’s similar to what we in the west think of as minestrone soup, and it’s a tasty treat. Also super cheap. The other thing that we tried many, many times, and that I have serious cravings for,  were these petite sandwiches. The one that I fell in love with took half a pita bread and mixed together cooked potato, a boiled egg, soft cheese, oil, salt and pepper and chilli powder. So easy, and literally the best sandwich I’ve ever had. We must’ve eaten at the square at least 5 or 6 evenings, as Harira soup and the petite sandwiches were so good. If you go- get your sandwiches from stall # 66. All the locals eat there, and everyone knows if the locals eat there the food will be dang good. 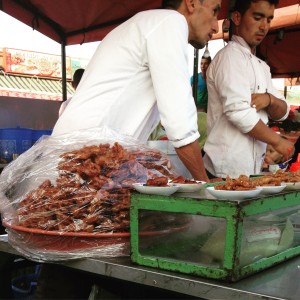 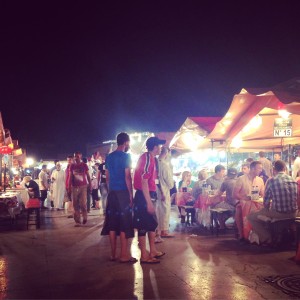 On my second last day in Morocco my Yankee side kick and I took a cooking class in Marrakech. We decided on Souk Cuisine because in addition to the cooking class we actually spent part of the morning buying the ingredients in the Medina and visiting a spice market. The class was taught by Gemma who is an ex-pat from Holland who has lived in Marrakech for the last many years. We met in the main square- there ended up being us and then 2 other couples on the tour. We were given shopping lists and bags, and led into the Medina in hunt of the ingredients. This was a great way to leisurely take in the markets, as well as be able to take some great photographs as we strolled past jars of olives and preserved lemons, past fresh local produce, and butchers selling fresh meat. We even had to arrange for fresh chicken- and I mean pick a chicken for the butcher to kill and pluck. This was hard for me- I’m not proud of this fact, but I like to be completely ignorant of where my food comes from. This was a little too real. From here we got a tour of the local spice market. Moroccan cooking uses a lot of saffron, paprika, cumin, turmeric, ginger, and cinnamon. 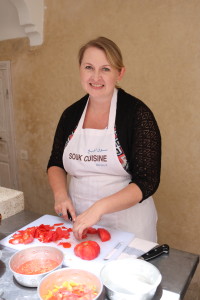 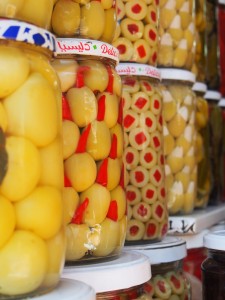 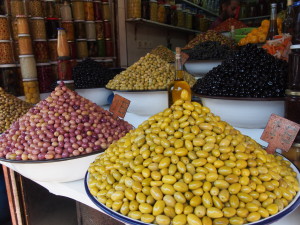 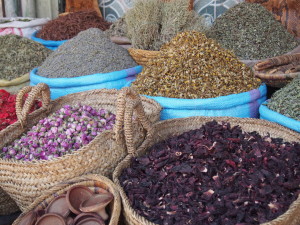 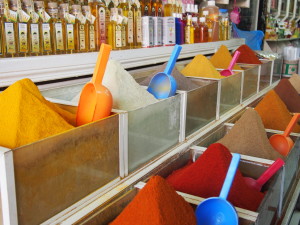 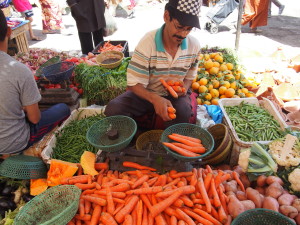 After we picked up all the ingredients needed for the cooking class we headed to a nearby house to start the cooking portion. In addition to Gemma we also had 2 Moroccan ladies assisting with the food prep. The menu changes, but for our class we prepared Moroccan salad with fresh tomatoes, zucchini salad, carrot salad with almonds and raisins, eggplant salad, a sardine appetizer, chicken tajine with carrots and chickpeas, and for dessert Moroccan sugar cookies. Since I have zero domestic skills  I was given the simple tasks- you know the ones you would give to a child. Yep. The real cooking was left to those with more experience. 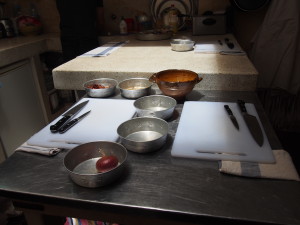 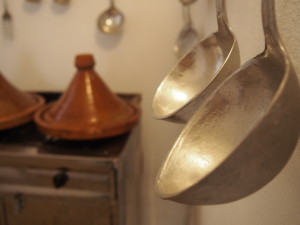 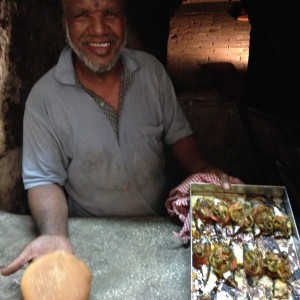 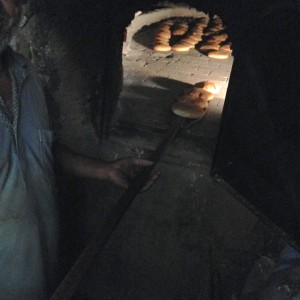 Part way thru the class my sidekick and I were left with the task of taking the sardine dish to the local communal bakery where it could be baked at high temperatures. There are communal bakeries in every neighbourhood where local women bring their daily  bread as well as other dishes to be baked for a small fee. We dropped off the dish and went back 30 minutes later to collect it. The men working there were naturally quite taken with us, wanting to show us how the oven worked, how deep it was, and the main baker posed for photos. Fun fact: the oven was super deep- he would shove in this long piece of wood and pull out like 20 loafs of bread. It was a really fun experience, and one that we wouldn’t have had were it not for this class. After the cooking was finished it was time to taste our creations, perfectly paired with chilled Moroccan white wine. It was a lovely afternoon. I would highly recommend a cooking class if you’re planning on traveling to Morocco.

Have you taken a cooking class while traveling? Did you recreate the recipes once you got back home?