My Abaya is trying to kill me……

So I’ve already spoken about how when women are out in public they must wear an abaya (aka Little Black Dress.) I didn’t love it the last time I was here, but besides it being hot in the sun it wasn’t that big of a deal. Either that, or I have selective amnesia from the 15 months I spent here and completely blocked it out. My experience this time is a different story. I firmly believe that my abaya has made several unsuccessful attempts to kill me. 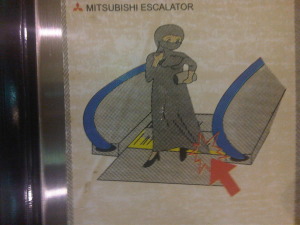 First its a little bit too long so she likes to try and trip me, pretty much all the time. Then she conveniently tangles herself in the wheels of the grocery cart or gets herself caught in the door of vehicles. When I try and sit down she pulls herself tight on my neck nearly choking the life out of me, and then she makes a fool out of me as I have to stand up several times to get her in the right position so I can comfortably sit and also be able to move my arms. The other day I was at Ikea and she was taunting me with the idea of getting herself caught in the escalator. Her only redeeming quality thus far is that I spilled half a Starbucks pumpkin spice latte down the front of me and she soaked it up like a professional and no one could even tell apart from the fact that I smelled delicious. The End.