A few months ago my kiwi sidekick and I had the genius and super impulsive idea to book tickets to Oktoberfest. We found a direct flight from Riyadh to Munich and a return ticket via Frankfurt so we opted to pop over for 5 days. We just kept saying YOLO (You Only Live Once) which is a super annoying phrase, but one that I am nonetheless very fond of. So book plane tickets we did. In hindsight, we probably should’ve looked a bit more into hotel prices. Because when we did, we were a little alarmed to find that really the cheapest rooms we could find were between $200-250 per night, and that they were located in the glitzy (sleazy) red-light district. Lap dance anyone?

So after working a 12 hour shift we raced home, showered and grabbed our bags for our midnight flight. This had us landing in Munich just before 6am on very little sleep. We had tried to get an early check in, but alas, they were fully booked. We had also considered booking a cheap airport hotel to grab a few hours sleep, but we were far to cheap to pay the $175 rate. So we did what any cheap travelers would do and found a bench in the arrivals terminal and tried to grab some shut eye. Then we went for a greasy breakfast and an 8am beer. Don’t judge. It was Oktoberfest. Once we got our breakfast buzz on we went to a ridiculously over priced authentic German store and bought traditional German beer maid outfits. I’m still cringing to think what we paid, but luckily, I can re-wear it for Halloween, as Ms Claus for Christmas, and any other costumed occasion that comes up. We then took the train into Munich.

By some stroke of luck we were able to finagle the hotel into letting us into the room, so we could change quick-like, and get to the Oktoberfest grounds. I had joined an Oktoberfest group on Facebook, and we had plans to meet up with a group who had booked several tables at Hacker Festzelt, one of the large tents. After making our way thru a sea of traditionally dressed people we met up with our group and entered the tent. They are enormous and most fit thousands of people. Our group was a mix mash of Germans, Brits, a couple Kiwis and a Canuck. We spent 5 hours drinking steins of beer and eating traditional German food. We also spent 5 hours yelling Prost at the top of our lungs, making up our own words to the popular German songs being sung and clinking our steins together as often as was humanly possible. By 5pm I was spend, over tired, and mildly mis-behaving. We made our way back thru the sea of now overly drunk traditionally dressed people and back to our hotel. 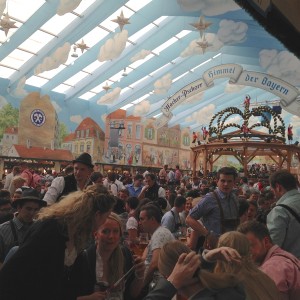 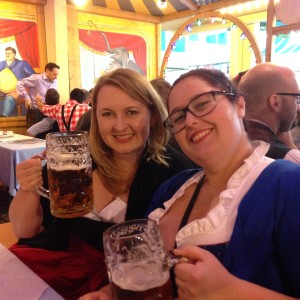 Day 2 found us not nearly as hungover as I had imagined we would be. We grabbed breakfast at the hotel and headed to the Marienplatz clock tower with the hoards of other tourists to watch the 11am show. Basically there is music and apparent life-sized figures that depict some type of story. It was underwhelming on account that my eye sight is crap, and there were way too many people. We continued along to Munich Residenz a former palace which used to be home to Bavarian royalty. It was pretty cool. We spent a while roaming thru the courtyards and rooms. It is opulence at it’s finest. The Hall of Antiquities was my favourite as it had wall to ceiling paintings and statues- it would’ve creeped me out to be there after dark, but in the day light I could’ve spent more time taking it all in. From here we went for a traditional German meal (because you can really never eat too much pork) and hustled back to the hotel to don our Germanic attire. 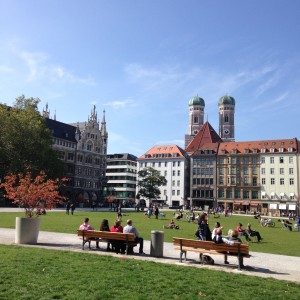 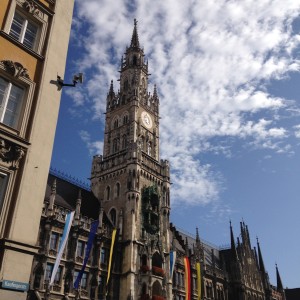 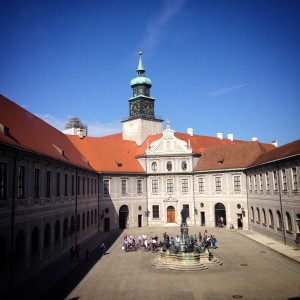 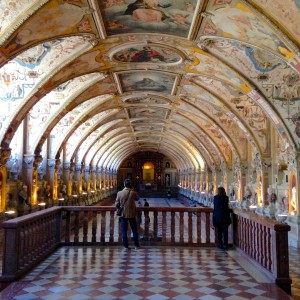 Back to Oktoberfest we went to meet up with a smaller group from the previous day. This time we were at a different tent in the upstairs balcony area of Schottenhamel Festzelt. It was much nicer being in a smaller group and especially nice since we had met most people the day before. Again more beer drinking, more pork eating, more Probst yelling, and more beer stein clinking. Personally, I liked this tent better because they played music in English which we could sing along to. At one point I was standing up from the table and this youngish guy sidled over to be and started chatting. 1st he tried German, which I promptly told him I didn’t speak. Then he switched to English and the story went something like this “my friend over there. See him. He is very drunk. He spilled a drink all over the table. Now our table is very wet. His father is very rich and has bought us this table, but he is not coming. We have some friends that are also coming.” All the while I’m nodding along because I’m confused as to where this story is going. Then he says “so before our friends come we would like to have a couple beers.” And I’m all like “ok.” Cause I still haven’t clued in yet. And then he tries to order beer from me. Because he thinks I’m a German waitress. Yep. In hindsight I wish I had been quicker on my feet, and told him that each beer was 25euros and at least made a little money off the whole thing. Next time I’ll be on it. 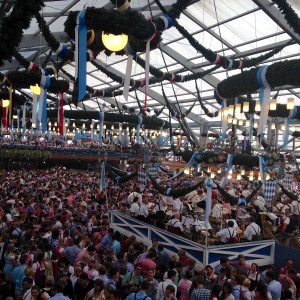 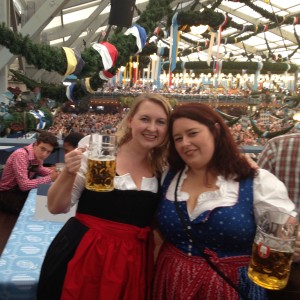 We only had our table reservation for 3 hours, then it becomes a game of cat and mouse to see how long you can stay in the tent before security kicks you out. And since it was late in the day, and also the last weekend of Oktoberfest things were a real shitshow. Everyone is pushing, and trying to get past security, and fights are breaking out, and overly testosteroned young men are having fist fights. My kiwi sidekick and our new British friends decided to take the party to a nearby bar as it was highly unlikely that we would get into any of the other Oktoberfest tents. The Oktoberfest grounds are pretty large and surrounded by grassy hills which people also use to pass out and vomit all over. Seriously. People are wasted and stumbling, and sometimes you just need to close your eyes in the closest place that looks comfortable. I get it. We’ve all been there. The nurse in me had to resist rolling all these drunks onto their sides into the recovery position for fear of them aspirating. 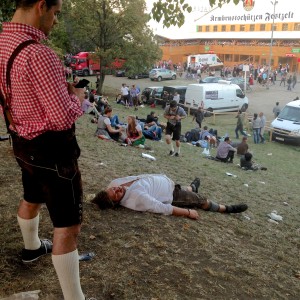 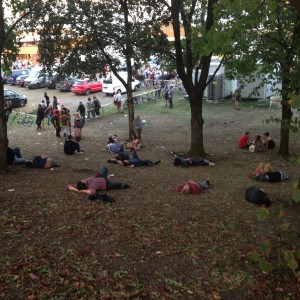 So after consuming some more beverages we wandered back to our hotel. Things were looking pretty good until shortly after we got back when I got the worst GI bug of recent time. Now I know you’re thinking- girl you were just drunk. But I’m a classy drunk. I never vomit (well hardly ever.) I won’t go into detail, but suffice to say that I lost 2 days of our trip. It was awful. I was miserable. If a fire had broken out in the hotel I doubt I would’ve had the strength to evacuate. My kiwi sidekick was a real trooper and nursed me back to health, well mostly.

On the 4th day I was able to venture out. We took the tram to Nymphenburg Palace. The tram drops you about a 10min walk to the main gate- for me this took what little energy I had, but I’m glad we ventured out. Part of the palace is under renovations, but the gardens are beautiful. Funfact; you could actually skip paying to go inside, and instead take pictures from the outside and wander the 490 acre gardens. Bring a picnic and sit next to the canal or on the shore of one of the two lakes. The place itself was completed in 1675 and served as the summer home of Bavarian royalty. The rooms are ornately decorated with some very impressive portraits lining the halls. Be sure to visit the Marstallmuseum before you leave. It’s full of old carriages and winter sleds which are a contrasting mix of opulence and absurdness. We wrapped up our last day with me finally starting to get an appetite for things other than 7-up and soup broth. Unfortunately, this coincided with my kiwi mate getting whatever bug I had. We might be the worst travelers of all time. 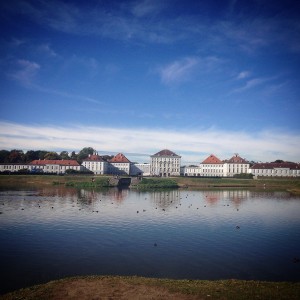 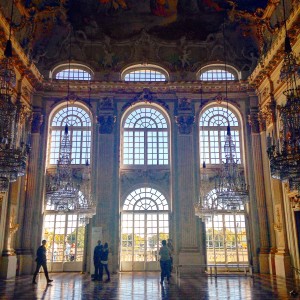 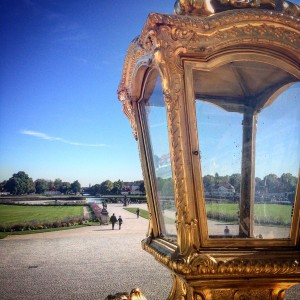 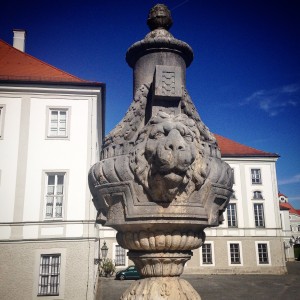 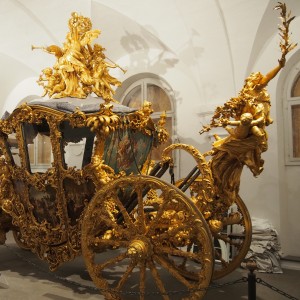 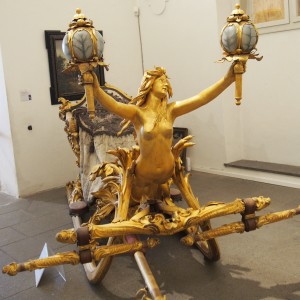 Munich- you were hard on me, but I fully intent to come back. We have unfinished business!! As they say in Germany- Prost!!!