Back in April I met my mom in Munich for a whirlwind tour of Austria and the Czech Republic. We had only 11 days to pack in Salzburg Austria and then making our way up thru Czech to get back to Munich so we could both fly out. Originally, we had planned to include Slovakia in our itinerary but we decided to cut Bratislava out as if was too much to pack in. The more I travel and the older I get the more I know that I get extremely cranky if I have to move hotels every night and if a portion of everyday is spend on a bus or train. I have become very fond of slow travel. The kind of travel where I get to see the sites but also where I can sit in cafes and sip cappuccinos or have a glass of wine while reading a book or people watching. I’m also not a huge fan of only seeing bits and pieces of a city. If I go some where I want to see all the things I want to see. That way if I love it I can always come back, but more likely than not I’ll be inclined to go somewhere new. I don’t like having unfinished business with a city.

We both arrived in Munich within a few hours of one another. Mom late morning, and me early afternoon. We had decided to bypass Munich all together as there was a festival going on the weekend we arrived and hotel prices were like $400 a night, and also I had been in Munich in the fall for Oktoberfest so I was happy to head for Austria. Conveniently, Postbus has a bus that leaves from Munich airport terminal 2 and goes directly to Salzburg airport. It takes just under 3 hours and they serve wine and beer on the bus so I’d say it’s a pretty great score! The only thing is once you arrive at Salzburg airport you’ll have to grab a taxi or take a local bus to get to the city center.

We had 2 nights in Salzburg, but really only one full day since we arrived late in the afternoon. We decided to get tickets for the Hop on Hop off bus since that was the best use of our limited time. Be forewarned. Salzburg is beautiful. We really could’ve used another day there. I would have loved to explore the surrounding countryside, but alas, we didn’t have time. The hotel we stayed at which wasn’t that impressive so it shall remain unnamed was located very close to Mozart Square- which is a very walkable area, and coincidentally it’s also a stop on the Hop on Hop off bus. So we boarded the bus. Initially we had some difficulties with the headsets given to us. Neither mom or I could figure it out until a kind passenger showed us that what we were attempting to plug the headsets into was actually a screw hole, and not in fact the socket for the headsets. You can’t be smart all the time.

First stop on our quick as lightening visit to Salzburg was Leopoldskron Palace. It’s nicknamed the “Sound of Music Palace” as some of the movies outdoor scenes were filmed here. Am I an awful person if I admit I don’t think I’ve ever seen the movie? Like seriously. Don’t hate me. I always hear girls say how this is their favourite movie. Maybe after being there this will give me a reason to watch it. Regardless, the Palace is striking from the outside. The only thing is that it is not a public building, it’s actually a private hotel. We just waltzed up (not literally although it would’ve been fitting) and the gate was open so we made our own little tour. Only to realize upon leaving that there are signs outside saying no entrance unless you are a hotel guest. Whoopsie. So if you go, maybe pretend you didn’t see the sign like we did and hope that the gate is open! 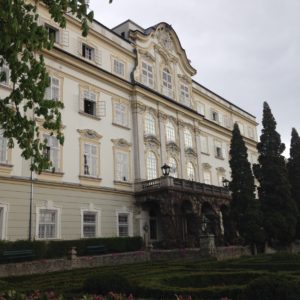 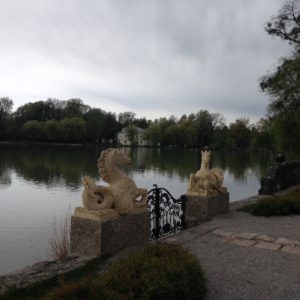 Next stop was the Hellbrunn Palace, which if you do nothing else this is what you should see. This Palace was built in the early 1600’s and was intended as the day residence for the Prince-Archbishop of Salzburg from that time. In fact there was no bedroom built at the Palace to prevent overnight sleepovers. We wandered thru the well manicured gardens and past the large decorative pool which cast beautiful reflections in the mid-morning light from the statues alongside the pools edge. We also passed by the glass Sound of Music Gazebo. If you are a fan this may thrill you, I was quite honestly underwhelmed. The main thing that the Palace is known for though are its trick fountains. Makes you curious right….like what the heck is a trick fountain? Honestly we had no idea, but we happened to arrive when an English tour was leaving so we joined it. As it turns out the Palace’s original owner was quite the trickster back in the day, and he installed many water features throughout the area behind the Palace to entertain, and often surprise his unsuspecting guests. As was common for Palaces of that time there are lovely fountains, but the Archbishop installed hidden jets and streams of water that would shoot out in every direction and soak his visitors. He even had an outside wine bar type area where guests would be soaked as jets of water would shoot up from the base of their stools. Everything is original and water powered. One of the separate grotto type rooms was the “Bird Room” where when you walking in the water moving within the walls gives off the sounds of multiple birds singing and clucking. There were several miniature scenes where the pieces moved- again all powered by water. I found it really fascinating but watch your electronics if you go. Put them away if you don’t want them to get wet. Because, trust me, you’re going to end up wet! 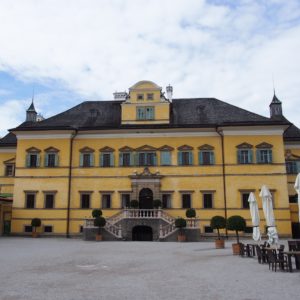 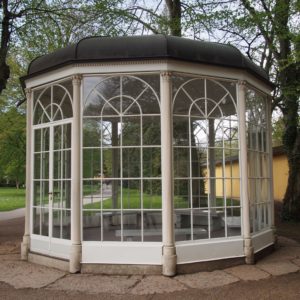 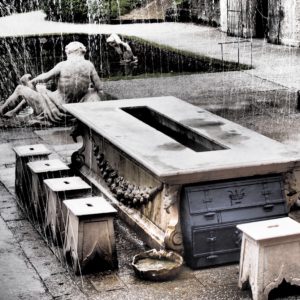 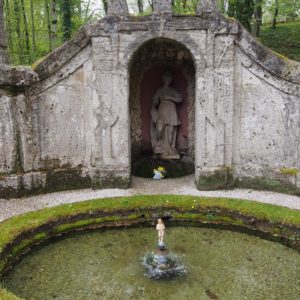 From here we hopped back on the bus and got off at Mirabell Gardens- a very well maintained and colourful garden with the Fortress in the backdrop. We then made our way back towards the hotel and took the funicular up to Hohenzsalzburg Fortress. This fortress is one of the largest medieval castles in Europe and is a great vantage point from which to be wowed by the stunning views of the surrounding countryside. Construction of the fortress began in the late 11th century. The fortress resembles a small city with different levels and courtyards. There are some interesting exhibits within the walls, but really the whole point is to take in the views. We had a late lunch at the restaurant there that surprisingly had good food and wasn’t super expensive given how touristy it was- we only ate there so we could gaze out the windows as the clouds rolled in and changed the lighting on the nearby hillsides while we stuffed our faces. 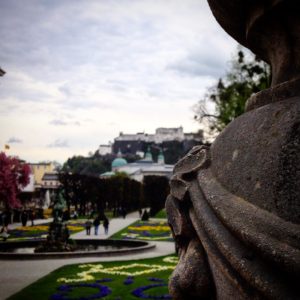 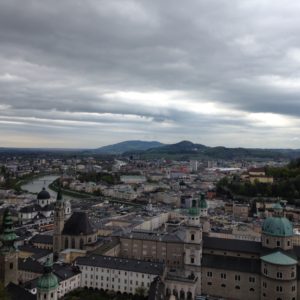 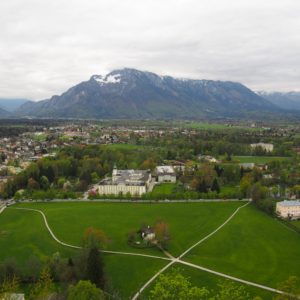 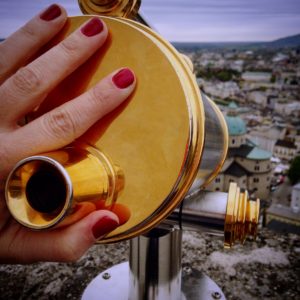 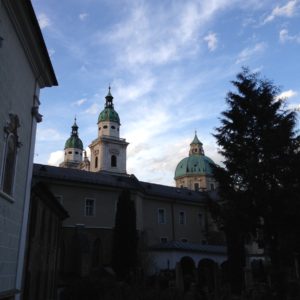 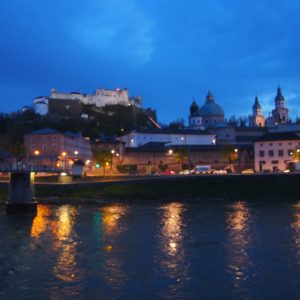 The rest of our limited time in Salzburg was spent wandering the many churches and visiting St Peters cemetery which is back up the hill towards the Fortress. In this cemetery are catacombs and you can climb up to see the caves of this church that is built into the rock. Mom was not super keen on it, but she rallied and was quite the trooper. She didn’t cry once and actually made it to the top! I was very impressed! We also walked along the Salzach river which cuts through the city. From the opposite bank of the river the nighttime views of the Fortress are spectacular. And that pretty much wrapped up our time in Austria. The following morning we took a shuttle into the Czech Republic where we spent the rest of our trip. More on that soon……..