Growing up in Calgary Alberta I was used to weird weather phenomenons. Some days the weather felt like it ran the full spectrum of the 4 seasons. It could be a bitterly cold -25C winter day and yet the skies could be blue and the sun shining. Or it could be a full-on blizzard in June. One thing we didn’t get though, were sandstorms. 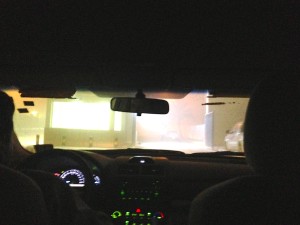 On Wednesday, I was at work and people kept talking about the wind picking up and that a sandstorm was coming. Working indoors makes it hard to get a clear (sandy) idea of what is actually happening outside the hospital walls. Sandstorms literally roll in like a huge wall of sand that clouds over the entire city. It gets very dark, and the sun is mostly blocked out to create this golden/brown aura. And then you start to taste the sand. And its a taste similar to dirt (not that I eat dirt people!) but it has a very dirty, gritty type taste and smell to it. Things start to look truly apocalyptic once you see people walking around the hospital compound in various types of medical masks with face shields thru the haziness of a sandstorm. It’s eery. 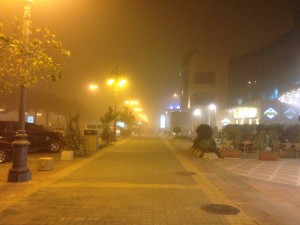 Now sandstorms and snowstorms do have an awful lot in common. They both make for terrible driving conditions. The wind causes the sand to literally drift across the road just as it does with blowing snow. Visibility gets very poor and it  becomes a near “sand-out” (white-out) conditions. Drivers for the most part slow-down and put their flashers on, or pull over to the side of the road. Unlike a snowstorm there is no shoveling to clean up the aftermath of a sandstorm, but there is a 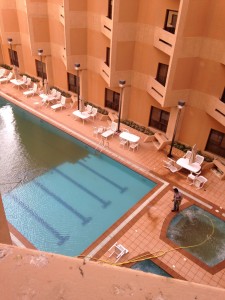 whole lot of sweeping and wiping everything down. Because even though you might have your housing area sealed up the sand finds a way of getting in. Walking in my apartment complex the ends of the hallways were hazy. Inside my apartment unit, there was a thick layer of sand coating everything. My tiled floor was super slippery. And the really gross part is that we breathe all that sand in. It’s a great way to pick up a respiratory infection. I tend to cough a lot and my voice sounds quite hoarse. It’s not very pleasant. The outdoor pool areas fill with sand and take on the resemblance of a beach area, instead of a chlorinated pool. I would hate to be a pool cleaner here.

I spent Thursday and Friday cleaning and wiping everything down. And today, the 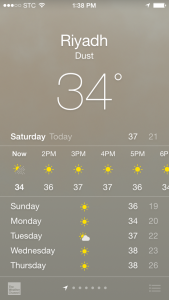 weather forecast is………..you guessed it. Dust. Seriously. I guess I cleaned too soon!