I’ve been a little absent on my blog, but rest assured I’ve got a lot of new posts coming, once I get my thoughts in order. It’s been just over 2 weeks since Pops and I finished up the Camino, and we spend the beginning of November chilling in Paris. Chilling because it’s actually been pretty damn cold. We did some sightseeing checking things off Pops Paris bucket list and not giving our feet and legs the much needed rest that they deserved. Pops has returned to Canada, but one of the major things that he wanted to do during our time in France was to visit Vimy Ridge War Memorial. It just so happened that the first weekend in November the Veteran Affairs of Canada hosted a memorial service there. So we bought tickets and took the high speed train from Paris to Arras, the town closest to the site. The train takes about 50min. We ended up staying in Arras overnight because the memorial service times and the train times didn’t allow us to make it a day trip. 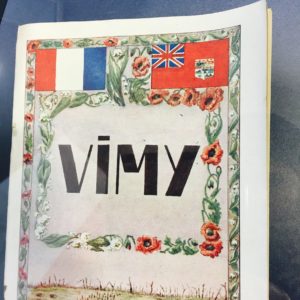 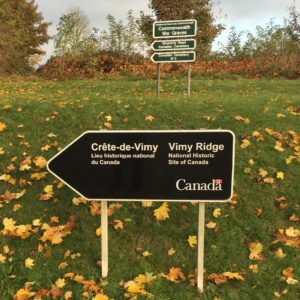 Vimy Ridge is of huge historical significance for Canadians. I’m sure most Canadians would recognize the name, but given my WWI history isn’t so great (and I’m assuming the same can be said for some of my readers especially my dear cousin Amber) I’m going to give an overall summary. WWI started in 1914 when Austria- Hungary declared war on Serbia. Because of treaties with neighbouring countries this then drew Germany, Russia, Great Britain and France into the conflict. Once Britain declared war this automatically brought Canada into the war. In 1914 Canada was still a relatively new country and this war was the first time Canadian forces fought as an independent force. By the end of the war 67,000 Canadian soldiers would be killed and 250,000 would be wounded. WWI or the “Great War” as it was known ended November 11, 1918

The battle at Vimy Ridge was fought over a 4 day period in April 1917. Basically German troops held the high ground prior to the Vimy Ridge assault and Canadian forces were credited with reclaiming the high ground from the Germans and this was essential for the advance of the British Army from the south. This victory though, came at a very steep cost. There were nearly 3,600 men killed during those bloody 4 days and over 10,000 wounded.

The Canadian National Vimy Memorial stands as a reminder to all those who served and risked their lives or lost their lives during WWI. The monument stands on soil that saw some of the most vicious fighting overlooking the Canadian battleground. The monument is imposing as its white marble stands in contrast to the surrounding hillside and skyline. The night prior to the memorial service we met some fellow Canadians (we started chatting with them trying to figure out where they got their poppy pins from) and they ended up being from Veterans Affairs Canada and were involved in the ceremony the following day. Being the nice Canadians they were they gave us their poppies and told us to meet them in the parking lot after the service for whisky shots. I liked them a lot.

The morning of the memorial service was blustering cold. The wind was raw, working itself between the seams of our jacket and scarfs. We arrived a couple hours before the memorial service was to start. The entire site is quite large consisting of a visitor center, the monument, a cemetery and then the German and Canadian tunnels and trenches. There is also work taking place to enlarge the visitor center by next year in time for the 100 year anniversary of the battle. We spent some time wandered thru the trenches and then walked back towards the monument. Much of the area is roped off with warning signs of the possibility of unexploded shells and bombs. So people aren’t allowed to walk thru the fields but nearby farmers do allow their sheep to graze thru this area. As I mentioned there is a cemetery, so we walked down to have a look. Most of the graves were unmarked inscribed with the country and sometimes the Battalion of the troops involved. Occasionally there were graves with names. We were the only visitors at the cemetery during our time there. The grave stones were lined in long rows and the cold wind blew the changing fall leaves across the cemetery. The occasional grave was adorned with flowers that had long since died or had a single poppy planted in front the petals still bright red. There was a certain heaviness in the air of all that had been lost during those 4 days nearly 100 years earlier. 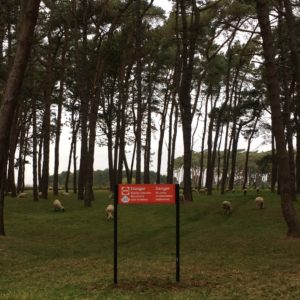 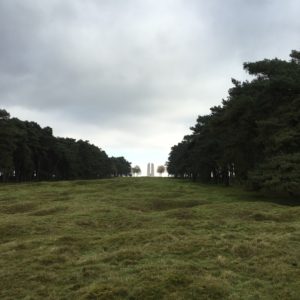 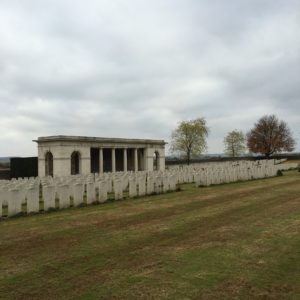 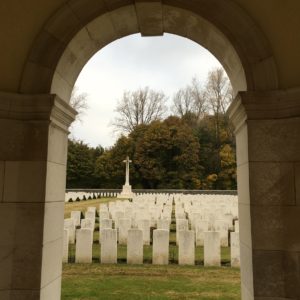 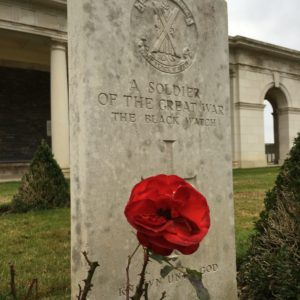 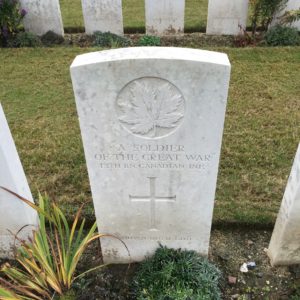 We took our time walking back towards the monument. The walkway up to the monument was packed with Canadian troops. Many young, but also several older servicemen. Some were Air Force, some Army, some Navy. Some wore green and others blue. There were a few ladies in the mix. Walking between them was one of those moments where you are filled with complete pride for your country, and for those who continue to risk their loves to protect it. The  backside of the memorial is adorned with 2 large statues of a man and woman on either side of the stairs both appear to be mourning. They are known as “The Mourning Parents.” Around both sides of the monument are the engraved names of those Canadian soldiers that died in France. As you walk thru the monument passing by the “Mourning Parents” you come to the front side of the monument and can stand staring up at the 2 large columns in front of you. There are several statues carved into the pillars. One statue stands out more than the others though. It’s of a young woman wearing a cloak. Her sorrow-filled face turned down towards the field below. 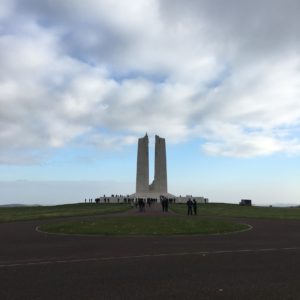 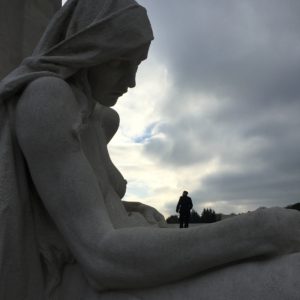 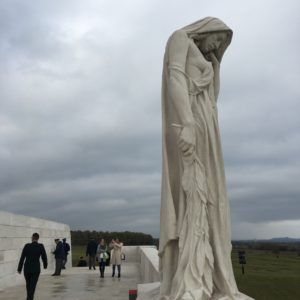 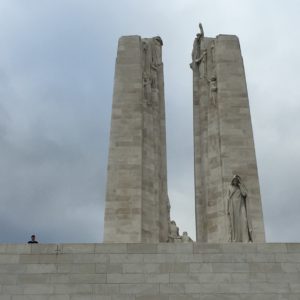 The memorial service started a little before 11. I’m guessing there were a couple hundred people in attendance. There were some government dignitaries and the service was conducted in both French and English. Lining the front wall of the  monument were the retired servicemen and women holding flags throughout the service. Some songs were sung, poems read, wreaths laid and a moment of silence to honour the dead. It was really special to be able to attend a memorial service honoring Canadian soldiers on such a historical site. By the time the service was over we were frozen. The rawness of the air had numbed our toes and fingers and it was time to get on our way. Luckily, we ran into the Canadians we met the night before and true to their word we followed them to the parking lot for shots of whisky. This seemed like a fitting end to the service and proved an excellent way to warm up! I have never been a fan of scotch or whisky, but I can know proudly say that there is a type of whisky made in Eastern Canada that has maple syrup added to it and it is divine. And coincidentally, it would make an excellent stocking stuffer with the holidays coming up. It’s called Sortilege. So good. 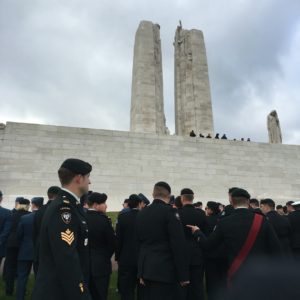 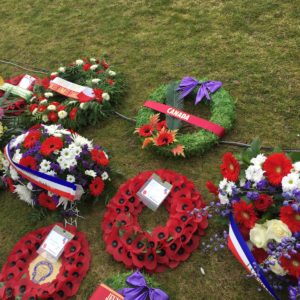 After we warmed our insides with the sweet deliciousness of maple syrup whisky we walked back to the visitor center and had a tour of the underground tunnels and trenches. The Veteran Affairs of Canada has a program where Canadian university students can apply and become guides of the site for a semester. Applicants must be bilingual, but if you know a student that is interested you should encourage them to apply. It’s a really cool program. Our guide was Patrick from BC and he was awesome. He took us through the tunnels and talked to us about what it would’ve been like for the soldiers of that time, and preparation that went into the battle at Vimy Ridge. We then walked thru a small portion of the Canadian trenches. It’s hard to imagine the inhumane conditions those soldiers lived in.  How cold, and wet, and scared and hungry they must have been. It’s unimaginable really. We then stopped in the visitor center so Pops could buy himself a book and made our way back to the city of Arras and to the train that would return us to Paris. 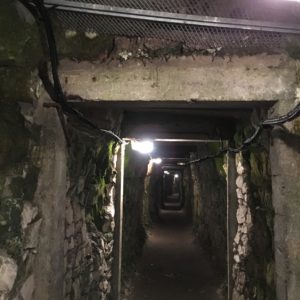 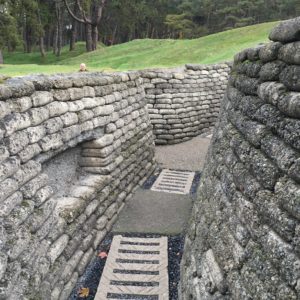 If you are in France (and Canadian) I would encourage you to visit Vimy Ridge or the Beaumont-Hamel Newfoundland Memorial which is nearby. Pay your respects to those who lost their lives in honour of our country. My patriotism always comes out when I glimpse a Canadian flag on foreign soil. 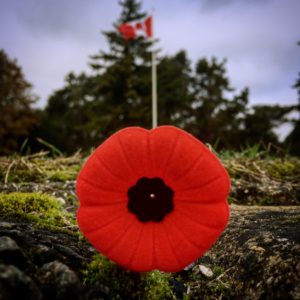 “In Flanders fields the poppies blow

Between the crosses, row on row,

That mark our place; and in the sky

Scarce heard amid the guns below.

We are the dead. Short days ago

Loved and were loved, and now we lie

Take up our quarrel with the foe:

To you from failing hands we throw

The torch; be yours to hold it high.

If ye break faith with us who die

We shall not sleep, though poppies grow

Written in 1915 by Lieutenant-Colonel John McCrae