Way back in June I took a solo trip to Warsaw Poland. I honestly don’t know where the time has gone?! How is it already November? How am I currently 5 months behind blogging about this trip? Well…..better late than never I guess…. Poland honestly wasn’t a country I knew much about before visiting. Originally, I had planned to split my time between Warsaw and Krakow but seeing as I only had 6 nights and I did want some down time I decided to just visit Warsaw and save Krakow for another time.

My initial impression of Warsaw was that it was so green. There was recreational space all around the city which reminded me a lot of large cities in Canada. Coming from Saudi Arabia where one never really sees much green I’m sure I noticed it that much more, but still it gave the city a clean and open feel to it. The older I get the more I like to stay somewhere comfortable. Especially if I’m traveling solo, I want to stay somewhere were I feel safe going out at night and where things are walking distance from my hotel. I’m happy to pay a little extra to be in the center of the action and not have to waste time commuting into the city. I opted to stay on the border of the Old City- it was an easy 10-15min walk to get to most city sites, and there are tons of cafes, bars and restaurants in that area.

I spent most of my time in Warsaw exploring the Old Town, the castle, the square and drinking glasses upon glasses of wine paired with delicious food. Warsaw has several different free walking tours with different themes that meet in the Old Town area. They are a great way to get oriented to a city and to learn the history. Technically, they are not “free” as you tip the guide, but I think they are fantastic and would highly recommend joining onto one of them. The ones I did were thru the Orange Umbrella company, but there are other free tours operating in the Old Town. Warsaw is an interesting city because 85% of its buildings were destroyed in the second World War. Much of the Old City was rebuilt to maintain the look from that time period, but it’s weird touring the castle and the Old Town knowing that much of it isn’t actually old at all. 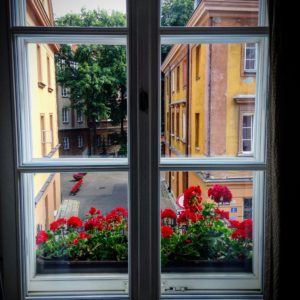 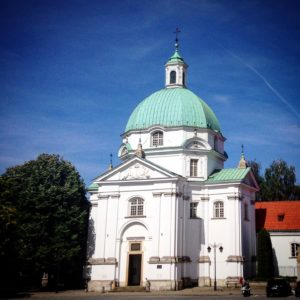 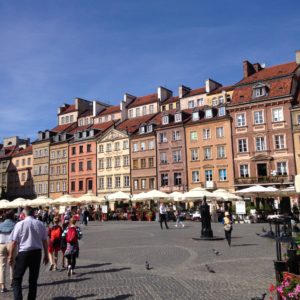 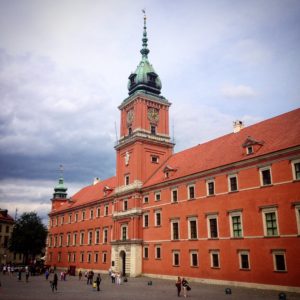 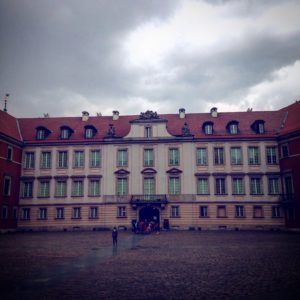 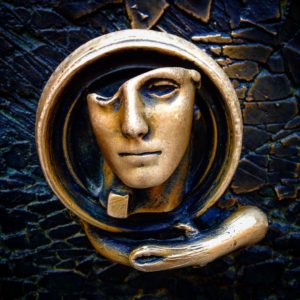 I spend part of a morning visiting the Neon Museum which houses neon signs from the cold war era. It’s really quite cool, but a little out of the way and it’s a very small venue. Nonetheless I was happy to have seen it. I also spent some time visiting the Block 10 museum which is within the Citadel and housed political prisoners. I got dropped off at this museum by a taxi driver and there was literally not another person in sight,  and the driver let me out and then drove away. As I walked towards the building I thought to myself how creepy it was and figured that it was closed. I ended up being wrong, but I was the only person in the museum. As I’ve described before I have a way over active imagination. Like I can get myself worked up pretty easily, so touring an old prison solo was not the best idea I’ve ever had. At one point I was walking down a dimly lit corridor with cells lining both sides and there was a gust of wind that blew in and ended up slamming one of the metal doors behind me shut. My heart quite nearly stopped, and then restarted at double its normal rate. It’s funny looking back at it the way nearly having a heart attack always is!! Also all the signs in this museum were in Polish which is less than helpful if you can’t read Polish, but there is a really well done art exhibit which is worth seeing and the museum itself is free. Just watch your back for door slamming ghosts. Another museum I would recommend is the Warsaw Uprising museum. I ended up going on a Sunday and it was free but also super super busy. There is a TON of information in this museum- it’s very well done but completely overwhelming at the amount of information displayed. It’s pretty easy to get information overloaded there. 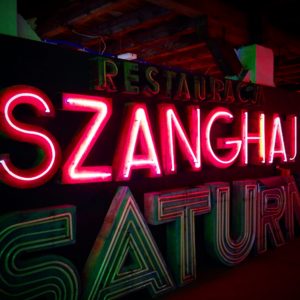 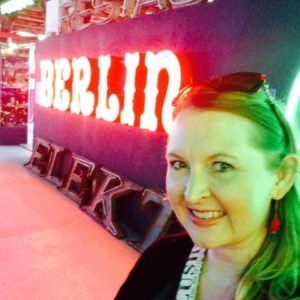 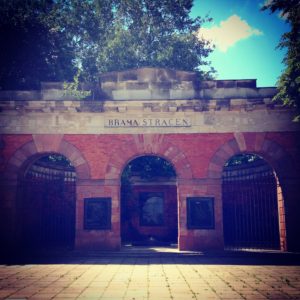 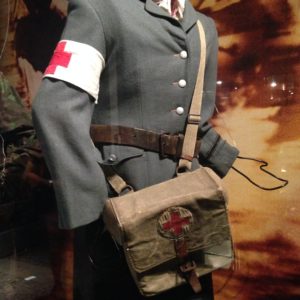 One morning I attempted to visit Lazienki Palace which is housed within the largest park in Warsaw. It’s built on a lake, and the views are stunning. Unfortunately, on the day I visited the Palace was closed for some type of government function with security and media. I was still able to get some spectacular shots of the Palace and the park, so all was not lost. Coincidentally, one of the reasons for my visiting the park and the Palace was that it was about a 6km stroll back to my hotel (these were my early days of Camino training). On my way back I stumbled upon a huge overpass with some very talented graffiti work. I’m a sucker for urban art- I’m not talking about the simple “tagging” of graffiti, but the stuff that’s urban and industrial and colourful, and was created at the hands of someone with a great deal of artistic talent. The graffiti covered every possible inch of reachable concrete and I was mesmerized and took at least a hundred pictures. Much to my great pleasure that walk back looped through part of an industrial area, again every surface was covered in urban art! 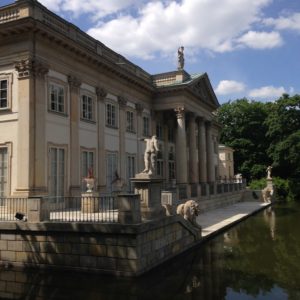 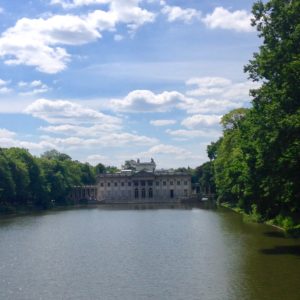 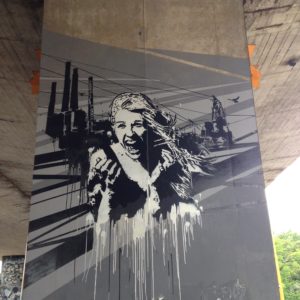 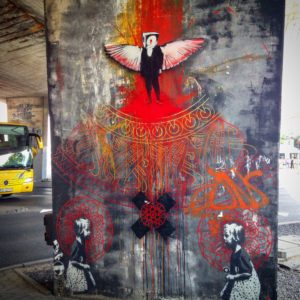 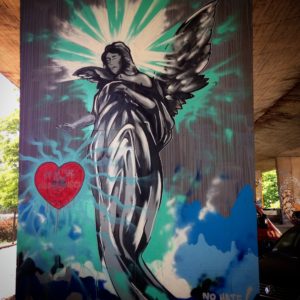 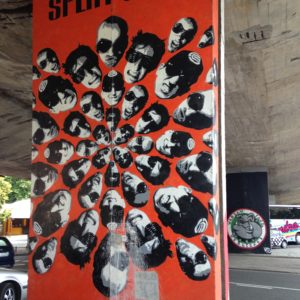 My last day I took a taxi 20min south of the city to visit Wilanow Palace which was left largely unscathed from WW2. The Palace was built in the early 1800s and it’s really a marvel to visit. The Palace is white with bright yellow accents and statues lining the roof. The inside of the Palace is decorated with artwork and furniture from that time. One section had tin pieces painted with portraits from the 17th century. The portraits were painted prior to someone dying for the grieving to see the dead and often they were painted in the persons traveling clothes as they believed that death was the ultimate journey to a new life. I quite like this custom. The Palace is surrounded by well manicured grounds that make a lovely stroll. 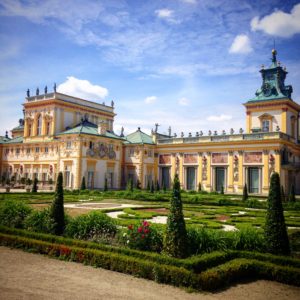 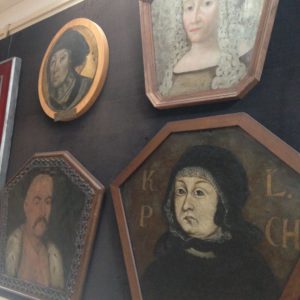 Poland has a very significant Jewish history and in fact  parts of Warsaw are quite literally built on the ruins of the Jewish ghetto. If you visit I would highly recommend that you do some sort of tour that speaks to this history. As previously mentioned I did a couple free walking tours with the Orange Umbrella company and they had one specifically about Jewish Warsaw. Reportedly, back in the 10th century the Kings from this area offered Jewish people the freedom of religion and protection at a time when they were being persecuted in Western Europe. In the early 16th century Warsaw became Christian and the Jewish residents moved outside the city walls. Aristocrats set up private towns and many Jewish residents lived there. In the 18th century Poland ceased to exist and it was split between Russia, Prussia (pre Germany) and Austria. It was then recreated after WW1. Prior to WW2 half the residents of Warsaw were Jewish. 6 million Poles died in WW2 and half of them were Jewish. In 1940 all Warsaw Jewish residents were moved into the Jewish Ghetto and 100,000 people were moved out of that area to make space. Eventually 500,000 people would reside there. Conditions were deplorable as one can image. There was massive over crowding and people were living off an estimated intake of 460 calories/day. 91,000 died that first year. In 1941 1 million Poles were killed by death squads. In 1942 the deportations to death camps started. International communities were petitioned to bomb the railways which likely would’ve ended the Holocaust but they didn’t. By 1942 there were just 300,000 people left in the Warsaw ghetto- mostly strong men used for labour. These men would go on to plot and take part in the Warsaw Ghetto Uprising of 1943. These men were able to hold off Nazi forces for nearly a month and is known as the largest Jewish revolt in the second World War. In 1944 the Warsaw uprising took place which led to the retreating Nazi forces basically destroying Warsaw which is why 85% of its buildings were rebuilt after the war. The Jewish Walking tour takes you to many of the memorials around the city, past the cemetery and points out the markers on the sidewalk that indicate the borders of the Jewish ghetto.

So that covers my time in Poland. I think Poland is largely overlooked as a European destination, but if Warsaw is any indication of what the rest of the country has to offer I’m quite certain I’ll be back to explore more!