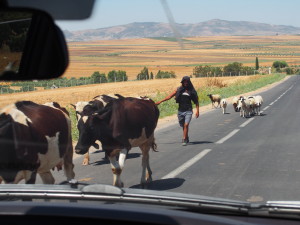 On route to Volubilis

I have come to learn that Roman ruins look like…..you guessed it…..Roman ruins the world over. Sites that I have visited in Syria look similar to sites I visited in Jordan while still similar to sites in Cyprus and also to sites in Morocco. Romans had their building styles down. Seriously. So on route to the Moroccan city of Chefchaouen we stopped off at the UNESCO site of Volubilis. Volubilis is located about 90min west of Fez. We hired a driver to take us to Chefchaouen and had decided to make a stop-off to see these Roman sites.

Volubilis is only partially excavated, and is in varying states of ruin, literally in the middle of an agriculture field surrounded by a small town. They are reportedly the best preserved site in Morocco which was why we were keen to see it. The area was developed in the 3rd century BC and expanded under Roman rule in the 1st century AD. It is estimated that the 40 hectare site housed some 20 000 people at its peak. In the 2nd and 3rd century the basilica, arch, and baths were added and the area was known for its fertile soil and subsequent olive groves. By the end of the 3rd century the site fell to local Berber tribes and the area was abandoned by the Romans. It would remain abandoned for another 700 years before becoming an Islamic settlement in the 8th century. By the 11th century it was abandoned again. In the mid-18th century the ruins were damaged in an earthquake.

We arrived at the site mid-morning, and as it was the first day of the Muslim holy month of Ramadan the site was empty. I don’t remember how much the entrance fee was but as with all tourists sites in Morocco it was very cheap compared to what you would pay anywhere else. There are guides available at the entrance but we decided to wander on our own. You will need at least 60-90 minutes to do it justice, and wear decent shoes as the paths are rocky. Also bring lots of water, sunscreen, and a hat if visiting in the summer months because there is like zero shade and you will be sweating your ass off.

Volubilis is known for its well preserved mosaics and the remains of the Capitol, Basilica and the Triumph Arch. The mosaics are roped off, but otherwise you can freely roam through the rest of the site. The Basilica has reconstructed columns where if you time your visit with stork nesting season you’ll be able to see the storks perched on the tops of the columns. I like the Triumph Arch the best personally. The mosaics were slightly confusing. In the House of the Acrobat there is one of a guy riding a horse (although it looks more like a donkey to me) backwards that was confusing. Also the guy looks naked. I feel like riding a horse backwards while naked is a recipe for disaster. According to my Lonely Planet it is meant to depict an athlete who received a trophy for dismounting his horse and then jumping back on while the horse was moving. Those crazy Romans!!! 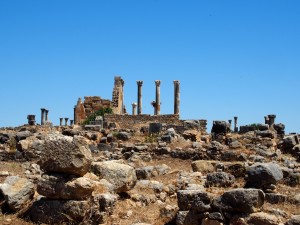 The view towards the Capital 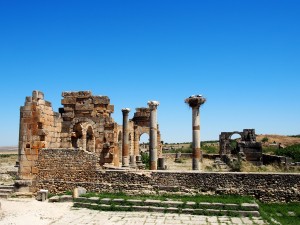 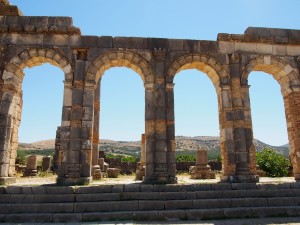 Archway of the Basilica 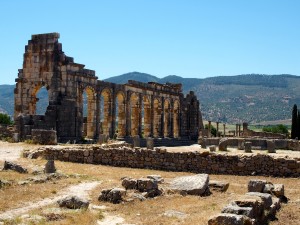 The view of the Basilica ruins 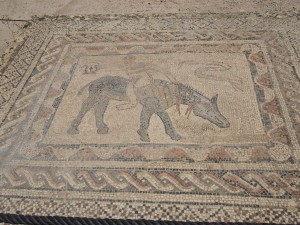 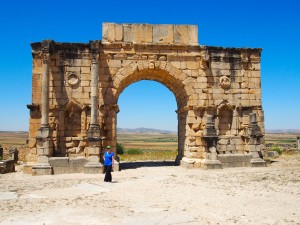 Me at the Triumph Arch

The main road from the Triumph Arch is called the Decumanus Maximus and is lined with the ruins of houses on either side. The House of Ephebus and the House of the Knight contain mosaics that are fairly well maintained, but the best preserved mosaics are found in the House of Venus. They are the Abduction of Hylas by the Nymphs, and Diana Bathing. The story behind the mosaic of Diana Bathing was that a hunter named Acteon saw Diana bathing and she punished him by turning him into a stag. Well played Diana, well played. 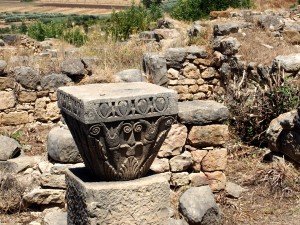 Very ornate ruins of a column 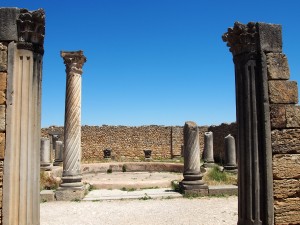 House of the Columns 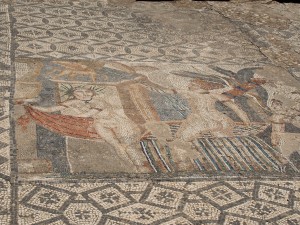 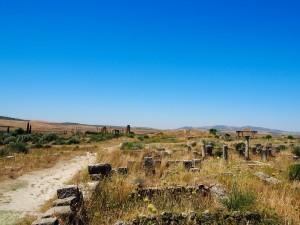 The ruins amongst the fields

If you find yourself in the northwestern part of Morocco you should make a stop at Volubilis. The green colour of the fields surrounding this archeological site make for great photos, and it’s not every day that you get to see a mosaic from the 2nd or 3rd century of a questionably naked guy riding a horse backwards. Trust me.