After stopping off at Volubilis we drove another 3 hrs to Chefchaouen a small city in the north of Morocco in the Rif mountains. Chefchaouen is famous for being the “Blue City” of Morocco. If you’ve ever drooled over photos of Morocco many of them were likely taken here. The city originates from the late 1400s. It grew in size as Jewish and Muslim refugees arrived from Granada, and remained relatively isolated until the 1920s when it was occupied by Spanish troops to form part of Spanish Morocco. Chefchaouen was reportedly painted blue back in the 1930’s by Jewish refugees who lived there. The city was then returned to Morocco when Morocco won independence in 1956.

The city is extremely photogenic, which makes it a prime tourist stop. It has a Spanish flare about it paying homage to the early inhabitants of the city, which only adds to its appeal. Our entire trip to Morocco centered around visiting Chefchaouen, and the city did not disappoint. We spent 2 relaxing nights here at Casa Perleta. If you go I think you should stay here. The staff were lovely, and it’s located near one of the main entrances to the Medina which means you won’t have to schlep your luggage very far. The only down side was that there was a megaphone from the mosque next door pointed right at our window- don’t let that deter you from staying here though, because as with most Muslim countries there’s always a mosque with a megaphone near by. 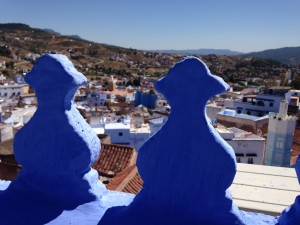 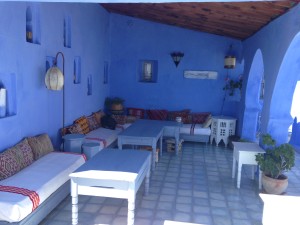 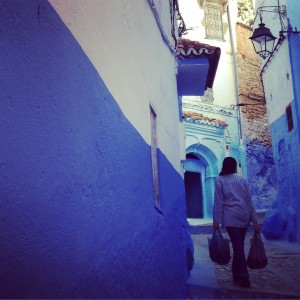 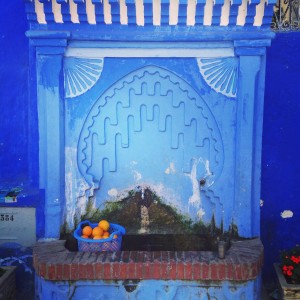 Two nights was enough time to explore Chefchaouen. Our main goal was to take as many photos of blue houses, doors, door knockers, and blue windows as we could. As I’ve already mentioned ever corner you turn looks like it should be  a postcard. When you get tired of taking photos (is that even possible?) there’s other things to do as well. There are restaurants and cafes to sit at with great views of the main square. The old men of Chefchaouen love to sit around and chit chat around the old square. And they are super cute to watch. Coincidentally people of this village often wear these cloak like garments that are a cross between a housecoat, and a muumuu with a pointed hood. Personally I thought everyone looked a bit like a magician, or like an older Harry Potter character except that most of these outfits were either white, tan, or yellow. 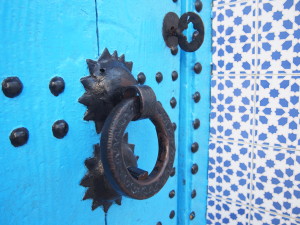 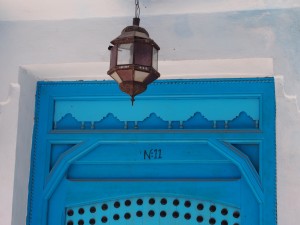 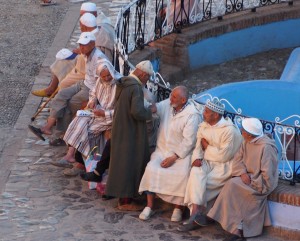 How cute are these guys?? 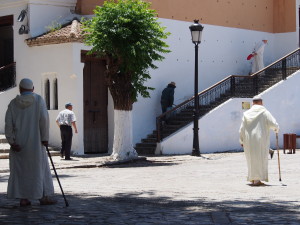 We spent some time at the Kasbah Museum which is housed in an old walled fortress from the early 18th century. None of the signs in the museum are in English (Spanish and French and likely Arabic if memory serves me)- but it’s still worth going because the gardens are beautiful, and the views from the tower are panoramic. Also if you’re a bit of a paparazzi like me they’re great for getting pictures of unsuspecting locals dressed as wizzards going about their day. I know I should feel a little bad about taking photos without permission but I’ve had my photo taken literally hundreds of times all over India and Bangladesh, and much of the Middle East. So fair’s fair right?! 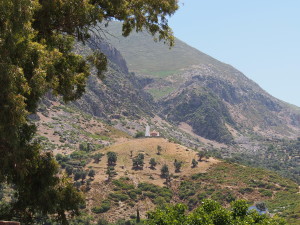 Spanish Mosque from the Kasbah 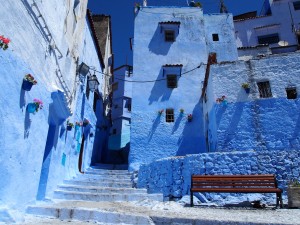 After you’ve finished taking panoramic shots and sneaky photos of the elderly villagers you should make the short hike to the Spanish Mosque. Don’t go mid-day as it’s far too hot in the summer months. We went in the early morning, but it would be spectacular at sunset. I also wouldn’t go alone as a woman, as the only other people we saw on the path were men, and one of them I inadvertently made eye contact with while he was peeing. To be fair, I didn’t realize he was peeing until we made eye contact, we shared a really weird moment. So anyways, the mosque overlooks the town on an opposite hill about 2km from the edge of the Medina once you’ve crossed the river. It took us about 30min to get to the top at a moderate pace with a few stop-offs for photos. There were some stray dogs along the way- one of them decided to be our guide and luckily also our guard as he scared off a rather aggressive dog we crossed paths with at the top. The mosque itself was built by the Spanish in the 1920’s when they occupied the city- it reportedly was never used by the local Muslims. The doors were locked when we visited. It’s well worth the walk up because the photos of the city with the different shades of blue against the opposite hill is impressive. 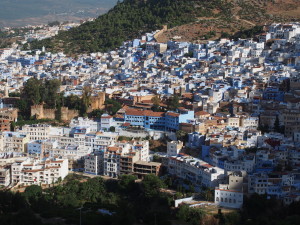 Views from the Spanish Mosque 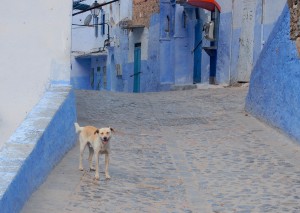 Our guide and guard dog. 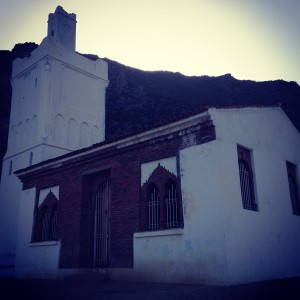 Spanish Mosque in the morning light 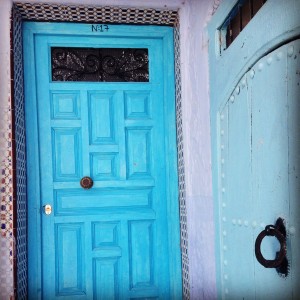 From here we had a driver take us 4hrs to Rabat where we caught the train back to Marrakesh for the better part of a week. Next in the Morocco series- the Moroccan hammam experience.