So one of the many fashion must-haves for women in Saudi Arabia is an abaya. You are required to wear one anytime you are out in public, or in my case when I’m off the hospital compound. Inside the hospital it isn’t required, and the other non-abaya places are in the Diplomatic Quarter or in western compounds. So naturally, if a girl has to cover she might as well look fashionable! 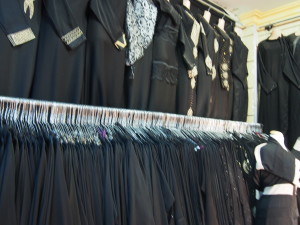 Abaya’s come in a variety of styles, but the most common colour for them by far is black. There is the pull over your head model that is useful when you don’t intend to take it off (as taking it off causes massive static electricity, and messes up your hair.) This is my go-to style when I’m going grocery shopping, running errands, or to the mall. Then there are the zipper or button front models for when you want to class it up a bit. The last time I lived here I bought this abaya that basically made me feel like a super hero. It had this sheer fabric bit in the back that looped out and attached to the end of my sleeves so I felt like an exotic princess/superhero. In theory this sounds amazing right? In actual fact the sleeves made eating very, very difficult, and they would get caught on everything making me resemble a marionette puppet because I couldn’t reach for things properly. Not cool abaya. Not cool. 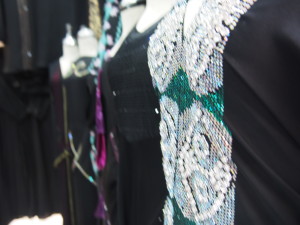 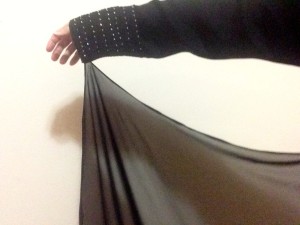 A few months ago I bought a very trendy abaya that was made in Dubai. It had a sheer lace top with a lining, and the base of it was a piece of beige fabric. So fashionable. Until I ripped a huge whole down the side of it in a taxi. Then it was a huge waste of money. So now I was sans a fashionable abaya. Earlier this week I ventured out to Deira Souk in hunt of a new abaya with my kiwi sidekick. Deira Souk has a bunch of abaya stores, and you can pick one up for anywhere between 80-150riyals. The day we went we were trailed by an older Saudi lady and her daughter who were very open about giving their fashion advice about which abaya we should buy. They were very vocal about their distaste for anything remotely flattering, and were giving us thumbs up for anything that fit us with the fashion style of being covered in a garbage bag. We thanked them for their “help” and quickly ditched them. In the third abaya shop that we went to I casually asked if they had anything with pockets. Abaya’s pretty much never have a pocket option, and its a pain in the butt as you have to carry a purse or risk misplacing your phone or keys as you have nowhere to put them. This my friends, is where I hit the abaya jackpot. Because, “yes mamm we have pockets” and out of the rack was the greatest abaya that has ever existed. It had a zipper front with 2 front pockets, and gold piping down the front, the sides, and around the pockets. I couldn’t have designed a better abaya. And then the man said something that almost made my head explode “mamm, we also have blue.” Blue. Midnight blue to be exact. With gold piping. If this abaya were a jackets and pants it would be the type of sporty outfit you see Indian men wearing. Part tracksuit, part workout gear, part abaya. Trendy, yet casual, yet retro. I had know idea I could love an abaya this much. So I am now the excited owner of a midnight blue abaya with gold piping. And pockets. Sir, you had me at pockets. So naturally I bartered a good price. And then asked the men where they were from. And they were from Bangladesh, one of my favourite countries I’ve visited. So I practiced the one Bengali word I know with them, and they were very impressed. 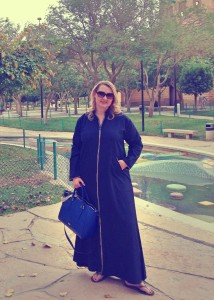 A Lesson In Kindness