A Lesson In Kindness

For me, travel is a never ending lesson in kindness. I truly believe that most people are good, and this belief is never more apparent then when I’m traveling. From India, to Bangladesh, to the corners of the Middle East, for the most part I’ve met kind, kind people.

Back in February I took a trip to Cyprus. My kiwi travel mate and I rented a car in the southern part of Cyprus where we toured around for the better part of a week. Our last few days in Cyprus were spend in the border city of Nicosia where the Green Line dissects the city into the southern Greek part and what they refer to as the “Turkish occupied” area to the North. We had been warned many times by people on the southern side that the people of the north couldn’t be trusted. That they were dishonest. That it was unsafe. And that we would be scammed. Naturally, I wanted to check out this place, full well knowing that this was likely very untrue.

We wanted to explore the Turkish side, but it was a bit of a paper-work nightmare to drive our rental car across. Even with the proper paperwork the end result was that we would likely still void the rental agreement we had with the car rental place in the south. So that seemed like not a great option. We inquired at our hotel in the southern part of Nicosia about booking a taxi for the day to take us around. At first the reception guy referenced the many reasons why we shouldn’t go to the north. They are bad, they treat their women bad, they will treat you bad. We then informed him where we live. He replied that we would find the north especially shocking then. He was dead serious. We laughed till our eyes watered. He then quoted us 350euros to book a taxi for the day. Again, I thought he was joking and started to laugh. Turns out he was not. So we told him we would walk across the border and negotiate a taxi ourselves. He was horrified at our blatant disregard for his safety warnings.

So cross the border we did. And we found a taxi stand and tried to negotiate with a couple drivers, but the lowest price we could get them down to was 120euros which still seemed rather steep. So, we wandered the market and found a small shawarma place called the Orange Cafe and Restaurant. We sat down and ordered a bite to eat and a couple beers to discuss our options. It then dawned on me that maybe we could just rent a car in the north for the day. So I asked the very nice Pakistani guy who was our server if there were any car rental places close by. He replied no, but then uttered the words “maybe my boss knows.” And off he went to get his boss.

Samie, as we would soon learn was the boss’s name strolled over a couple minutes later. He was in his late 40’s, wearing blue jeans, a leather jacket, and a hat with a maple leaf on the front. In Canada we call these hats a touque and the fact that his had a maple leaf on it made me like him immediately. So we told him our sad story of how we wanted to tour the north, but didn’t want to pay very much to do it. As it turned out Samie also owned a taxi company and told us he could get us a driver for the day for 100euros. Again we said it was too much, so then Samie said he had a BMW that he would lend us for 50euros the following day. He said he also had a Hummer, but that the it was too expensive in gas. Now granted, it did sound a little sketchy, but I’m one for seeing how a situation plays out. And 50euros to drive ourselves was exactly what we wanted. So we made arrangements to meet at 9am the following morning. 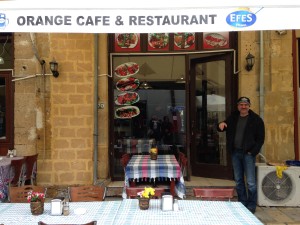 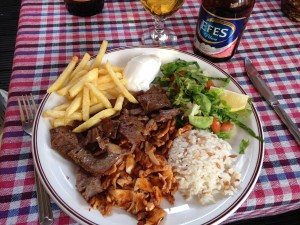 So the following morning we head back across the border to the north. It’s pouring rain, and by the time we arrive at the Orange Cafe we are drenched. Samie is there, and his “brother” is there, and no one really speaks great English. So we are invited to sit down for tea, and Samie brings us an olive loaf that his mother made. And it’s delicious. Samie makes a phone call that we eventually make out has to do with insurance for the car, and then a guy arrives with papers, and then things got a little confusing. Samie hands my kiwi mate the keys and we walk over to the BMW but the guy who delivered the papers is still there. So we’re thinking maybe we’ve totally misunderstood and this guy is taking us for the day? So Samie says basically “bring the car back whenever” and walks away. Now I’m in the backseat and my Kiwi friend is in the passenger seat, and this paper-delivery guy is now driving us through the winding narrow streets of Northern Nicosia. After a couple minutes he stops, gets out, and gets into another vehicle, and signals for us to follow him out of the old city walls.

And then just like that we’re on our own in a strangers car (that we’ve yet to pay the 50euros) and we’re driving further into the north, and we’re laughing at the absurdness of it all. That Samie trusted us enough upon initial impression to hand over the keys to his car. At the complete kindness and trust of a stranger. So we spent the day touring and getting lost in the north of Cyprus as I’ve previously told you. We got hopelessly lost trying to get back to the cafe. The winding narrow streets of the walled section of north Nicosia is disorienting and confusing. By complete fluke we ended up pulling over about to ask for directions and who was standing across the street? The original guy who delivered the insurance papers. So he jumped in and drove us back to the Orange Cafe and to the car’s rightful owner, Samie. We ordered some beer and some food and sat with Samie and his “brother” for a couple hours discussing politics and life in the north in broken English.

The following day (our last day in Cyprus) we stopped back at the Orange Cafe. By now we felt like they were our good friends. We had some apple tea, and said our goodbyes. So what did Samie teach me? He taught me that it’s ok to take a chance on a stranger, that people can do something kind, just for the reason of being kind and helpful. He taught me that each of us should make more of an effort to help tourists in our own country. Because even though I have had so many kind interactions with strangers while traveling,  I could make more of an effort when I’m on my home soil. Don’t get me wrong, I’m not saying that we should all immediately hand over our car keys to the next tourist you see, but that it’s ok to go out of your way to help a stranger. That kindness towards a stranger benefits not just the giver but also the receiver. Try it and I guarantee your heart will feel a little lighter.

I think I’m going to make a Lesson in Kindness a regular part of my blog. I’ve got so many wonderful stories of chance encounters with kind strangers that have been so humbling, I would love to share more of them. Those chance encounters where you walk away with the feeling that the world is a good place, and that compassion and kindness are the keys to the betterment of humanity. For as the Dalai Lama once said “Love and compassion are necessities, not luxuries. Without them humanity cannot survive.”
I agree wholeheartedly.