Over the past 2 years I’ve been to Dubai several times, but hadn’t had the chance to make my way to Abu Dhabi. The United Arab Emirates is a conglomerate of seven emirates- each emirate is governed by a monarch and together they form a federal council. Some of the smaller emirates are less well known and I’m guessing apart from my Middle Eastern readers many of you may not have heard of Ajman or Sharjah. But I’m pretty certain you know quite a bit about Dubai and Abu Dhabi. I’ve blogged about Dubai before- it’s a great weekend break from Saudi and there’s tons of things to do and see. Many of those things are over the top tourists things like indoor skiing, swimming with dolphins, and tend to have a luxury type travel flare to them. Abu Dhabi by contrast is Dubai’s classier more cultured and sophisticated sister. The economy of the UAE is made up of 2 things- oil and tourism. Dubai is the 5th most popular tourist destination in the world with an estimated 15 million overnight tourists expected in 2016.

Back in August I had a weeks vacation and split it between Dubai and a night in Kuwait. I had originally wanted to just stay in Abu Dhabi but the flight times didn’t work great with meeting up with my friend in Kuwait so I opted to just take a day trip to Abu Dhabi instead. There are so many tour options to get from Dubai to Abu Dhabi depending on what you are wanting to see. For me, the main priority of visiting Abu Dhabi was to visit the Sheikh Zayed Mosque and photograph it. I’d seen so many pictures of this iconic mosque and long ago I fell in love with Islamic architecture so this was really my sole purpose for going. I joined a large day bus tour of which I’m not normally a fan, but this was the cheapest and easiest option.

It takes about 90 minutes by bus to get from Dubai to Abu Dhabi. On route the tour guide pointed out the many many new buildings and tourists attractions being built in the emirates. They do things big here- like record breaking big. So most of the things that are being built are the largest such and such, and tallest such and such, and the first ever such and such of the Middle East. As you can imagine much of the countryside in between Dubai and Abi Dhabi is made up of sandy desert, although it does get significantly greener towards Abu Dhabi. Our first stop on the tour was a stop at the very fancy Viceroy hotel on Yas Island that overlooks the Yas Marina circuit of the Formula 1 races. The hotel as you can imagine is very opulent and it would probably cost me a months salary to spend a night there. The hotel overlooks the race track and we stopped for a cold drink and some obligatory photos. The tour then visited the Abu Dhabi waterfront where  we stopped for some photos along the corniche of the Emirates Palace another fancy 5 star hotel. Then there was a trip to a nearby mall for lunch (can you see why I’m never especially jazzed about big group tours?) 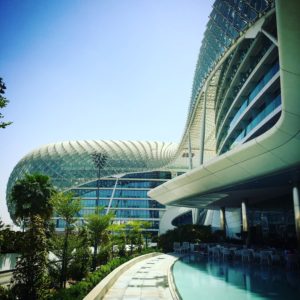 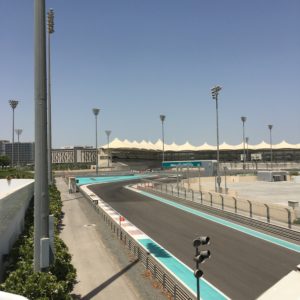 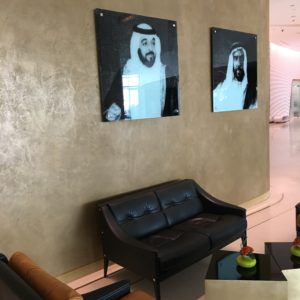 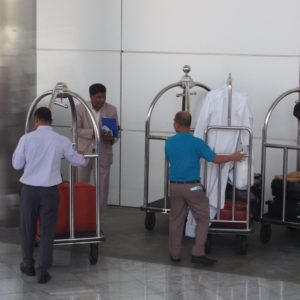 Then, after lunch we headed for the Sheikh Zayed Mosque. Finally!! Now it should be said that even though everyone on the tour bus had been instructed (and warned multiple times) about the dress code to visit the mosque, many of my fellow tourists didn’t get the message. There seemed to be mass confusion about why shorts and uncovered shoulders weren’t allowed. Why they wouldn’t be allowed in with a sexy tight fitting dresses. It was mildly entertaining to watch- really equal parts entertaining and annoying since the tour guide had already instructed these ladies that they would need to purchase abayas at the mall if they wanted to visit the mosque. So after we all off loaded the tour bus and started walking towards the entrance a security guard came over and started picking those deemed inappropriately dressed out of the group. Luckily, it is possible to also buy an abaya from the gift shop on site. Being a professional abaya wearer I had packed mine from Saudi just for this occasion. Per the mosque website it states that all women MUST wear an abaya, but then also that lose fitting clothes and ankle length skirts are ok. Clothing must not be transparent. Men cannot wear shorts. I do recall that there were women there not wearing abayas, but if you have one I’d err on the side of just bringing it. Women must cover their hair. 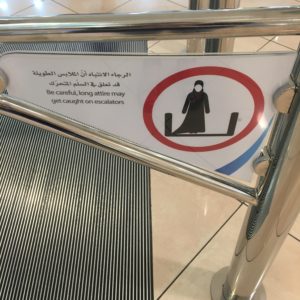 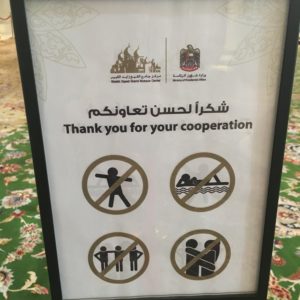 The Sheikh Zayed Mosque was built in the late 1990s and completed in 2007. It was built by the president for whom the mosque is named after, sadly he passed away in 2004. It’s the largest mosque in the UAE and can hold a reported 40,000 worshipers at a time. The outer courtyard of the mosque is accented with manicured gardens and shallow reflective pools. I didn’t have a chance to see the mosque at night, but from pictures I have seen it is beautifully lit. As you can imagine the mosque is enormous- the whole area is the size of five football fields. It’s built out of white marble and some of that marble is inlaid with pearl and other semi precious stones into colourful flower patterns that reminded me of the Taj Mahal. There are 4 minarets, 82 domes of varying size, 96 columns in the prayer hall with one the worlds largest carpets weighing some 35 tons. We spend about an hour visiting the mosque. Seeing as it was August when I visited it was very hot and humid and the outside courtyard offers very little shade. You then wind your way thru the outer walkway accented by arches into the great room. It’s all very aesthetically pleasing. Everything flows and is very calming and symmetrical as  Islamic architecture always is. It’s very cool if you have the chance to be there as the call to prayer goes off. All around are tourists taking selfies. As you walk into the main room shoes are removed and you can feel the cold marble underfoot until you reach the carpet inside. The domes allow light to flow into the room and it’s adorned with decorative chandeliers. I must say that this mosque lived up to my expectations! 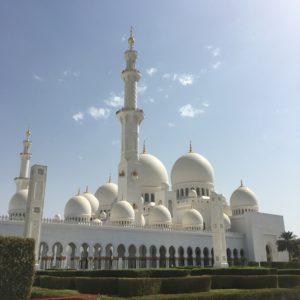 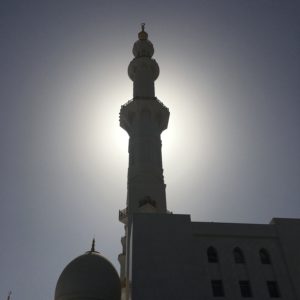 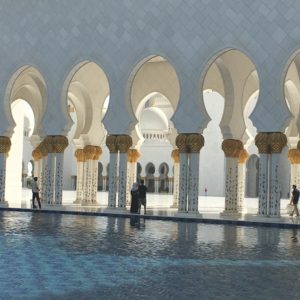 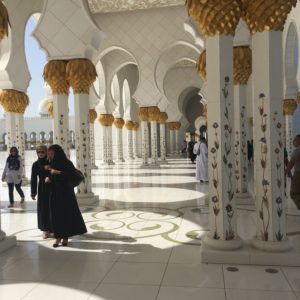 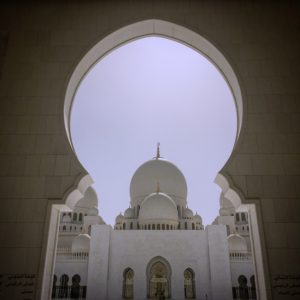 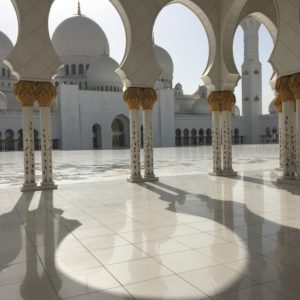 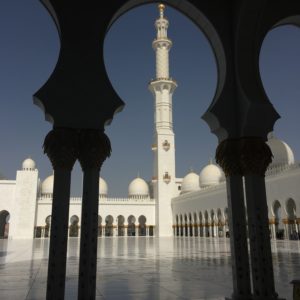 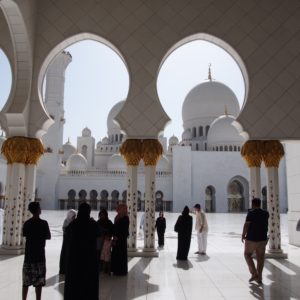 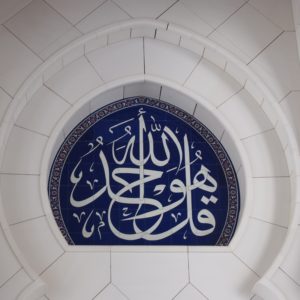 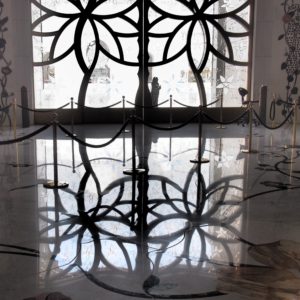 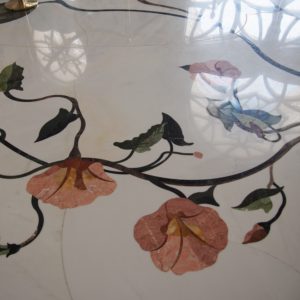 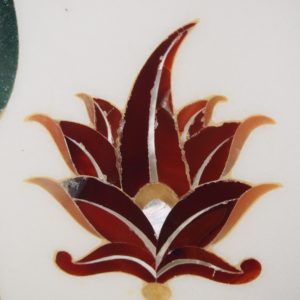 From here we started our drive back to Dubai. If you’re in Dubai I would highly recommend making a trip to Abu Dhabi. Seeing the Sheikh Zayed mosque is well worth it!