As I’ve previously posted, Dubai is luxury at its finest. A place where the police drive lamborghinis and falcons get to fly first class. Neither of those things is untrue. Trust me. So, back in February I spent a weekend in Dubai. Several years ago I was on a single girls cruise to the Bahamas and the boat docked at the Atlantis resort for the day. I remember thinking I want to come back here some time. The beach was fantastic, the aquarium was amazing, and onto my bucket list it went.

Flash forward a couple years and I was living in Saudi (the first time.) I found out that there was also an Atlantis resort in Dubai and was like yep. I’m going. And then the UAE and Canada had a tiff something to do with international flights and Canadians had to pay like $250 to get a visa. And I was like Hell’s no. So alas it never happened.

So in February my kiwi sidekick and I splurged to stay one night at the Atlantis resort. It’s not cheap, but if you book thru their website and are a GCC resident (Gulf Cooperative Council) which if you live in Saudi and have an Igama you are, you get a 10% discount, and admission for 2 to the water park and to the aquarium. Nether of those things are cheap on their own, so it’s pretty easy to convince yourself that you’re actually saving money by staying there (even though you really aren’t.) But it worked for me. Trying to be semi budget conscious we opted to only stay one night and stay somewhere else cheap for the other 2 nights. In theory this sounds great, but I’ve often found that if you’re splurging to stay somewhere fancy for 1 night you should really just do yourself a favor and book for 2 nights. With one night you hardly have enough time to relax, and likely won’t be able to use all the facilities you want to. We sure couldn’t. 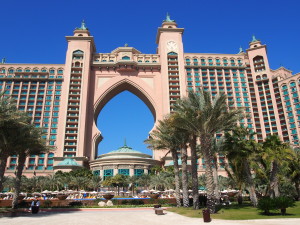 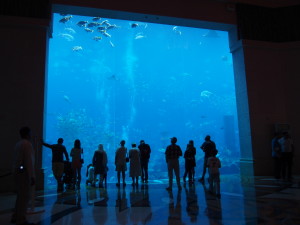 As you can imagine the Atlantis is fancy. We went to the water park which has a lovely lazy river that you can float around in. Since it was February the water felt cool, and it was cold late in the afternoon in the shade. There are a bunch of water slides, all of which I found terrifying. There’s something about flying thru a pitch black tube at high speeds that has me screaming like a teenager and demanding to get off. My kiwi sidekick was brave enough to go on the “Leap of Faith”. That’s the one that drops you pretty much straight down and you go thru the shark tank at high speed. Shark tank. No thanks. If you stay at the Atlantis I would recommend eating at the Seafire restaurant. The steak and the sides were amazing, and they have a really good wine selection. We had a California Zinfandel that made me insanely homesick. 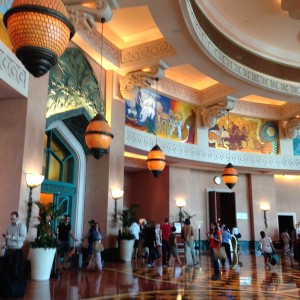 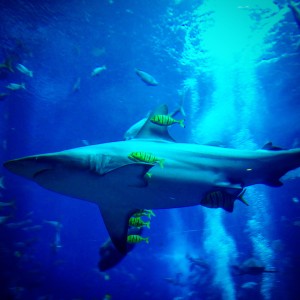 We went to Friday bunch at Feast. I’m a big fan of boozy breakfast, but this time I paced myself and was a little bit more classy than the last time we went when I ended up passed out by 5pm and with the hangover from hell later that evening. I guess you might say I’m maturing?!

We hit up Irish Village which is always a good time. Especially on the weekend. We took in a VIP movie. We got VIP tickets to go to the top of the Burj Khalifa. Basically it means you go in a special group (of other VIPs) and get to use a special elevator and make stops on the 125th and the 148th floor. There you are greeted with fresh juices and teeny tiny macaroons and other bite sized desserts. You can stay as long as you want. We timed our visit with sunset. FUNFACT: occasionally the Burj opens for sunrise viewings. That would be pretty cool if you don’t mind getting up at 5:30am on your vacation. The views from the Burj Khalifa towards the Atlantis and the Burj al Arab are spectacular, but weren’t very clear the day we were there as there always tends to be a lot of dust in the air. Still though, it is the tallest building in the world, so really you should go up it if you have the chance. 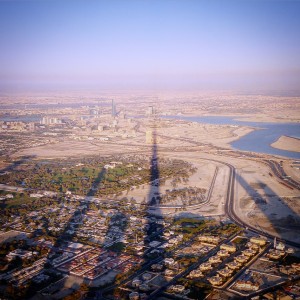 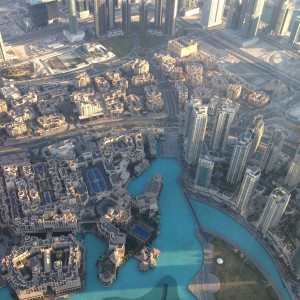 So here’s my top 5 list of things you should do in Dubai if you have money burning a hole in your pocket, or you fancy living the high life for the weekend:

1. Stay somewhere swanky. Dubai has a TON of 5 star hotels. I would say YOLO (you only live once) so book into the Atlantis.

2.  Book high tea at the Burj al Arab. And be sure to get there early so you get a window seat to watch the sunset. It’s pretty lovely.

3. You can’t go to Dubai without experiencing Friday brunch. And you best make it boozy in my opinion. They’re not cheap, but the food is phenomenal and that might be the only time you allow yourself to drink bottles of Moët champers (champagne people.)

4. Make a trip to the 148th floor of the Burj Khalifa. Ponder your existence. Take as many selfies with the Dubai skyline as your backdrop as is humanely possible.

5. See a movie as the VIP I know you are. You’ll get a private attendant to get you whatever you need. A lazy boy reclining chair. A pillow and a blanket. Heaven. Especially after a night out on the town. Just don’t fall asleep and miss the entire movie!!

Have you been to Dubai? What’s the most outrageous thing you did while there??