So this past weekend a Canuck, a Kiwi, a Yank, and a Czech went on a Saudi style adventure. One of the things I regretted the most after I left Saudi the last time was that I didn’t take advantage of traveling much within the country…..mostly beacuse I couldn’t wait to get out. One of the places I regretted not getting to see was to Madain Saleh, which is coined the Petra of Saudi Arabia. Since a person can’t just get a tourist visa to come and tour Saudi Arabia this was seriously at the top of my Saudi Part 2 bucket list. We organized the tour through the social club at my hospital and a kind man there booked our airline tickets, hotel, tour guide and security escort. Yes. You read that right. We had a security escort. I’ll fill you in on that later.

If you know me at all you’ll know 2 things about me. The first is that I love to travel. I would remortgage a home (if I were responsible enough to own a home) to travel. The second thing is that I’m terrified of flying. As in my stomach is upset the entire day before I fly and the only way I fly is highly medicated. And even medicated I might cry. And if you’re unlucky enough to end up sitting next to me you’ll likely have to hold my hand. And tell me stories to distract me from the crazy voices in my head. I don’t feel like I’m going to die on a daily basis, but get me on a plane and I’m convinced this is where it all ends. What I do love about flying is the security. Security gives me the false sense that everything is going to be ok. So when I’m running thru the likely scenarios of why the flight I’m on might crash I can cross bomb and terrorist off the list and focus more on the fact that that noise right there means we just lost engine one or that the pilot might fall asleep. Anyways, we arrive at Riyadh airport for our domestic flight and head over to security. Nobody asks to see my boarding card. No one asks to see my ID. Huh?. So we go through security, which involves going into a Ladies-only room where I get complimented about my blond locks and we get the security wand (you know the ones they use at concerts) and I’m starting to stress. Because I really want there to be one of those security machines where you plant your feet on the ground and the thing moves around you and if a person had breast implants you’d be able to see them so the crazy voice in my head knew that no one was getting on this plane with anything they shouldn’t. (Don’t get me wrong I think breast implants should be allowed on planes, but if you can see implants you know there’s no sneaking anything dangerous on.) But that didn’t happen. Because I never pulled my passport out. And there was no liquid limit enforced which I also find strangely comforting. So I medicated and we boarded the plane. And I didn’t die!! 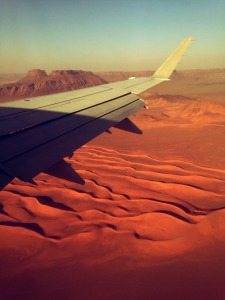 Al Ula is a stressful 70 minute flight from Riyadh. Stressful for me- likely no biggie for you. Al Ula is in the northwest of Saudi Arabia about 400km from Jordan. Our guide told us that the population was around 70 000 and that they get around 100 000 tourist a year. The city is surrounded by rock formations that reminded me a lot of Jordan and was kinda like Sedona Arizona on a smaller scale. Every direction you looked there was some interesting mountain or rock to point out. Our guide Fayiz met us at the airport and we went back to the hotel. There are only 2 hotels in Al Ula and I was told that only one of them is suitable for western tourists so we stayed at Al-Ula ARAC Resort. It was a perfectly fine middle of the road hotel. Don’t expect luxury, but it was fine for what we needed it for. After a bit of a rest Fayiz picked us up in his slightly beat-up Chevy Grand Marquis. He then took us on a bit of a tour of Al Ula as the sun was setting. We visited a local “path” where women and children go to walk and we wandered there for a while and got chatted up by some local girls who shared their Arabic coffee and sweets in exchange for having their pictures taken with us. We then went back to the hotel for an enormous buffet dinner and retreated to our patio for non-alcoholic beers and a game of Cards Against Humanity. If you don’t know what this game is you should buy it immediately. Unless you don’t have a sense of humour in which case you will hate it and might also hate this blog. 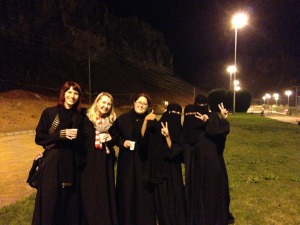 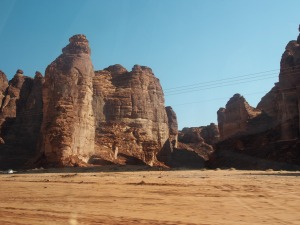 The following day 4 other people joined our tour- oddly enough they ended up being contractors who worked at our hospital in Riyadh. So our car, their car, and our 17 year old Saudi police man’s car (our security escort) drove to this amazing overlook with views of Al Ula and the entire valley. Unfortunately there was a lot of smoke in the valley so the views weren’t super clear, but it was still really lovely.  From here we went for a hike to see a rock that looked like a dog. If you haven’t been hiking in an abaya I would highly, highly recommend it. Because climbing over rock isn’t dangerous enough until you do it in a full length mu-mu. I’m clumsy enough as it is without having to worry about my abaya trying to break my ankle. At the end of the short hike there was……you guessed it…..a rock that looked vaguely like a dog. So we took our photos on it. We then visited the old town. Which is partially in the state of being restored and partly in the state of complete ruin. As with most places in Saudi there is garbage tossed everywhere. Here was no exception. There is a castle overlooking the old town smartly named Al Ula Castle with great views. Its a great location for #selfies FYI. We then checked out elephant rock which…….you guessed it……is a rock that looks like an elephant. Well, vaguely like an elephant from the back side and quite a bit like an elephant from the front. Then we headed back into town and visited the Friday vegetable market. 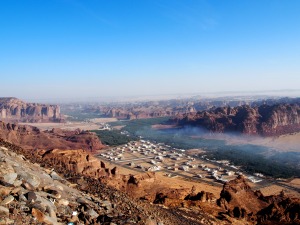 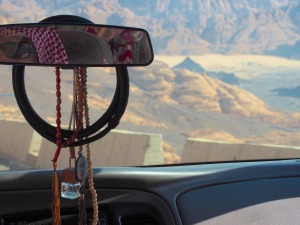 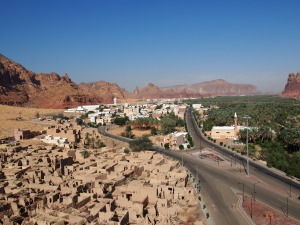 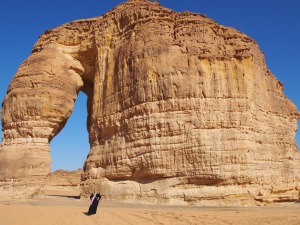 By this point in the day it was siesta time (and Friday prayer time for our guide) so we had buffet lunch at the hotel which was super yum and then had kitty-cat naps. Then we visited a tomb site dating from the Dedanite Kingdom. These tombs were built into the side of a huge rock. We happened to arrive just as the afternoon prayer was starting so it was a really cool experience hearing the call to prayer as we were walking amongst the tombs. Our guide Fayiz took us to visit his brother’s farm where he keeps camels and grows oranges and lemons. We took turns driving an ATV around the farm at sunset. It was a pretty great day. Next week I’ll blog about our security envoy and Saudi’s version of Petra……Madain Saleh. 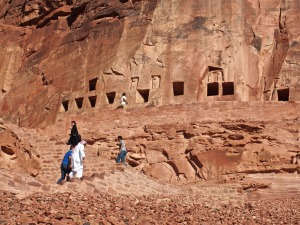 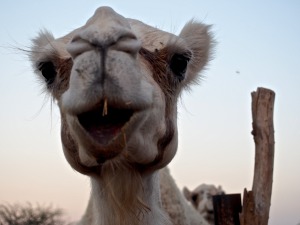