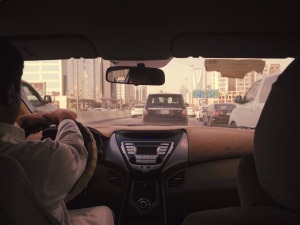 Having now visited many third world countries including India, Bangladesh, Indonesia, and Guatemala to name a few; I can confidently say that drivers in Saudi are in the running for the worst.  Driving rules and laws are viewed as mere suggestions to be followed, and then only if one wants to. And really, who would want to given all the flashy cars and SUV’s that are driven on Saudi streets??

The last time I was here I hardly ever wore a seat belt (don’t worry mom I ALWAYS wear one now- that is assuming the car I’m in has seat belts.) Previously I think I thought I was invincible, but this time I’ve heard too many horror stories and seen the remnants  of some very serious accidents alongside the freeway. Ex-pats in Saudi are always saying its not a matter of “if” you’ll be in an accident, but when. Luckily for me I’m hoping I’ve already gotten the accident karma out of my system, because the last time I was here I was involved in a little fender-bender. I was in a cab with 2 other girls and the taxi driver was very busy perving at us in the rear view mirror and he plowed thru the security barrier outside our compound angering the security guards and losing his rooftop taxi sign in the process. We were unscathed, and he was about 50 shades of red getting a strip torn off him by the guards.

I’ve done a little research about how serious driving fatalities are in the Kingdom of Saudi Arabia. Here in the capital of Riyadh it estimated that 9 people die daily with almost 20 people dying in traffic fatalities throughout the entire country per day. So how does this stack up to traffic fatality rates around the world? The World Health Organization has tables that track road fatality rates and the world average of traffic fatalities per 100 000 people is 18 (please note these stats are a couple years old). Just to give you an idea, in Saudi Arabia its 24.8, Canada 6, USA 11.6 and India 19.9. Several countries did have higher road fatality rates than Saudi Arabia and included Iran, Iraq, Thailand, Venezuela, and several African countries. It’s interesting to note that these statistics don’t separate out road fatalities into pedestrians, bicyclists, motorcyclists, or vehicles. Here in Saudi Arabia there are very few pedestrians, bicyclists or motorcycles as compared to say Thailand for example. It’s also very interesting to note that here in Saudi Arabia where its illegal for women to drive these stats represent only male drivers as compared to other countries whose statistics would include both male and female drivers.

So really how bad is driving here? I have witnessed cars driving the wrong way down the freeway or off-ramps on many occasions. It is very common for a vehicle in the outer right lane to make a left hand turn and most times they won’t even signal their intention. I once saw a covered truck with several workers in the back set off firecrackers under the canopy while driving 100km/hr on the freeway, because hey, this seems like a super smart thing to do. Children are often unrestrained in the car and often hanging out the window. Car seats are not used. When I asked at work about what type of check off we did when discharging new born babies in car seats I was laughed at like it was the funniest joke ever. The reply was “honey, nobody uses car seats here.” Tail gating is frequent. So is being stalked by a car load of pervy men. I’m not making this up. Most of the vehicles we are driven around in have tinted windows making it difficult to see who’s inside. Sometimes if we are going out in a group one of us ladies has to sit up front. This is where the real craziness begins. Cars full of young men will drive very close alongside, block other traffic, follow you, hold up signs with their phone numbers on it. I always make sure to call these men back and critique their driving skills. Just kidding!! Its amazing home many times you can be quite certain you’re going to be in an accident just being driven across the city.

Saudi Arabia is the only country in the world where it is illegal for women to drive. In recent years there has been media coverage and driving protests across the country to shed light on the issue and move towards allowing women to drive. Earlier this month there was talk of an advisory council to the King recommending lifting the restrictions and allowing women the right to drive. With this recommendation however came stipulations such as the woman must be over 30, wear no make-up, and be allowed to drive in daytime hours only. I guess you have to start somewhere. While I don’t dispute that women’s rights are a major issue throughout the Middle East, even if I was legally able to drive here I still wouldn’t. From what I witness on a daily basis I know my reflexes are not up to speed for Saudi roads. Unless it involves driving over sand dunes you couldn’t pay me enough to get me to drive on the streets of Riyadh!! On one of my next trips out I intend on taking some video footage to show Saudi driving skills at their finest. Since I don’t have any video to show you I’ll instead leave you with some picture of top-notch parking instead! 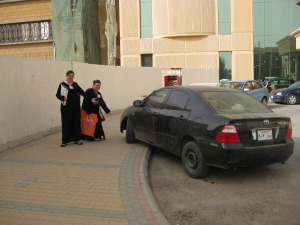 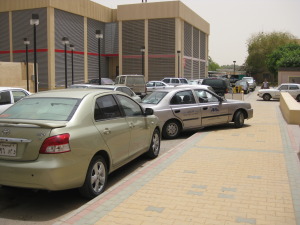