So as my time in Saudi is coming to an end I’m trying to check things off my Saudi Arabia bucket list. Some of these things are historical or cultural things, but a large percentage of them fall under the fun/jackassery category, of which I am very fond. Earlier this week I had big plans for myself and 3 friends. The outside temperature was a melting 45C/115F so I thought it was a good idea to have a little childhood fun. Ice skating Saudi style anyone? Yep, you read that right…..we went ice skating. I had read an old blog post that there was ice skating here in Riyadh for women. As is often the case here a lot of activities are for children or men only. Several of the malls here have ice skating rinks, but I’d yet to see one that allowed women. After some internet research which turned up a more recent blog post from 2 years ago it seemed like Royal Mall in Olaya might have an ice skating rink for ladies. So off we set out. There was no information online about opening hours or costs. We arrived at the mall at 4pm just after prayer had ended. Go to the second floor of the mall and then to the back arcade section where there is a fairly large ice rink. Don’t kidd yourself ladies…..that’s not the one we can use. Go up another set of stairs and you’ll feel the temperature drop so you’ll be pretty sure you’re on the right track. Go to the left and look for the signs.

Here’s where things get a little comical. The entrance is dark and I actually felt like I was going into a night club. So you walk thru the door and end up in the room where the fairly small skating rink is and now it really looks like a club. The lights are dimly lit. The place where you pay and get your skates resembles a bar. Sadly, there was no music which was a bit of a bummer. I’m not sure what the opening hours are because the ladies didn’t speak any English, but I can say that I was there at 4pm on a Sunday and they were open. Its 21 riyals for 30min and 41 riyals for an hour. The rink is small and the ice is kinda crap so I would say 30 min is fine. Growing up in Canada we would skate on one of the frozen rivers in Calgary. I was never a great skater, but could get around. The ice here is super dry (shocking) and so your skates don’t really get any grip. Ice skating is normally slippery, but this was to a whole other degree. Luckily, you can skate around in circles while holding onto the railing the entire way! Anyways, they have skates in different sizes- more like roller blades than the traditional lace up skates. Heads up- the skates stink. Like the person you know with the worst foot odor multiplied by 10 kinda stink. Still though it was fun way to spend part of the afternoon. We took a bunch of photos. After the photo shoot was finished we did what any normal group of adult women who live in a country that doesn’t allow women to drive would do……. 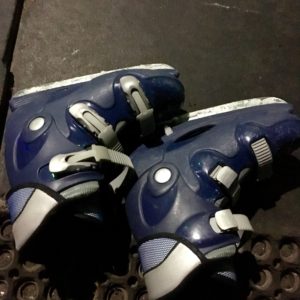 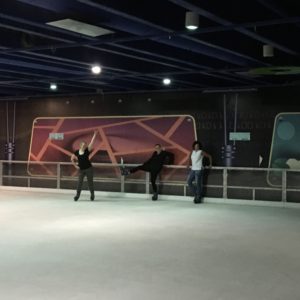 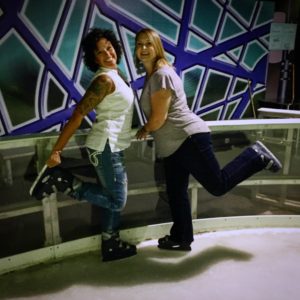 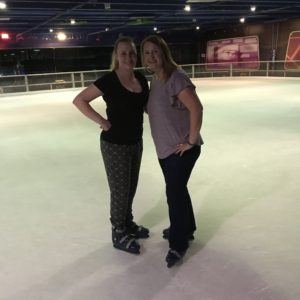 We went to the amusement park section of the mall and drove bumper cars. I’m not kidding. It was super fun. Most of the malls here have amusement rides and games and such, but often women aren’t allowed on them. Thankfully, we were the only ones there so we had free reign of the place. I read an article a little while back that Saudi women practice driving with bumper cars which is equal parts both funny and sad. While I do very much miss driving living here I would never actually want to drive here even if it was allowed.  As I’ve previously mentioned the driving here is completely insane and I don’t think my reflexes are fast enough and I worry that I would have massive road rage and end up flipping people the middle finger every 30 seconds. So bumper cars it was. We had an afternoon filled with childhood fun and next week we’re planning on hitting up Snow City which is the newest attraction in Riyadh- it’s supposed to be like Ski Dubai but from what I can tell it’s just sledding and tubing on the snow. I’m sure whatever it is it will prove to be fun regardless!! 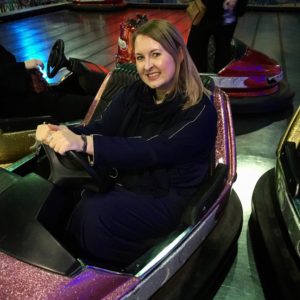 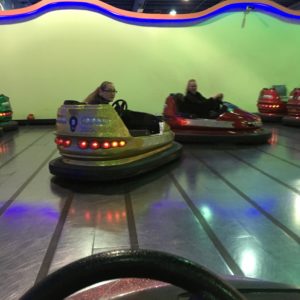