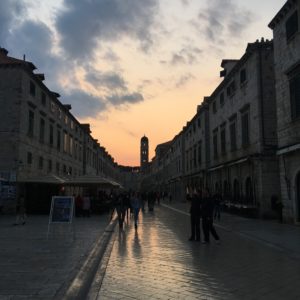 If you watch that popular TV show called Game of Thrones then you probably know that part of it is filmed on location in the medieval city of Dubrovnik Croatia. I’ve never seen it, but the city is chalk full of Game of Thrones tours if that happens to be your thing. Last week I returned from a trip to Croatia spending my time in Dubrovnik and Split. Originally I had wanted to visit Luxor Egypt as this has been on my travel bucket list for a long time, but the security situation isn’t ideal right now so the next place I really wanted to go was Croatia. For the first week of this trip I had a travel partner from back home, a guy I met about a month before I returned to Saudi this last time. He hasn’t traveled much but was keen to travel so when I left I told him if he ever wanted to tag along on an adventure with me he was more than welcome. We ended up being great travel partners. He’s low key and went along easily with my shenanigans, so we had a lot of fun. Also he follows directions really well and never let on that he was getting annoyed or tired of being directed to take photos for me (of me.) Don’t get too excited though Mom and start buying wedding gifts- we’re just really good friends.

We met up in Frankfurt and flew into Dubrovnik together. As I’ve mentioned the only way I’m comfortable traveling is medicated, buzzed or exhausted. If I’m sleeping on a flight then I’m not focused on dying which makes it pleasant for myself and whoever I’m traveling with. The previous day I worked a 12 hour shift, came home, showered and took a red eye flight to Frankfurt. I had a 4hour layover so we hit the Lufthansa lounge and got me some wine. Wine + severe lack of sleep were a perfect combo as I didn’t really wake up until we were approaching the airport. Dubrovnik airport is small. Like it makes the tiny airport of my home town look impressive. I had booked us into an Airbnb in the Old Town and the owner sent her husband to come collect us which was super helpful. Dubrovnik is made up of the Old Town and then newer modern bits. The Old Town is built along the water and is basically a walled city, and the newer sections span up and outwards to the hill above it. The first view of the Old Town driving from the airport leaves a lasting impression. It looks medieval and magical and you can hardly wait to start exploring. 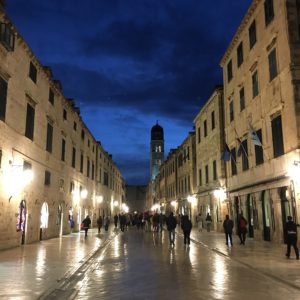 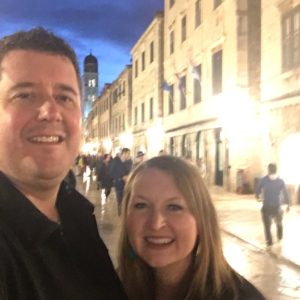 Dubrovnik is a photographers dream come true. Pretty much every way you turn your head is a postcard worthy picture. The best views of the entire city are by walking the old walls, from Fort Lovrijenac, or viewed from the hill overlooking the city by way of the cable car. The terracotta roofs offer a perfect contrast to the deep blue of the Adriatic Sea. I took a ton of photos from these locations. Walking the walls of the Old Town requires good walking shoes as it’s steep in sections and bring a hat and water for hot days as there’s little in the way of shade. Dubrovnik is a tourist destination the year round. We were there in the shoulder season when only a few cruise ships were docking and it was still extremely crowded in the Old Town some afternoons. I read that during peak season 10,000 tourists are dropped in Old Town although they are looking at decreasing it to 8000. Personally, I hate traveling during peak months because I find other tourists annoying so I’m willing to risk maybe no so great weather in exchange for me not having a full fledged melt down when someone runs over my toes with a baby stroller for the tenth time that day, or when a large tour group cuts the line. 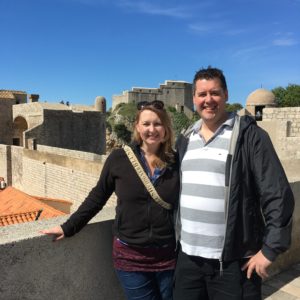 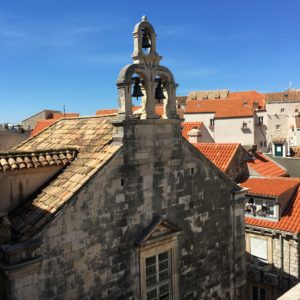 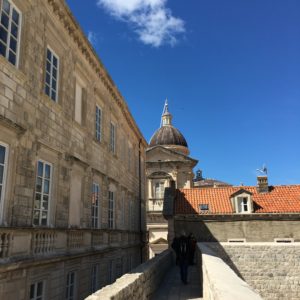 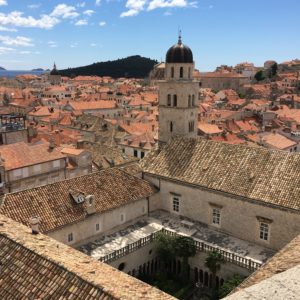 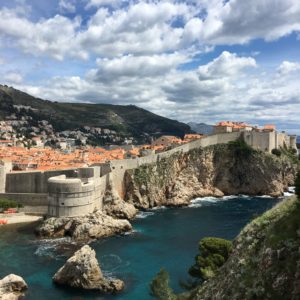 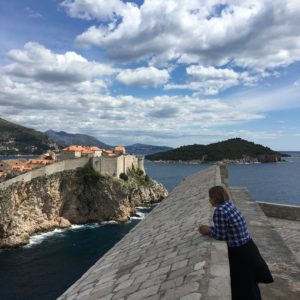 We used Dubrovnik as a base for us to travel from. We spent only a couple days actually exploring it and then did a couple morning trips to the south of Dubrovnik and fit in two day trips to neighbouring Bosnia and Herzegovina, and to Montenegro, all of which I will fill you in on upcoming blogs. I will also tell you a 7th grade explanation of the Croatian War of which I’m no expert but you should have a basic understanding of prior to visiting the region. Over half of the building in Dubrovnik were damaged in the conflict of the early 1990’s, many in the Old Town. You can assess the damage when you walk the old city walls- the buildings that were damaged all have shiny new roofs. This is one of those places where history and war are intertwined and this war happened not so very long ago. 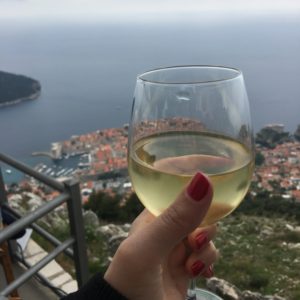 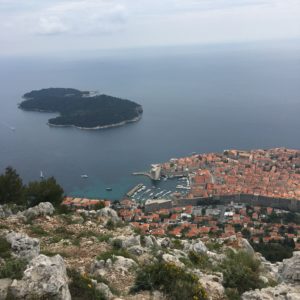 We spend an entire day just exploring the Old Town. Wandering the streets and alleyways to see where they led. Stopping into churches and Old Buildings and grabbing an afternoon glass of wine. I had no idea prior to going to Croatia that it had such a huge wine culture. Trust me- Croatia has many good wines. I drank enough of them to be sure of that much. And really good oysters and seafood. And you know what pairs well with oysters and seafood. Yep chilled Croatian wine of course. There are two bars on the cliffs overlooking the sea just outside of the city walls- I would highly recommend getting a table at one of them and watching the sunset. You won’t be disappointed. The morning of our last day after my travel partner had left to catch his early morning flight I got up around sunrise and wandered the Old Town taking photos. The streets were pretty much empty save for street cleaners, early morning delivery men, locals walking their dogs, and the odd traveler who had the same idea as me. It was a really nice way to end my time in Dubrovnik- outside, alone with my thoughts and my camera watching the sun peak through the buildings in the Old Town. 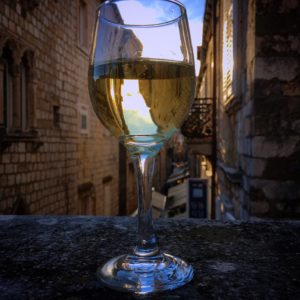 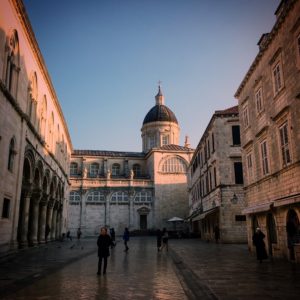 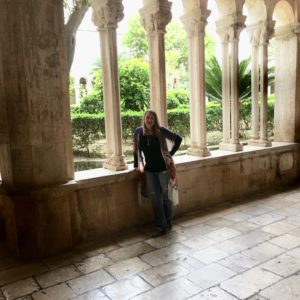 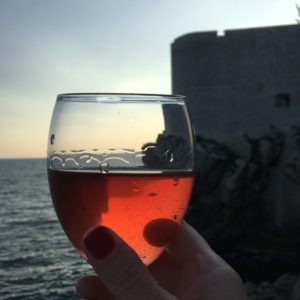 If you’re pressed for time you could probably explore the Old Town of Dubrovnik in a day. I’ve long ago given up on traveling fast and furious and trying to pack as much in as possible though. For me, spending a week there and allowing for day trips, and afternoons naps, and time to write and sip wine suited me just perfectly. June, July and August are peak tourist time so plan your trip to Croatia accordingly! 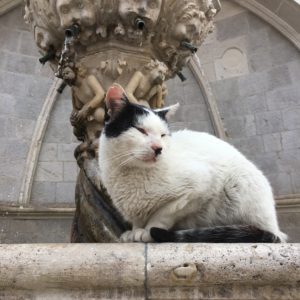 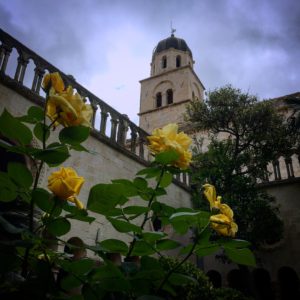 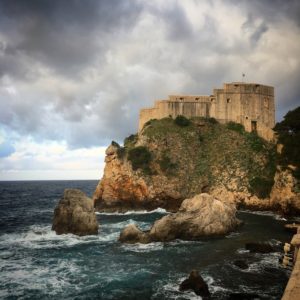 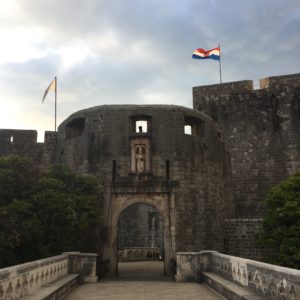 As for me I’ve got a bunch of blog posts in the works. I’m looking forward to telling you about the rest of my time in Croatia and then planning on writing a series of posts about Pops and my time on the Camino de Santiago this past fall. I’m going to Geneva Switzerland for a long weekend near the end of the month and then I’ve got some vacation time in June that I haven’t quite narrowed down where I’m wanting to go. Georgia (the country) is high on the list as is Ethiopia so I’ll keep you posted. I’ve been mostly laying low since I got back from Croatia. My social life had been pretty hectic the last couple months so I’m a little emotionally burnt out and am being more selective about what I’m getting up to. I’ve also been getting a lot of emails from nurses who are interested in working in Saudi so I’m the process of writing a post to answer some of the most common questions I get asked. So that’s all for me. Hope ya’ll are well and thanks for stopping by.