Back in April I spent 10 days in Croatia. A week of it was based in Dubrovnik as I previously told you about. The remainder of my time was spent further north in the city of Split. Dubrovnik made a great base from which to explore from. Two of the places we explored were a very easy half day trip from the Old Town. If you are planning a trip to Croatia be sure to include the towns of Cavtat and Kupari on your list. Both are to the south of Dubrovnik and both are accessible via public bus or if you’re lazy like me then Uber or local taxi. But Uber is by far cheaper.

The seaside town of Cavtat is about 30 min south by car.  It is an idyllic town with hotels, shops and restaurants. There is a cute little harbour and the water is that prefect shade of turquoise blue. You can walk around the rugged coastline and scramble over the rocks along the shore. While I was there we had the good fortune of meeting up with a fellow travel blogger whose blog I have followed for years but never actually met in person. Gigi writes a blog called The Ramble and has been a long term traveler- she travels with her boyfriend Chad and super cute dog named Luna. The three of them met us and we spend a few hours wandering Cavtat, chatting about life and travel and eating one of the best meals we had during our time in Croatia at a restaurant called Bugenvila. They have a seasonal menu that changes monthly- the fresh oysters, pork belly and blood orange sorbet were fantastic. With full bellies we decided to take a local ferry back which offered great views of the Old Town of Dubrovnik. I would highly recommend doing that- especially if you fancy some great pictures. 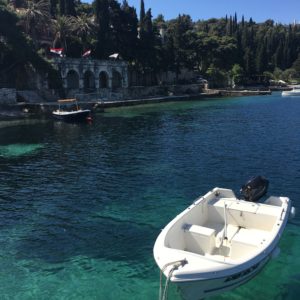 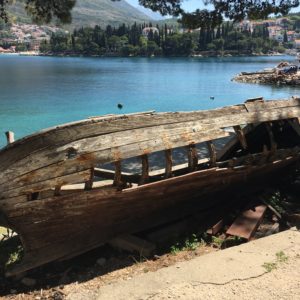 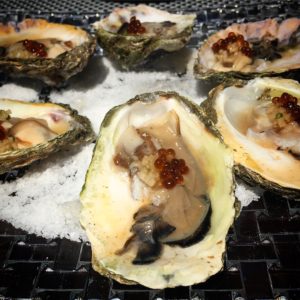 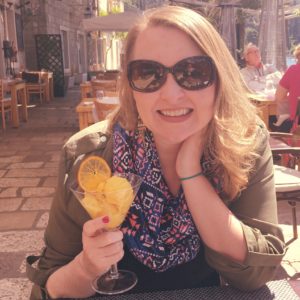 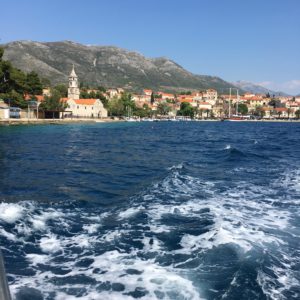 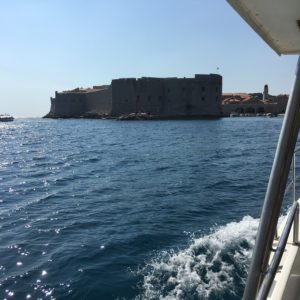 This was by far my most favourite thing I did in Croatia. I had previously seen photos of large abandoned hotels on other bloggers websites and Instagram. Gigi had also written a blog post about it a month or 2 before my trip so the images had stuck in my head. Kupari is a town on the Adriatic Sea about a 15min car ride from Old Town. It was a military resort for the Yugoslav Army and consisted of 5 hotel complexes. Most of the resort complex dates from the 1960’s except the opulent Grand Hotel which was built sometime in the 1920’s. The hotels surrounding the Grand Hotel were more of a Soviet era architecture and are strikingly different from the Grand Hotel. The resort complex was used until the early 1990’s when the Croatian- Bosnian War (otherwise known as the Homeland War) started. The Yugoslav Army then razed the entire complex. Everything was looted, and much of it was burned.

The resort complexes overlook the lovely Kupari beach which is used by locals. We jumped in a taxi and told him to drop us at the abandoned hotels. They are just off the main road and it’s a short walk towards the beach and you will see the eerie structures rising above the tress. The complexes are open. You can literally walk right into the abandoned hotels. There is no security guard, no security fence, no warning signs (at least when we visited.) But it goes without saying that entering  these sites is not without risk. The windows have all been blown out and there is glass littering the floor. The stairs are in varying stages of decay. The elevator pits are open.  There is exposed wire. Don’t let this deter you though. If you are a fan of urban photography then this is a place worth exploring. There were very few other people there although many local people were walking their dogs or strolling in the park area in between the hotels.

We chose to visit the large hotel on the right when walking towards the beach- it turned out that it was actually two different hotels with an attached walkway in between the two. There’s a sad little playground with a plastic slide on the side of the hotel. You enter through what would have been the main entrance but is just an opening on ground level and we climbed the debris riddled stairs 2 floors and did a little exploring. There is graffiti and abandoned bits of furniture and nothing especially remarkable in this first hotel. We then walked into the hotel that is connected to it and over looks the Adriatic Sea. This hotel was quite remarkable in that nature is literally reclaiming the hotel. Trees have grown in the courtyard winding themselves around bits of the remaining stairs and since the windows are missing the sea winds breeze through. You can explore the individual hotel rooms- but nothing much remains. There are bits of tile here and broken bits of furniture there. Anything of value was long ago looted. 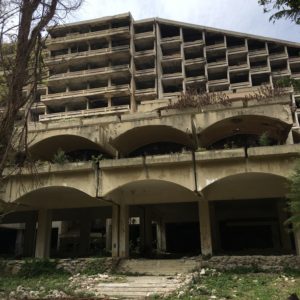 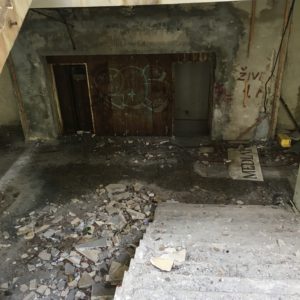 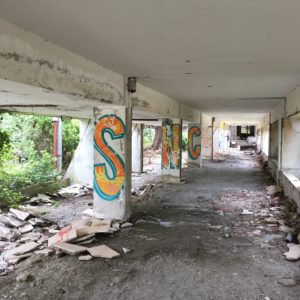 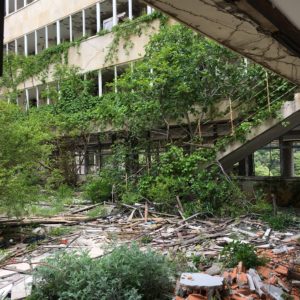 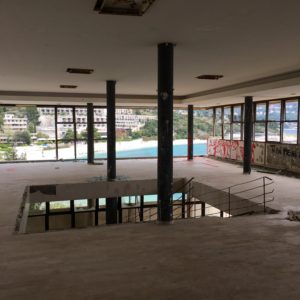 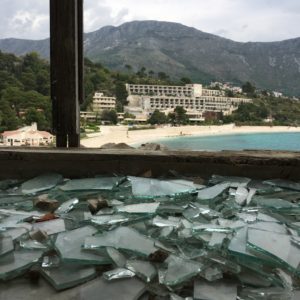 From here we exited the way we came in and walked over to explore the Grand Hotel. And grand it is. It has a colonial air to it. Parts of the arched window frame and terracotta tiled roof remain. There’s the lingering remains of the tiled floor and bits of patterned wall paper lining the walls. What was once the grand staircase has been completely destroyed but still makes for a stunning picture. The roof is missing over part of the hotel but still it’s magnificent. Out front of the Grand Hotel is another large ruined hotel and the wall outside is adorned with some artistic forms of graffiti. We didn’t venture into that one but it reportedly has an abandoned in ground pool. 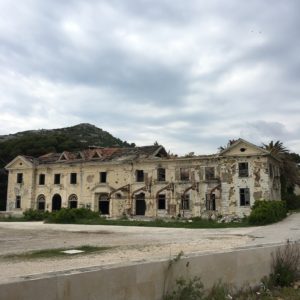 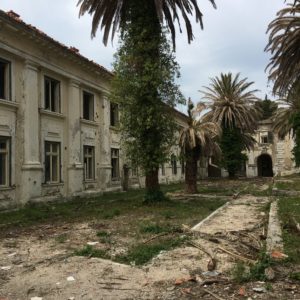 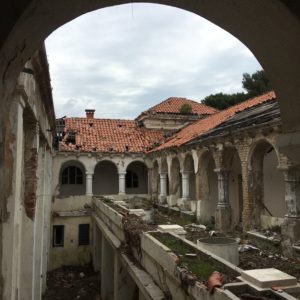 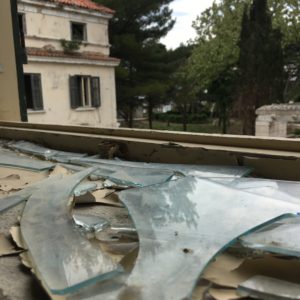 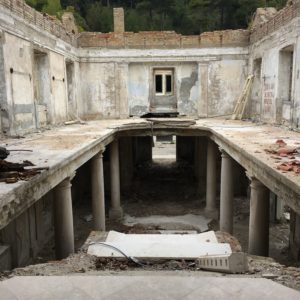 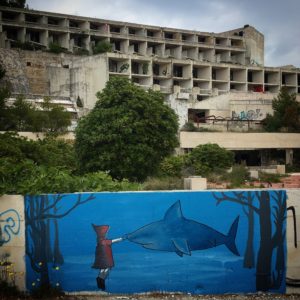 So if you’re heading to Dubrovnik and like odd places to take interesting pictures this is the place to go. That being said- I wouldn’t go alone, and I wouldn’t go at dark. Wear very sturdy shoes because as I mentioned there is glass and nails on the floor. The entire complex has been privatized and sometime soon a new 5 star resort will be built on the land, so go now while you can. During my research I did find mention that the Grand Hotel will remain though, as it’s a protected historical building. Time will tell……

Have you even explored abandoned places while traveling? If so where- I’d love to add them to my ever growing travel list!