Well folks it finally happened…..after years of traveling I finally got what I’ve always dreamed of….an upgrade!! I’ve lived in Saudi Arabia for nearly 4 years total and every time I turn up to the airport I make sure my blond locks are on point and my lipstick is in place in the hopes of getting an upgrade. Sadly, the most this has ever gotten me is some hardcore stares and some passive/borderline aggressive flirting. But never an upgrade. All this changed last week when I returned from my 59th country after taking a solo trip to Azerbaijan and Georgia. I’ll be blogging more on them later but both were awesome and I would highly recommend adding them to your travel list.

So originally I had booked my flights from Saudi on Qatar Air, which is a really nice airline and since ya’ll know how stressed I am about flying I like to fly with airlines that I know are very safe. Then the diplomatic row broke out between Qatar and the neighbouring Gulf countries and a week before my trip all flights with Qatar Air were canceled coming in or out of Saudi (and several other countries.) Luckily I got a refund but was left stranded trying to buy last minute tickets and now my only options were mostly budget type airlines which freaks me out. As it turned out the only real way to continue with my planned itinerary was to by 3 one way tickets so I flew Emirates to Dubai and then Fly Dubai into Baku Azerbaijan. This wasn’t an option as a return flight as the flight times didn’t line up. I then flew Azerbaijan Air from Baku to Tbilisi Georgia and then bought a really short flight connection back with Gulf Air via Bahrain with an hour layover. I had looked to buy a round trip ticket with Gulf Air but there were literally no flights the week that I was leaving. No flights, not tickets. This should’ve been a tip of what was to come…..

So anyways I flew to Dubai. While I was waiting for my connection someone from Gulf Air called me and told me my return flight in 9 days was to be delayed leaving Tbilisi and that I would miss my Riyadh connection. I was like how the heck can you possibly know that a flight will be delayed by 2 hours in 9 days time??! Sleep deprivation and irritation over all ready having to re-book this trip made me basically tell the guy that “this is unacceptable and if the flight isn’t going to be on time then just refund my ticket and I’ll fly home via Dubai.” This ladies and gentlemen will prove to be a hilarious statement later in this story. The guy ended up calling me back like 30min later and saying that the flight was back on track.

So I spent a couple nights in Azerbaijan and then on the day I was flying to Tbilisi Georgia there was a wind storm and on the way to the airport I was thinking there’s no way this flight is going to take off but it did. And because it was a short flight and I was getting in after dark I decided not to medicate because I don’t like being groggy solo in a new place once the sun has gone down. Lets just say that flight was a very religious experience for me. Me and G.O.D became one that flight and I regretted not medicating the entire hour. I spent the next week traveling in Georgia which I will tell you more about later. The days leading up to my flight back to Saudi I 100% expected to get a message saying that flight was delayed. It is a very Middle Easter thing that instead of dealing with a problem people will just tell you what you want to hear instead of having to deal with you getting angry. Anyways when I did the online check in everything was on time.

So I arrive at the airport and make my way to the check in counter to check my bag. There are like eight Gulf Air staff eagerly standing around. I walk up and they start to get very excited. The check in process starts and they tell me I am their first customer. I’m all “of the day?” And their all “no ma’am ever. This is a new route for Gulf Air.” And I’m like that’s cool and they hand me a bag with flowers and ask to take my picture and I’m immediately regretting not wearing something a little more low cut and a little more fashionable. After photo time is over I ask to make sure I have a window seat and someone makes a comment that not only am I the first customer I am the only customer that day. And I laugh because surely they must be joking. So yes I get a window seat in economy and I go sit down nearby the check in area as I wanted to text my friends at how cool it is that I’m their first customer. In the meantime some men in suits who are obviously “someone” in Gulf Air arrive. The Gulf Air staff are shaking hands and everyone is patting each other on the back. And then someone points in my direction and the men in suits come over and introduce themselves and ask can they have their picture as well. And I’m all “sure boys I don’t see why not.” And then one of the men asks me for my boarding pass and comes back a few minutes later with it and I’ve been upgraded to Business Class. I damn near hugged the guy I was so excited….. 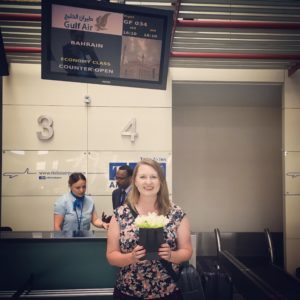 So I go thru security and then wait at the gate. The flight arrives from Bahrain which is the first flight on that route as well and so there are people on the tarmac taking picture and there were two firetrucks spraying the plane as it pulled up to the gate which is apparently something they do on inaugural flights. Who knew?! So I’m waiting at the gate and there are like maybe 5 other people sitting in that area so I just assume they are also on my flight. So it’s finally time to board and they overhead page the flight. And I’m expecting these other people to get up and board but they don’t so I walk up to the desk and a man comes up and says to me “shall we go?” And escorts me on the plane. I just roll with it because I’m still not realizing what is happening. And so I get to the plane and everyone is clapping and there are more photos and I’ve literally got the entire plane to myself. They tell me I can sit wherever I like (because I’m the only passenger.) They overhead paged a flight solely for me! It’s not like it was a small plane either it was an A320 which seats probably 150 passengers. So I pick a seat in Business Class and immediately start sipping champagne as we take off. It was totally the bomb. I skipped medicating in lew of alcohol and am so glad I did! 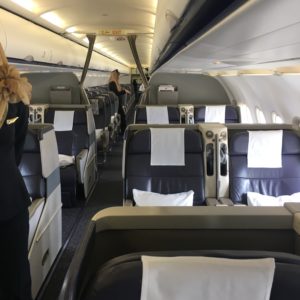 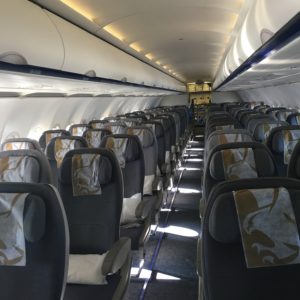 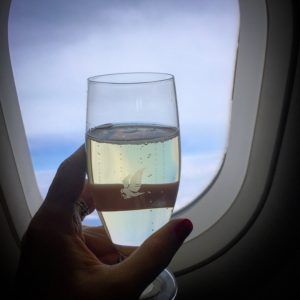 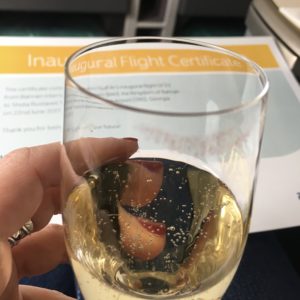 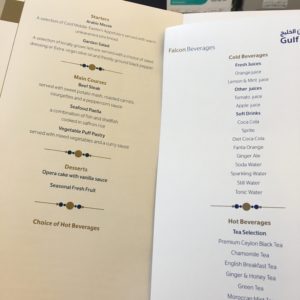 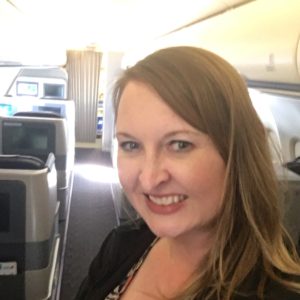 Let me just say that flying will never be the same if I’m not sitting in Business Class on my own private plane. The seats up there are super comfortable, the food is about a million times better and also unlimited champagne. I just sat there and smiled the entire time, and took a noteworthy amount of selfies. Then I fully relined my chair and took a cat nap (most likely on account of the champagne and wine). In hindsight I probably should’ve sat in literally every seat just to say I had. But truth be told, I kept expecting them to realize that I was a famous blogger from Saudi Arabia (not so much) and offer me free flights for life or at the very least a year! Sadly, that did not happen. But I will forever rave about Gulf Air as I do think they are pretty great! I even got a certificate saying I had taken part on an inaugural flight! For those of you who know me you would expect that I asked to see the cockpit. I was very relived when they told me I could but only when the plane was on the ground, so they kept things according to safety standards. When we landed I took a picture of the cockpit and then was asked if I wanted to sit in the captains seat and I was like “YES.” And then as if the guy knew my soul he asked if I wanted a picture in the captains seat wearing his hat. “I 100% did.” BEST DAY EVER!!! 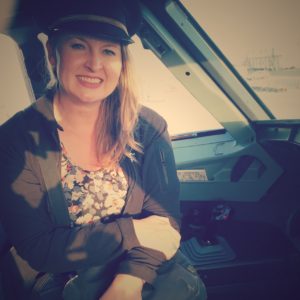 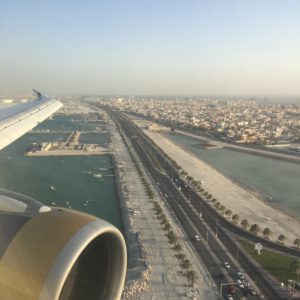 After that I boarded my flight to Riyadh, Saudi Arabia where I was not upgraded and so it seems Cinderella left her glass slipper in the Business Class area on that Gulf Air flight from Tbilisi to Bahrain. In’Shallah she gets it back sometime soon. This whole thing makes that previous phone call a riot now though. Can you imagine that I told someone that it was unacceptable for that flight time to be changed not knowing that I was the only passenger booked on that flight. What a total diva. But cheers Gulf Air for making my travel dream come true and finally offering me the upgrade I’ve waited 59 countries for!