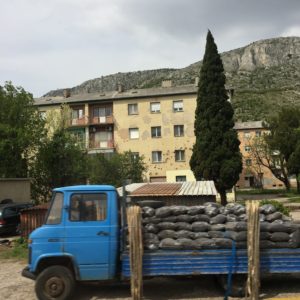 Back in April I spent 10 days in Croatia and I wanted to talk a little about the history of the region specifically, the Croatian-Bosnian War, before I tell you more about my time there. Just to preface this- you all know I’m relatively smart, but I’m definitely no history scholar, and even though I was a teenager when this war took place I don’t really remember much about it. I do think it’s a good idea though to have a bit of understanding of the history of a place before you visit it. So this is my 7th grade history summary of the events that took place in the early 1990’s.

Remember that country that used to be call Yugoslavia– or more accurately the Socialist Federal Republic of Yugoslavia? Well it was made up of the present day countries of Croatia, Bosnia and Herzegovina, Montenegro, Macedonia, Serbia and Slovenia. This socialist state was formed after World War II and was ruled by Josip Bronz Tito until his death in 1980. Following his death things started to heat up in terms of ethnic pride in the region and economic challenges. The late 1980’s saw increasing Serbian pride (Serbians are the largest ethnic group in the area) and increasing popularity of a Serbian communist named Slobodan Milosevic. 1990 saw increasing violence especially in Croatia between Serbian Croats and Croatians. Neighbouring Slovenia voted for independence and Croatia followed in its steps- both countries declaring independence on June 25, 1991. The following day the Yugoslav army mobilized troops and moved towards Slovenia. Slovenia gained its independence over a period of 10 days with minimal casualties and damage. Croatia did not fare the same.

August and September 1991 saw increasing sieges and massacres in Croatian towns by Serbian forces of the Yugoslav People’s Army. The Battle of Vukovar for instance saw complete destruction of the city with territory being seeded to Serbia and ethnic cleansing of the non-Serbian population with hundreds of civilians killed and some 20,000 people forced to relocate. Then in October 1991 the Yugoslav Army started advancing towards Dubrovnik from Montenegro capturing the territory surrounding it. Full scale war broke out across Croatia. The Dubrovnik attack lasted nearly 8 months and resulted in a Croatian victory but more than 50% of the buildings in the Old Town were damaged and some 80 civilians were killed. By the time the war ended in 1995 some 20,000 people had been killed as a result and half a million people were displaced.

1992 saw Macedonia and then Bosnia and Herzegovina declare their independence. In April the Bosnian War started and the siege of Sarajevo began. This conflict was between the Yugoslav Army forces made up of Serbs against Bosniaks (mostly Muslim) and Croat forces. It lasted nearly 4 years and resulted in massive civilian death and displacement. 100,000 people were killed and 2.2 million were displaced. The Bosnian war used ethnic cleansing, genocide and rape which later resulted in war crime charges. The Croatian-Bosnian War is the most devastating conflict in Europe since WWII.

This is obviously just a brief summary of the events that took place- the history of conflict in this region is complex. The effects of the war are still evident, especially in Bosnia and Herzegovina where bullet holes are still visible on the sides of buildings. The buildings like the people carry the scars of this war. Dubrovnik itself was rebuilt and from an outward appearance the signs of the conflict are hidden. Shiny new roofs adorn buildings that sustained damage and if you weren’t aware you might wander its old cobble stone streets none the wiser. You could spend hours and hours reading the history of the conflict pertaining to the different countries, and like all wars each side has their own story. While in Croatia I visited Bosnia and Herzegovina and also spend a day in Montenegro which was largely unaffected by the conflict. The guides spoke of the history of the region but cautioned against speaking to locals about it as the wounds are fresh and the loved ones they lost not so long ago buried.

In the next few weeks I’ll tell you more of my time in Croatia. I’m heading on vacation tonight on a solo trip to Azerbaijan and Georgia for some R&R which I’m very much looking forward to. I’ve been laying low the last few months from a foot issue I likely developed as a result of walking the Camino de Santiago this past fall but yesterday I had a steroid injection so inshallah I’ll be back to my normal activity level in the next few weeks….fingerscrossed!