So, I’ve never been a skinny minny (well except for maybe in high school) and I was in no way skinny the last time I was in Saudi. Maybe a little skinnier than my present weight, but not skinny. I’ve always been more of an average (could lose a few pounds) kinda gal, and I’m perfectly ok with that. Several of the staff I worked with back in  2010/2011 are still working on the unit I left and have since returned to. On my first day on the unit a Sudanese house keeper who I remember came up to me and was excited to see me and my kiwi sidekick. She looked us both up and down and then puffed out her cheeks at us and held her arms out from her body to give us the universal sign for “you got fat.” But we were never skinny to start with lady. As we walked away I said to my kiwi mate- “was the fat face really necessary?”

In many parts of the world telling someone they need to lose weight is not meant, or taken the way we do in western countries. Its just meant as stating a fact. Not meant to be cruel or mean, just a mere exchange of info. In February while in Nepal with my American bestie I have a vivid memory of taking a bicycle rickshaw and the man trying to demand more money than we had originally negotiated on account of our size. He made an amazing display his disappointment grunting and wheezing as he shuttled us around Kathmandu like he was hauling a truck load of cattle. He likely, has a future in Nepalese soap operas based off his acting skills!! Anyways, back to Saudi…….a couple days after my fat-face encounter I ran into another housekeeper I knew from before. He is from the Philippines. He exclaimed “sister you came back!!” And I said yes. And then he said “last time you skinny. Now….(and he paused to find the appropriate words)……not skinny.” I was at least thankful he didn’t make the fat face to me, or any other type of sign language to indicate my size. It doesn’t really help my case given that I’m an average sized 5’8″ gal working with mostly Asian nurses who hardly break 5’0″. I’m like a giant. I couldn’t be more acutely aware of my size.

So last week I was walking briskly down the hall and the housekeeper that originally made the fat face at me saw me. She stood in place and started pumping her arms up and down and as I got closer she yelled “exercising, exercising!!!” with great excitement. So that’s my current life. I’m getting cheered at while I walk. Maybe I should bring her to the gym with me?! I want to leave you with a photo to give you an indication of how I feel at work. This is from 2 years ago when the Seahawks were visiting patients when I worked at the University of Washington Medical Center. Here in Saudi I am obviously the football players, and my teeny tiny Asian co-workers are me. Thanks for reading!! 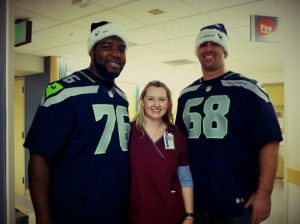 Where to even start about the Riyadh Zoo….

Brunch at the Ritz…..