Merry Christmas and Happy Holidays!! This time of year is always hard when you’re away from home and those you are closest with. The previous Christmas that I spent in Saudi in 2010 was simply awful. Back then the word Christmas wasn’t uttered outside of the ex-pat circle. It was hard to find anything even remotely Christmassy and I didn’t have a single Arabic staff or patient wish me a Merry Christmas. That Christmas I had to work, and up until that point it was my first Christmas away from home. To say I was miserable was an understatement. I remember skyping family and friends back home and crying because I was so homesick.

Returning to Saudi this year I expected the holidays to go much the same as I had remembered, but I couldn’t have been more wrong. I came armed with some small Christmas decorations, but as I previously mentioned its not been very hard finding decorations and Christmassy things here. I channeled my inner Martha Stewart and made a fake paper Christmas tree to put up on my wall and hung decorations that I bought at a local store around our apartment. Friends of mine have Christmas trees with lights that they also were able to easily and legally purchase. Last week we had a “Holiday” themed party at work complete with Christmas lights and a secret Santa gift exchange. I had to work Christmas Eve and I had several Muslim co-workers wish me a Merry Christmas. It was very heartfelt and I really appreciated it. A family tradition of mine from back home is that we do a cheese fondue and seafood meal on Christmas Eve. I love everything about Christmas and this meal on Christmas Eve is something I especially look forward to. Since my dearest friends in Saudi were not quite as jazzed as I was about Christmas I wanted to try and include the fondue dinner tradition back home into a night here. But alas, fondue was not in the cards for us. So we went to a French restaurant which was ok, and then we went next door to Tim Hortons which I was super pumped about…..until I found out that they were out of coffee. Well the coffee of the takeaway variety, as I was looking forward to making fresh Timmie’s coffee every morning before work. The guy that worked there told me that they were waiting for the coffee to arrive from Canada and that they had been waiting about 6 months for that to happen. So that’s Saudi for you!!

So Christmas day we went for breakfast at a highly recommended restaurant called Paul’s. It was lovely. In fact, you could almost convince yourself that you were in a European cafe- except for the fact that there were abayas and thobes as far as the eye could see. If you’re in Riyadh you should go. They have a nice outdoor seating area, and delicious baked goods to take home for a treat later. After breakfast we did what any normal person would do on Christmas Day in Saudi Arabia. We went shopping for masquerade masks for a New Years party we’re going to. Then we opened gifts. I got some lovely things from my friends here, and some friends back home. And then later we went to a Christmas Party at a compound here and I ate turkey and listened to Christmas tunes. Then I skyped home for a while. And I didn’t even cry. Because although I wished I could be there, I was actually ok with being here. 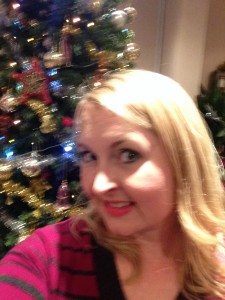 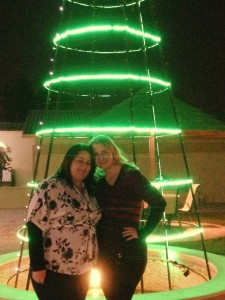 So a belated Merry Christmas to all of you from inside the Kingdom. And all the very best in the upcoming year!