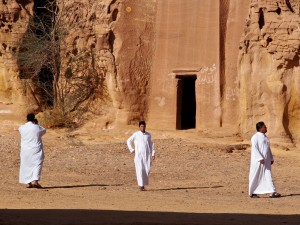 Mada’in Saleh is one of 3 UNESCO heritage sites in Saudi Arabia. It’s located about 20km from  Al Ula and was part of the Nabatean Kingdom, with Petra in Jordan being the capital. It predates Islam and is believed to be from the 1st century AD. Tha Nabatean’s were believed to control vital trade routes and were a nomadic people. It’s hard to compare Mada’in Saleh to Petra. When you visit Petra you wind your way through the rock walls and the suspense builds up until you walk into an opening and are awe-struck by the Treasury. The entire area is walkable although you need a couple days to really do it justice. Mada’in Saleh is quite different. First off, you drive into the site, and you can park right in front of the tombs. A few have designated parking areas, but the majority you can have front row parking. Much of the actual city has yet to be excavated, as it remains covered by layers of sand. It is thought that the tombs were the only permanent structures of the kingdom, and that the actual homes were more of an adobe style. 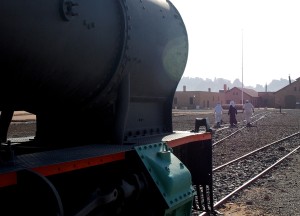 When you first drive into the site you pass the remnants of the Hejaz railway that was constructed in the early 1900s to connect Damascus to Medina. It was designed by German engineers but the line was never completed after a portion of it was damaged during the 1st World War. It’s interesting to see the German architecture of the remaining buildings and know that not far from there are the tombs from the Nabatean Kingdom. We of course stopped, and took photos of each of us climbing on the restored train that is there. If was fun to watch other Saudi tourists (mostly men wearing thobes) also climbing onto the train and taking seflies.

From here we drove on further and came to the first set of tombs. Tombs from the Nabatean era bare hallmark signs. They are carved out of a rock face. The front of the tombs are quite plain in nature with strong geometrical lines. Some of the tombs were adorned with wings and what I can imagine would have been an eagle or falcon were the head of the sculpture still attached. The tops of most tombs were cared with a series of 5 steps, while the inside of the tombs there were shelves carved out where the dead were housed. The tombs ranged from commoner, to upper class to royalty with some of the tombs having burial chambers outside for slaves. There are several different tomb sights to visit. Some house several tombs that encompass huge rocks. My favourite and I’m sure most people was Qasr Farid which is the largest single standing tomb. It’s visible from quite a distance. 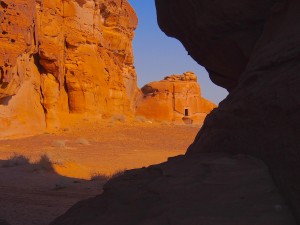 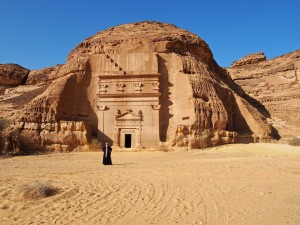 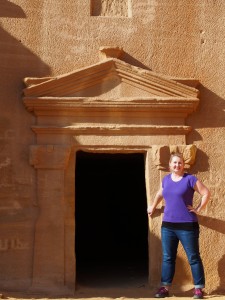 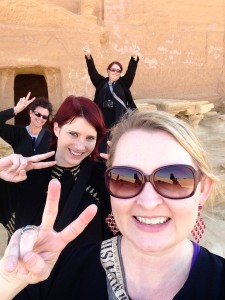 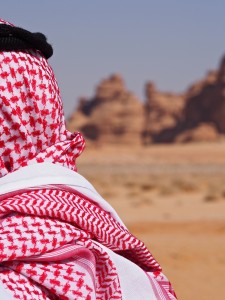 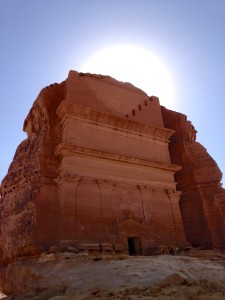 The last place we visited were the temples in the area of Diwan. This is the site where cult practices took place and the area is made up of unique rock formations that very much reminded me of prehistoric times. There’s a narrow passageway that opens into a open area surrounded by towering rocks with a dam at the far side. We hiked to the top of one on the rock formations (not the easiest of feats in an abaya.) The views from the top were spectacular. 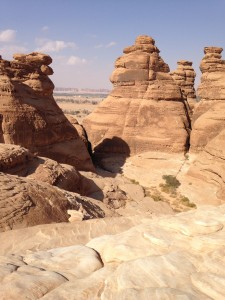 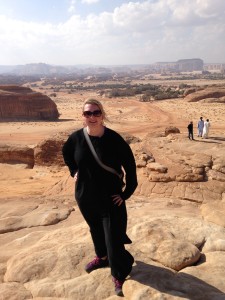 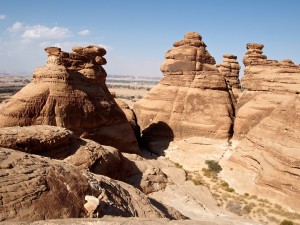 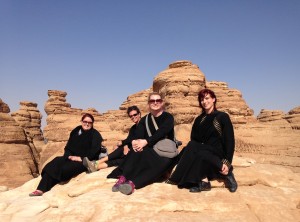 Mada’in Saleh is well worth the trip. Go in the winter months when the temperatures are tolerable. The guide books have it right- if you only do one thing when you’re in Saudi Arabia this is it. I regretted not seeing it on my first Saudi tour of duty and am so glad that I went. So go. Go now while you have the chance!!