A couple posts ago I raved about one of the biggest, if not the biggest cultural festivals in Saudi Arabia called Janadriyah. In case you missed it, you can read about it here. I was super keen to go this year since it was cancelled last year. I had read about the opening hours on another blog, and after consulting the Saudi tourism website to confirm that yes, it is actually open in the mornings, apparently from 9am-12 and again in the afternoon from 4-midnight. Yes. That’s what it said. Mind you the website also said that the festival took place in March (when in fact it actually was taking place in February) but I thought that some silly person must’ve messed up the Hijra to Gregorian calendar, and I had a little chuckle to myself.

So my kiwi sidekick and I booked our driver for 8:30am, as we only really had the time to go in the morning, and we headed out. As we started to get close I was kind surprised that there wasn’t more traffic. And then as we got closer, I was surprised at how empty the parking lot was. And then as we pulled up to the gate the security guard informed us that it was closed. And wouldn’t open until 4. Even though the Tourism website said otherwise. Damn. But, he did let us drive thru the festival site after making us produce ID. For some reason the only ID I had on me was my Canadian driver’s license, so our driver and the security guard all had a good chuckle about that. And we turned around and drove home. It was a well wasted $50 in taxi fare.

So a couple nights later after work and on our way to the airport to fly to Romania we had an hour to quickly take in the festival. It has such a great feel to it, even though the Mutawa were yelling at us to cover our hair prior to entering. Of which we obliged while we were in eye sight. There were tons of families, and young women would say hello as they passed by. Since we were very pressed for time our first stop was near a stage where an Emirates men’s dance troop was performing. Basically they stood in a line and did what vaguely resembled what my fellow North American’s know as “the wave” and moved in slow motion whilst holding thin cane like objects over their shoulders. The crowd was loving it, and it made for some great photos. 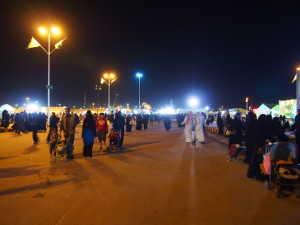 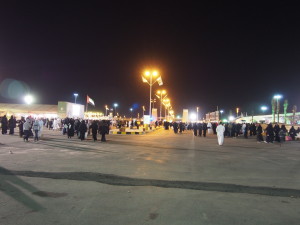 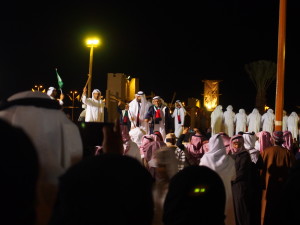 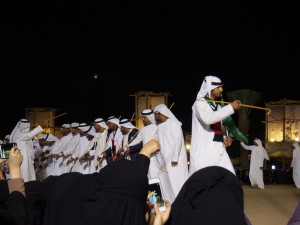 Our next stop was at the tent designated for the Saudi military. Because lets be honest ladies….who doesn’t love a man in a uniform?? There was a tank and a few other types of military vehicles on display. Sadly, we were unable to talk the guard into letting us get inside any of the vehicles, but this being Saudi it was worth the try. Inside the tent were display cases with the many different uniforms of the Saudi military and Special Forces with photos of some of the top military officers. The tent next to this one was for the Saudi firefighters. Hello firemen. So of course we went in here. They had some display related to firefighting in Saudi and they had a couple of old style firetrucks which we were allowed to climb in and get our photos taken. 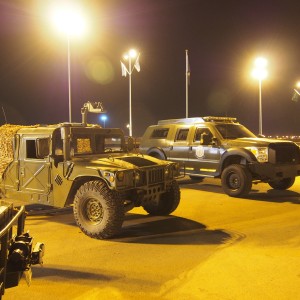 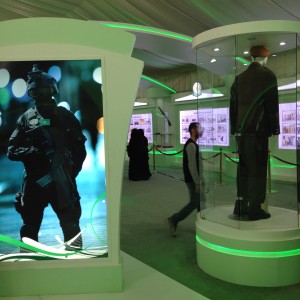 Many of the locals were dressed in traditional Saudi attire specific to the different regions of Saudi Arabia. Men were seen wearing belts with the curved dagger that is seen though out the Middle East. Women were seen wearing traditional Bedouin masks of 2 different styles. One was a shiny mustached version and the other style was made of shiny fake gold coins. Naturally, we had to buy both styles for souvenirs. Since we were so pressed for time we made a quick dash back to the parking lot where our driver was waiting to whisk us to the airport for our midnight flight to Bucharest Romania. But, more on that later……… 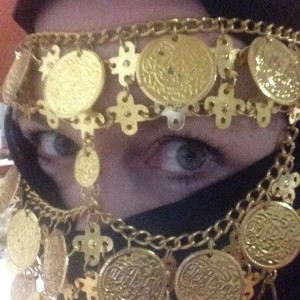 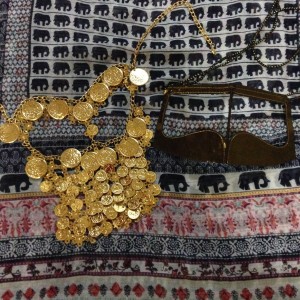