Old Diriyah is a site that I’ve been meaning to visit, but had never really gotten around to actually doing it. Then on a whim right after Christmas my Kiwi sidekick and I called our Pakistani driver and had him take us. Old Diriyah is located in the northwestern edge of Riyadh. It’s a historical city that served as the first home of the Saudi royal family and was appointed a UNESCO heritage site back in 2010. Currently there is a large scale preservation project in place so this enormous area can be opened to the public in the form of an open air museum. Although, truth be told- this is years away. The historical city is set in a lush wadi with tons of palm trees and it’s not very often that you get to see much green vegetation living in these parts. We visited late in the afternoon and besides reading a couple blog posts about the site we didn’t really know what to expect. 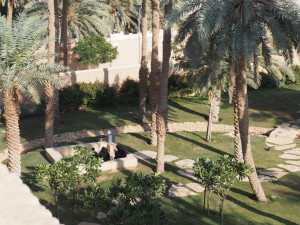 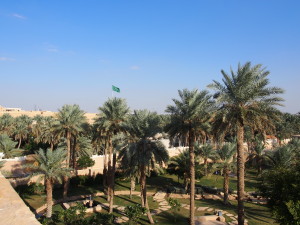 The actual historic area is currently closed to the public, but there is a newer commercial area with restaurants and cafes overlooking a man-made park that makes a great picnic spot. Naturally, there is a mosque- which we nearly walked into by accident, so pay attention when you visit. Since it was a weekend afternoon when we visited the place was packed with locals- mostly families there to enjoy having a picnic in the park. There were very few other westerners. We wandered around the area and then walked up to a viewpoint to see the historical site from across the road. On our way back to the main commercial area we were stopped by an Indian man who asked us if we knew where the museum was. It just so happened that we were also trying to figure out where the museum was as we were under the impression that there must be one there. We informed him that we were clueless as well just as 3 men in thobes (traditional Saudi male clothing) walked past us. The Indian guy yelled in their direction “Yallah Mohammed” and all 3 guys stopped and turned around. I’m not sure why, but we found this to be hilarious. Mohamed is one of the most popular names in the world, and they are especially found of it here in Saudi. If you don’t know a man’s name the best thing you can do is call him Mohammed because I promise you have a 50% chance of getting it right! 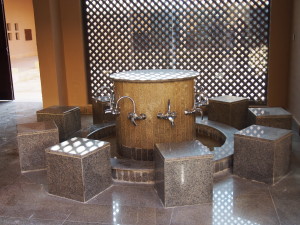 Foot washing station outside the mosque. 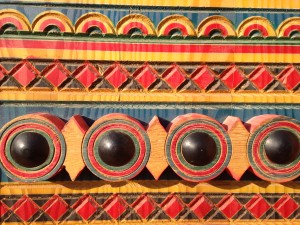 So the Saudi guys also did not know where the museums was. We would later come to find out that the “museum” we were searching for is in fact not open. The Saudi guys left and we stood chatting with the Indian fellah and he introduced us to his wife and daughter and then we were approached by a young Saudi couple and their toddler. We asked them about the museum of which they also knew nothing about and then they asked where we were from. As it turns out they had gone to college in Michigan so had a true appreciation for a North American winter and we chatted for about 10 minutes. Then they asked for our phone numbers and invited us to come to their place for coffee sometime. Now here’s the thing….I really want some local Saudi friends. I have a million cultural questions I want answered and I’m dying to be invited to a Saudi wedding. I was super hopeful that Naifa and Siraj were my in to Saudi life, but alas they never called. 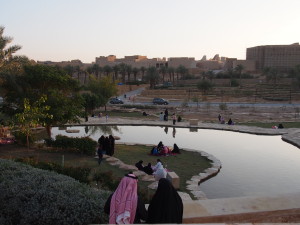 The picnic area with the old city in the back. 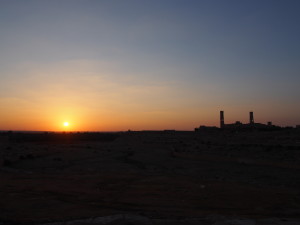 After our little chit chat session we parted ways and went to one of the many coffee shops in the main square. Alarmingly there wasn’t a Starbucks in sight, which is odd because Saudis love Starbucks. Like bigtime love it. We settled in for a coffee and some fantastic people watching. Childhood and parenting in general is pretty much the complete opposite as compared to back home. Discipline is somewhat lacking and most of the time the kids run the show. Often times the family is accompanied by a nanny or nannies and it’s entertaining to watch the kids just do whatever they want. I have witnessed on many occasions a child walk up to a table and take their hand and swipe anything on the table onto the floor. I’m talking like a 5 year old the whole time making eye contact with the parent or the nanny. Now if I pulled that shit as a child (which I wouldn’t have out of sheer fear) I would’ve been punished, made to clean up the mess and then sit in the corner or grounded. Here it’s an entirely different response. No one blinks, so harsh words are given, just a there there type of response and one of the adults will pick up the fallen objects. For me as long as the children are at a distance they can be very entertaining to watch.

We then walked over to the AMA which is an art venue that showcases local artists. If I recall the open hours are from 4-6. They didn’t open right on time, but some persistent door bell ringing on our part seemed to speed things up. The gallery is fairly small, but has a cafe and a gift shop inside. The art is obviously of an Arabic flavour of which I am a huge fan. Visually I think Arabic is such a beautiful language and I love to see it incorporated into art work. The AMA also hosts art exhibits which I think would be really cool to attend. There are a few other stores located near the AMA, but many were not yet open. There is also the very popular Najd Village restaurant which serves traditional cuisine. We didn’t eat at this one, but I have eaten at the other location which I would recommend if you’ve never experienced traditional cuisine which is eaten family style on the floor.

So that’s my take on Old Diriyah. I really hope that at some point before I exit Saudi for good that a portion of the older historical site will open. I’m tempted to contact the Saudi Commission for Tourism and National Heritage and ask them for a tour. If any of my readers know anyone with connections please do let me know as I would love to tour the old city!!

Travel as a Woman