Back in March I spent 11 days in Italy. Solo. And it was fantastic. When I was planning this trip I knew I was in need of some down time. Granted I wanted to see the sites, and eat delicious food, but I also wanted to do some writing, sip cappuccinos, read, and move more slowly. I wanted to explore, but equally so I wanted some down time. Instead of trying to pack as much in as I possibly could I decided to split my time between Rome and Florence, and allow for a couple day trips to Pompeii and to the Tuscan countryside. I knew I couldn’t fit everything that I want to see in Italy into 11 days, so I didn’t even try to. The older I get the more I appreciate slow travel. Allowing time to immerse myself into a place.

I flew from Riyadh to Rome with a quick stop-over in Athens. I had time in Rome both at the start and end of the trip. On my arrival I booked a cute hotel called the Nerva Boutique Hotel which was very close to many tourist attractions. I’ve found that I’d rather pay to stay somewhere more central (especially when I’m traveling solo) than to waste time on public transport to get to a city center. Also I love being able to walk wherever I want to go from my hotel, and being surrounded by shops and restaurants and cafes helps with gelato cravings. Which trust me you will have daily or several times a day when in Italy!!

My first afternoon in Rome was spent catching up with a girl I met 7 years earlier in Costa Rica and her husband who happened to be traveling in Rome at the same time. They share my love of travel, and it was great to ponder the age old question of “what should I do with my life?” with people who understand how difficult decisions are when literally everything is an option. Move to Mexico for 6 months? Go back to Seattle? Stay in Saudi another year? Try out Vancouver? The options are endless and all legit options which makes trying to choose one all the more difficult. Regardless, it was great to have that first afternoon flow so easily with great company.

My first full day in Rome started with an awesome breakfast at my hotel and a lovely conversation with an American girl who was eating next to me. We connected over my American/Canadian accent and fell into an easy conversation. She invited me to meet her for dinner as her parents were flying in later that afternoon. They would become my adopted family of sorts during my time in Rome. We parted ways and I headed towards the Vatican.

The Vatican Museums are enormous. I bought a ticket ahead of time thru my hotel- and I’m sure glad I did because the lines were insane. So. Many. People. Tour buses, and school trips, and a mix mash of languages compacted within the small lobby. I opted to do the audio-tour and started off. The highlights for me was the Museo Egizio which had a spectacular exhibit of Egyptian artifacts, and made me want to go back to Egypt. The Galleria Chiaramonti which had hundreds of busts and statues lining a long hallway. The Sala Rotonda was a beautifully painted room with a stunning mosaic floor surrounded by huge statues. Then of course there is the Sistine Chapel- which was packed with people and didn’t allow photos. The Vatican Museums are a great way to spent most of the day, but it’s overwhelming. I then headed to St Peter’s Basilica. I walked up to the Dome of St Peter’s which I would highly recommend. The view is breathtaking, as is the climb up which involves a spiraling narrow staircase. After making my way back down I spent some time exploring the Basilica itself which was built by Michelangelo and completed in 1626. It is impressive to say the least, but I would recommend doing the museums and the Basilica on separate days. It’s really quite overwhelming to pack it into one day like I did, and I don’t think I fully appreciated it as my eyes had seen so many beautiful things that day. 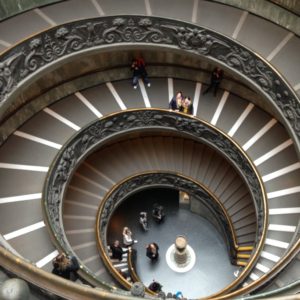 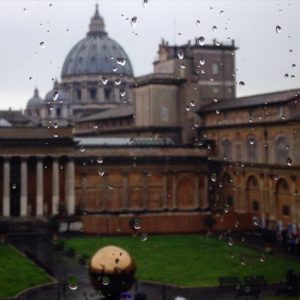 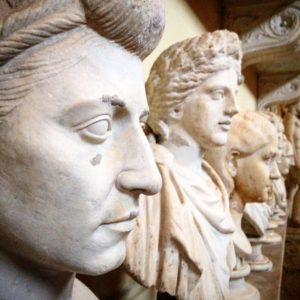 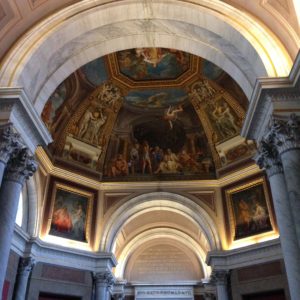 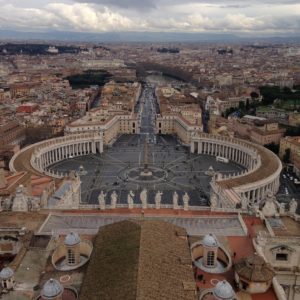 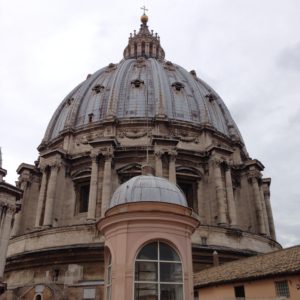 I spent another day touring the Colosseum, Palatine Hill and the Roman Forum. The Colosseum was completed in 80 AD and was cool, but Palatine Hill and the Roman Forum blew my mind. Every direction was a picture perfect view. You could easily spend an entire morning or afternoon here. Wear good walking shoes because you will need them. I knew next to nothing about Palatine Hill and the Roman Forum, which in hindsight it would’ve been helpful to have done some research. I would recommend going as part of a tour as you’ll get the full history of the site. I visited solo, and just referred to my Lonely Planet guide to fill in the blanks. The Roman Forum is a plaza surrounded by old shrines and temples dating back to the 7th century BC. Some of the temples you can go inside, and you can see the remains of pillars and statues dotting the grassy areas. There are some spectacular view points on the way to Palatine Hill looking back towards the Roman Forum. Palatine Hill was a residential area for the upper class. You can buy a combination ticket for all 3 sites. I would recommend bypassing the massive cue for tickets outside of the Colosseum and purchasing tickets further up the road where there are far less people (3 when I went as opposed to hundreds in front of the Colosseum.) 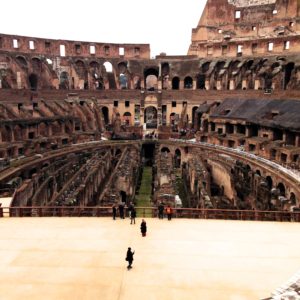 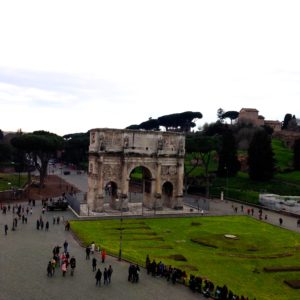 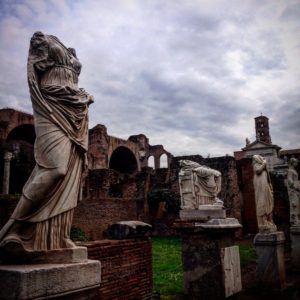 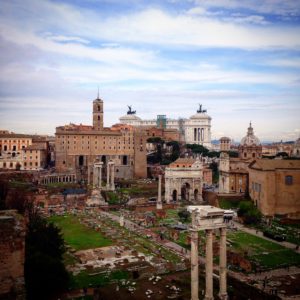 Rome is littered with old ruins, churches and museums. I spent time stumbling across old ruins and visiting museums. And of course eating delicious food and getting my daily fix of gelato. A few of the standout things I stumbled on are the Largo di Torre Argentina a ruin site full of stray cats. Most of them were napping or sunning themselves. I read somewhere that there are some 250 of them. It makes for an entertaining stop-off. The Galleria Doria Pamphilj is an old Venetian palace that’s privately owned and showcases a bunch of art work and statues. The rooms are beautifully decorated and the audio guide gives a thorough history of the family and the building. The Church Chiesa di Sant Ignazio di Loyola is hands down my favourite church I’ve ever stepped foot in. There is a fake fresco painted dome on the roof giving it the appearance that it’s much larger than it actually was. There were 4 very unique paintings on the roof depicting Africa, Asia, America and Europe. The best part though was that there was an art exhibit inside the church. The art exhibit was called “To the Roots of Life” and consisted of different life sized copper sculpted trees lit from the floor in various parts of the sanctuary. They were beautiful to look at and the lighting cast shadows across the floors and walls. I found it mesmerizing and very calming. One afternoon I made my way to Trevi fountain which was packed with tourists and their selfie sticks. I loath selfie sticks. 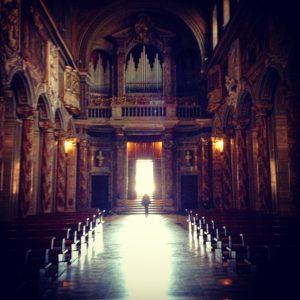 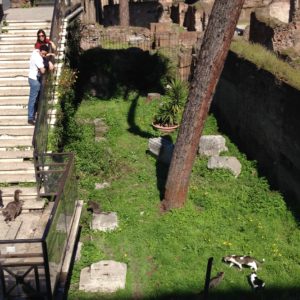 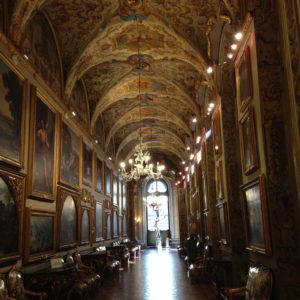 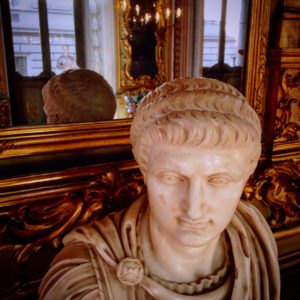 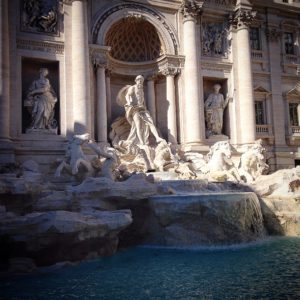 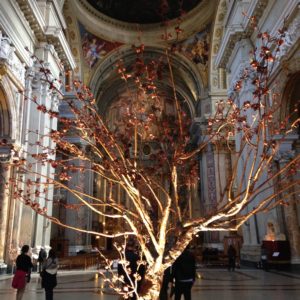 A few of the evenings I met up with my new adoptive family for dinner and shared some wine and many laughs. Upon my return to Rome from Florence I stayed 2 more nights in Rome. This time though I stayed near the Pantheon. When I say “near” the Pantheon I mean I used some hotel credits I had and booked a room that overlooked the Pantheon and the square below. It was awesome!!! My last 2 days in Rome were spent mostly relaxing. I walked over to the Vatican to mail some postcards. I visited the Castel Saint Angelo an old fortress castle with amazing city views. My last night was spent in the company of a lovely couple from Texas and 4 delicious bottles of Chianti. If that’s not a proper sent off from Italy I’m not sure what is. 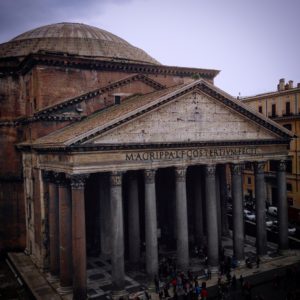 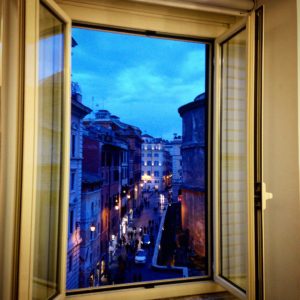 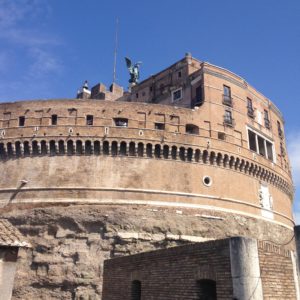 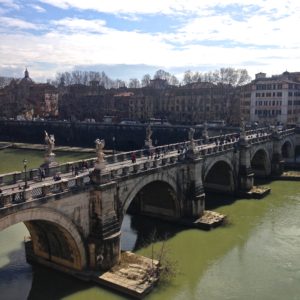