I was going to try and write this post yesterday as September 23rd was Saudi National Day, but I’ve been working night shift the last 3 weeks, and am flip-flopping back to day shift. Yesterday my brain was complete mush- and nothing logical or sensible would’ve been written. This year National Day coincided with the Hajj holiday. This week at work non-essential hospital services are closed- ie clinics, and non-emergent OR’s. Yesterday it was announced that the King has extended the Hajj holiday an additional week. I’m eagerly awaiting to hear whether this means extra vacation days or not. Inshallah it does!! So here’s a brief explanation about what each of these 3 holidays are about….

It’s like any country’s day of independence. Think Canada Day or the 4th of July. September 23rd marks the same day in 1932 when King Abdulaziz announced the Kingdom as a country. National pride is at an all time high and there are flags of the Kingdom of Saudi Arabia all over. There are festivities for families, and I saw some excellent footage of fireworks at the Ritz Carlton hotel here in Riyadh. People take to the streets in costumes with green wigs or wearing flags, or the colours of the flag (green and white.) Traffic is reported to be a nightmare. I had wanted to run out yesterday early in the evening but my lovely driver “J “flat out refused. He said “people very crazy. They leave eggs out in the sun for a month and then throw them at passing cars. If they not throw eggs they throw rocks. Very bad.” I couldn’t really argue with that. He also said that most of the hospital drivers wouldn’t be going out after 7pm. On Canada Day back home we get day drunk. In Saudi Arabia the youth reportedly throw rotten eggs at motorists. Kinda reminds me of kids back home smashing pumpkins in the streets on Halloween. I rang in National Day from the comfort of my couch as I tried to stay awake watching Netflix until a reasonable bedtime hour with the hopes of sleeping thru the night.

Hajj takes place every year according to the Hijri calendar during the last month and lasts 5 days. It is considered to be the 5th pillar of Islam and every Muslim is required to make the pilgrimage to Mecca at least once in their lifetime assuming they are physically able and can financially afford it. In 2015 it is projected that 2 million Muslims will take part. A reported 800 flights per day take off or land at the airport in Jeddah- there is an entire terminal dedicated to Hajj and is only open during this time. I won’t pretend to be any sort of expert on Hajj- most of what I’m writing is summarized off the interweb, or drawn from conversations with Saudi’s or ex-pat Muslims that I work with. I wanted to share it with you though because I think as an ex-pat living in Saudi Arabia it’s always a great idea to understand the culture. And since religion drives this culture, it’s equally important to understand the major religious practices in this part of the world. 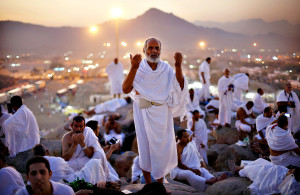 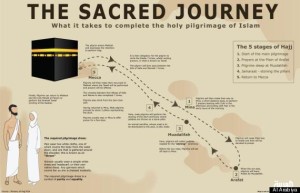 Unlike most of Saudi life the sexes are not segregated at the Holy Mosque during Hajj. Men often wear 2 pieces of white sheet or towels while women are required to dress traditionally with their hair covered. Interestingly, women who normally cover their faces when out in public are NOT allowed to do so during Hajj. As far as I can tell the actual pilgrimage is quite orderly as each day is broken into different rites that are practiced that day. Most pilgrims travel in groups with guides and handbooks explaining the requirements of Hajj. These requirements include praying, declaring their intention to perform Hajj, and performing Tawaf which entails walking counterclockwise around the Kaaba. The Kaaba is a large black box and is the holiest site in Islam. It is considered to be the House of Allah. After Tawaf the pilgrims go to Mina for a day of prayer. This is the first day of the Hajj. The second day of Hajj is spent at Mount Arafat- this is where it is said that Muhammed delivered his last prayer. Pilgrims stand in vigil listening to a sermon and repent for sins for the afternoon. After sunset they move to a place called Muzdalifah where they have evening prayers and sleep outside on the ground. The third day pilgrims take part in a ritual called stoning the devil which involves throwing 7 pebbles at one of 3 pillars, and after that animals are slaughtered and often given to the poor. This coincides with Eid al-Adha. Male pilgrims then shave their heads and women clip the ends of their hair. Day four the pilgrims repeat the “stoning of the devil” by throwing 7 pebbles at the 3 pillars. They must then leave for Mecca that day. Before leaving Mecca they again perform Tawaf around the Kaaba. The fifth and final day is a repeat of the rituals on the fourth.

This years pilgrimage has been marred by tragedy with the crane collapse earlier this month which killed more than 100 people. Sadly, earlier this morning while pilgrims were taking part in the “stoning of the devil” there was a stampede and the latest reports say that over 700 people have died.

Eid al- Adha is the second Muslim holiday.  Eid al-Fitr is the first holiday which marks the end of the fasting during the holy month of Ramadan. Eid al-Adha centers around the story of Abraham and his willingness to sacrifice his son. Meat is sacrificed on this day and divided into 3 sections. One portion for the family, one portion is given to other family members, and the last portion is given to the poor. Eid is seen as a time of celebration. People dress up in fancy clothes, and exchange gifts. Happy Eid to all!!

I hope you’ll be kind to me if I got some of the above information wrong. I have pretty elementary understanding of the Islamic religion, but still felt it was important for you, my readers, to be informed!

Blissed out in Bali