After my blissed out week at a retreat in the northern beach town of Bondalem Bali I headed inland to Ubud, the island’s artistic hot spot. I had visited Ubud back in 2008 the first time I was in Bali, and let me just say I was unprepared for how much it had grown. Ubud was jarring coming out of the tranquility of the meditation retreat I had been at. So much traffic, so much noise, so many tourists. It was a total assault on the senses, and that first day was really overwhelming. Thankfully, my first 2 nights I had booked to stay in the rice fields just outside of Ubud, which was much calmer. Well relatively calmer. That first night I was awoken at 4am thinking someone was in my room and violently shaking my bed, and then in my disorientation it also sounded like someone was trying to get in the room by shaking the door in its frame. Turns out there was a 5.3 earthquake off the coast. Once I determined that a) I was not crazy b) it was unlikely the room was haunted and that c) this was very likely an earthquake, I did what any savvy person would do……I googled “what to do in an earthquake” so I would be prepared if there was another one, and checked social media. Come on. I know that’s what you all would do! 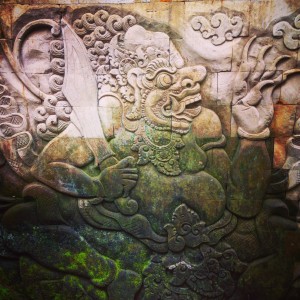 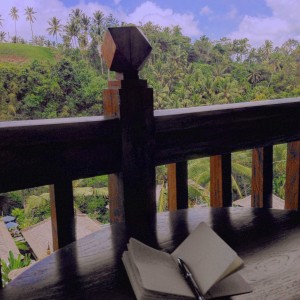 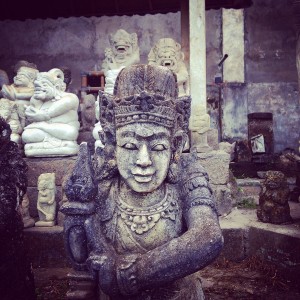 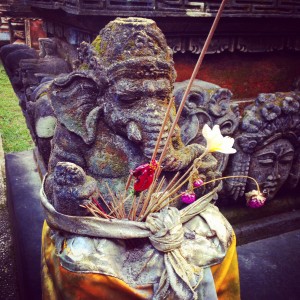 After 2 nights in the rice fields I moved to Ubud proper. For 5 nights which extended into 6 when I rescheduled my flight to stay an extra night. I had initially booked at a cheaper hotel, but after some issues there I moved to the hotel next door which turned out to be the nicest place I’ve ever stayed. In my life. Nicer than the Maldives. And that’s pretty hard to do. To be fair I didn’t really know what I was booking. I basically called to ask if they had a room available, a pool, and wifi. They said yes and I showed up. The lobby was beautiful. During check-in I asked is there AC? And the lady was like yes. In each room. And in my head I was like- of course it would be in each room lady. Then she took me to the room. On the way she referred to it as the “Canopy Suite.” My eyes almost burst out of my head. It was bigger than my apartment in Saudi. It had separate rooms- with an AC in each room. Then there was the infinity pool. And the amazing breakfast. And the tub in the bathroom was like bathing in a barrel. Ok. It was actually bathing in a barrel. And they pulled my covers back every night and left me cookies. So now you see my dilemma about having to stay another night. If you go to Ubud you should look into staying at Bisma Eight. Well worth over extending my budget. 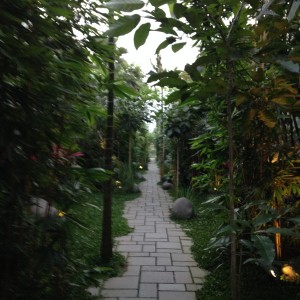 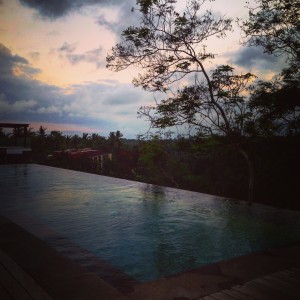 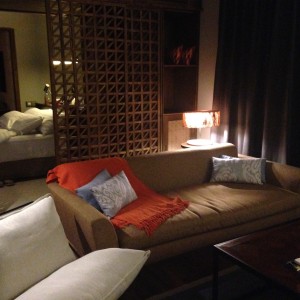 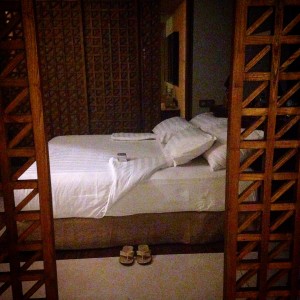 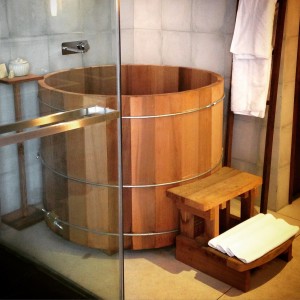 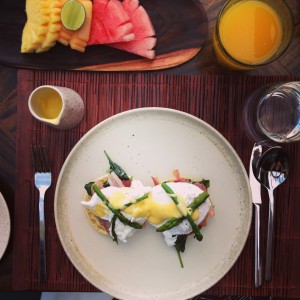 Ubud is full of shops, restaurants, museums and galleries. I spent my time there catching up with my other retreat-sisters, and walking around town. There are many great restaurant choices. One that was at the top of my list was Locavore. They have a very well reviewed tasting menu but they book out a month in advance and I wasn’t able to get a reservation. By chance I stopped in there for lunch one day. Table for one? And they seated me overlooking the kitchen. It’s not cheap by Bali standards, but by western standards it’s a steal. I had a 7 course meal with a couple glasses of wine and it was culinary heaven. Half of it I wasn’t exactly sure what I was eating- what exactly are fish lips anyways?  But it was all so good. If you are in Ubud make a reservation and go. I’ll be thinking of this meal for months to come. 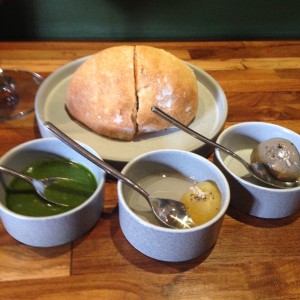 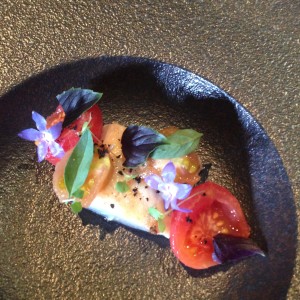 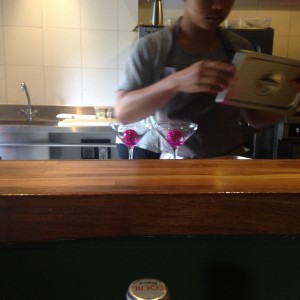 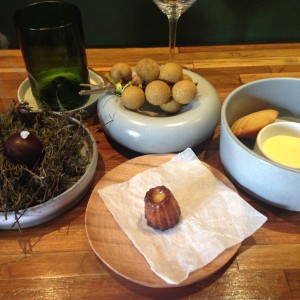 One of the days I did a day trip with my French Canadian retreat-sister. We had an energetic Balinese guide named Gusti who took us to 3 temples in the southern part of the island while telling us of Bali culture and the practices related to Balinese Hinduism. It was such a great day. We visited Taman Ayun Temple mid morning and we basically had the temple to ourselves. This temple is from 1634 and was once the royal temple. It has beautiful gardens with the traditional tiered Balinese pagoda roofs and many ornate stone carvings. The temple is surrounded by a moat which used to hold alligators. The sky was very moody when we visited which made for great photos. 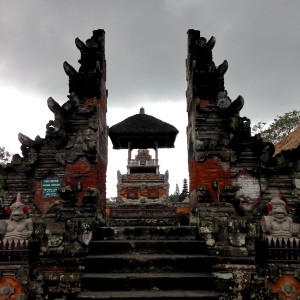 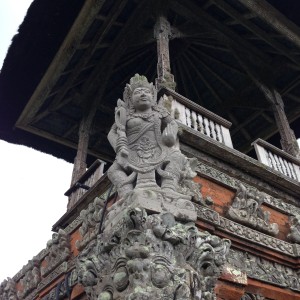 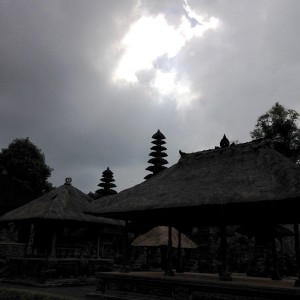 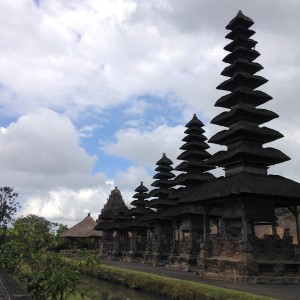 From here we dove about an hour to Tanah Lot Temple which as legend has it has snakes that guard the entrance to the caves below the temple. This temple is situated alongside the sea on a rocky cliff and it is nothing short of spectacular. The waves were large and frothy as they crashed to shore. This complex was quite large with a smaller temple off to the right and then the main sea temple to the left. By sea temple, I literally mean in the sea. Depending on the tide you may or may not be able to visit. Tide was in when we were there so we couldn’t go but it is beautiful nonetheless. You should be very careful of the cliffs though- our guide had seen tourists fall over the cliffs and get swept away so he kept us well away from the roped barriers. As we were getting ready to leave we randomly ran into 2 of our other retreat-sisters. Bali was full of of many such encounters. It was amazing that we all ended up in the same spot of land at exactly the same time. 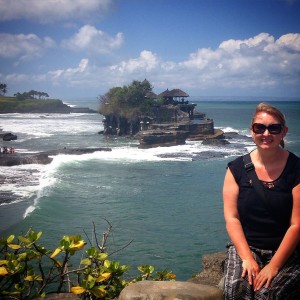 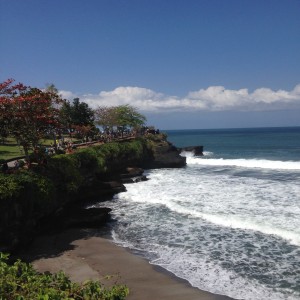 We then got back in the car and drove another 90 min to Uluwatu temple. Bali is not at all equipped to handle traffic. Most roads are 2-laned roads with little room to pull over or passing lanes. And then of course they are filled with cars, trucks and loads and loads of motorcycles. When we arrived at the temple we were greeted by signs and loud recorded warnings about the bulglarizing monkeys. As I’ve previously mentioned. I’m not a huge fan of monkeys. Or rabies. I was mildly terrified which caused Gusti our guide great enjoyment as he bravely tried to protect me. We did see monkeys, but they kept their distance. This temple is also alongside a steep cliff. In fact we could see Uluwatu temple from Tanah Lot temple. I read somewhere that the temples along the sea were built as a chain so you could see one from the other. There are 2 parts to this temple and I would highly advise wearing good shoes and bringing plenty of water. I would also recommend a hat, but can’t guarantee it won’t get pulled off your head by a cheeky monkey. This temple also had mesmerizing ocean views. I basically kept taking the same photo over. And over. And over. 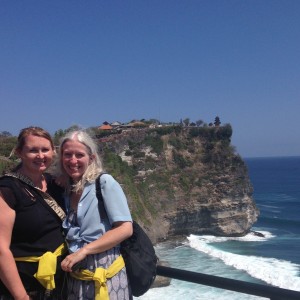 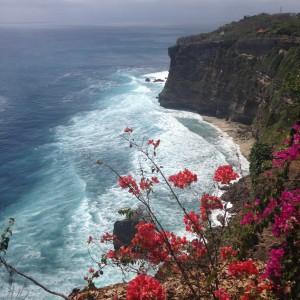 While Bali is full of tourists it’s still good to dress and act respectfully. Most temples won’t let you in if you’re dressed inappropriately anyways, but here’s an idea of what you should wear. Buy a sarong- you’ll need to be wearing one to enter a temple, and they double as a towel or beach cover. You will also need a sash to tie around your waist but many temples provide these, or do what I did and just use a scarf. Make sure your shoulder are covered- a simple t-shirt will do. Don’t try to enter a temple in a swimsuit top and hot pants. It seems pretty logical but you know there are people who try this. Also as with any temples/religious sites the world over- ladies if it’s that time of the month you’re not supposed to enter. One of my retreat sisters told me how her guide made her read the list of rules before entering a temple and she basically had to give him the “all clear” to tell him she was safe to go in. Also most temples have donation boxes- your call on how you feel about donating. I usually opt to.

So that wraps up my time in Ubud Bali. As I write this I can’t believe it was almost a month ago. I’m going to Munich for Oktoberfest this weekend for 5 nights and then I don’t have any major travel plans until I go home for a visit the end of November and first bit of December. I’ll be spending Christmas in Dubai which I’m super pumped for. Seeing as I’ve decided to stay in Saudi another year I’ve just requested a bunch more vacation time in the new year, with many ideas but nothing concrete as of yet.

Where are your upcoming travel plans taking you?

So You Want to Work in Saudi Arabia? Part 1 (The Good)