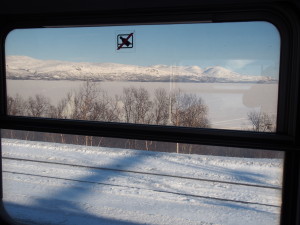 We took the train from Narvik Norway to Kiruna Sweden. It’s a reportedly scenic train ride, although this must be specific to the summer months. In the winter it’s a never ending sea of grey. Grey sky, grey water, white snow, bare trees. The train takes about 3hrs and it’s good to note the the train station has moved in Kiruna so it’s not really walking distance into town. Especially in the winter. FunFact: the city of Kiruna is in the process of moving 3km to the east as the current city center is built over an ore mine and is at risk of falling into the mine. We stayed one night in Kiruna. It’s a really cute and walkable town- as long as you have grippy shoes, as many of the walking paths are quite snowy and icy. We spent an afternoon checking out the local shops and eating some delicious food. There is quite a big Sami population in Kiruna. The Sami people are the indigenous people of Scandinavia and live in northern Norway, Sweden, Finland and Russia. They have a very interesting heritage, and colourful traditional dress. I expected the indigenous people to look similar to the Inuit population in Canada, but many of the Sami people we met looked exactly the same as other Norwegian or Swedish people we met. Traditionally they are known as being nomadic reindeer herders, and reindeer are a huge part of the local diet. We ate reindeer meat several times during our time in this region. Sorry Rudolph!! The guesthouse we stayed in had a Sami museum in the basement, which was very helpful to see how the Sami people lived and to read about their heritage. 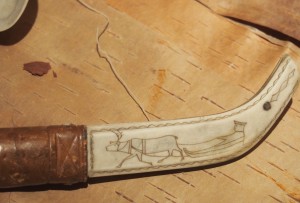 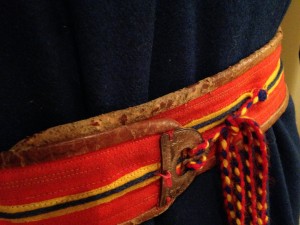 Our second night in Sweden was spent staying at the Ice Hotel. This was is fact, the entire reason we staying in Kiruna. I really wanted to stay at the Ice Hotel and see the Northern Lights while I was there. The Ice Hotel offers rooms in the Ice Hotel (made of ice hence the name) or cabins on the Ice Hotel property. We decided to stay in a 2 bedroom cabin instead of the ice rooms as that seemed more comfortable. The Ice Hotel originally opened in 1990 and is located along the banks of the Torne River. Every year in March ice blocks are taken from the river and stored with snow in freezing temperatures until November when the hotel is built. It’s open to guests from December to April when it melts. We took a tour and the guide said that the hotel is built on a slight slant so that as the hotel melts the water returns to the river from which it came. I liked that a lot. Every year artists from around the world arrive and design the reception area, the art suites, chapel and the Ice Bar. So every year the rooms are different. It’s utterly beautiful inside the hotel. The hotel also provides complete winter gear for guests as well as a buffet breakfast. 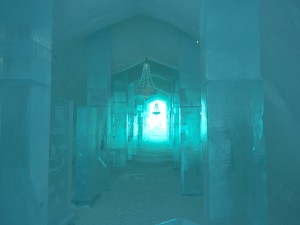 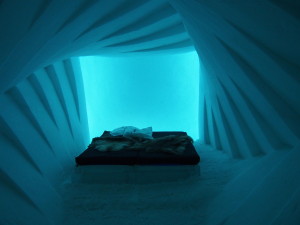 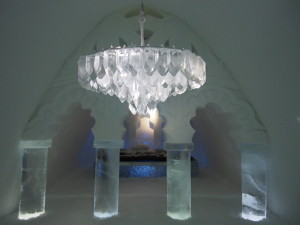 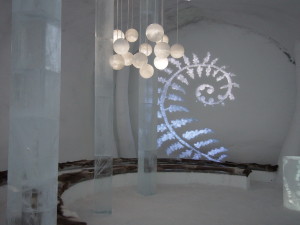 We splurged and had a very fancy dinner at the restaurant on site. 4 of the courses were served on blocks of ice from the Torne River. It included bleak roe, arctic char, smoked reindeer tartar, and fillet of moose to name a few of the courses, all expertly paired with wine. Part way through dinner there was a big commotion as everyone rushed outside to view the Northern Lights. It wasn’t the best display as it was hard to make them out with the naked eye. They looked more like a greyish haze in the sky, until you took a photo and then they appeared bright green. We finished our dinner and bundled up to walk down to the shores of the river to watch the Northern Lights. From here they were much more visible, and we braved the cold temperatures until our cameras froze and decided they were done taking photos. We then visited the Ice Bar for a cocktail served in……you guessed it…..an ice glass. It was a really great day. 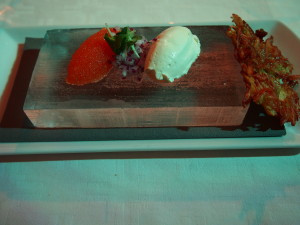 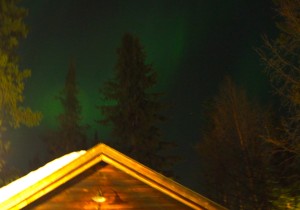 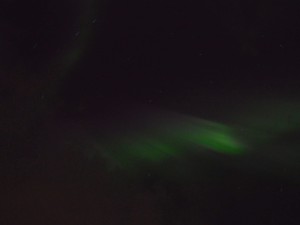 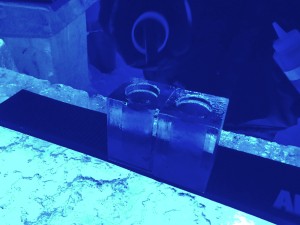 The following day we had a long day of travel heading for the Swedish/Finnish border. We took the train from Kiruna to Lulea and then caught a bus to the border town of Haparanda/Tornio. This is a very interesting place because there isn’t really a border separating the 2 countries, and yet there is a time change of an hour. This made things very confusing the following morning as we woke up an hour earlier than we needed to when our bodies were on Swedish time but our bus was on Finnish time. I still can’t wrap my head around it! Onwards to Finland……..