So last month I spent a week in Spain. 4 nights in Barcelona and then a night in both Zaragoza and Madrid. I loved it. Spain is rad and if you haven’t been then you should go asap. The people were so friendly. Like over the top friendly. And that’s really something for me to say seeing as I grew up in Canada a country often remarked as one of the friendliest countries in the world. I’m sure like in most non-English speaking countries people are often friendlier when you attempt to speak their language. So I busted out my best Spanish and wowed people with my Hola’s and was able to order beers and ask how much something cost, and could you please bring the check fine sir. Otherwise my Spanish skills consist of some medical terminology and that’s about it. But we got by. Mostly because as with the world over- almost everyone speaks English anyways so you’re never really not able to communicate. 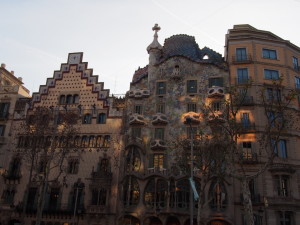 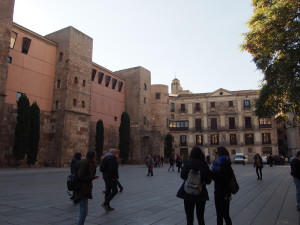 The other great thing about Spain is the food, and that wine is available everywhere. And it’s also totally acceptable to get day drunk of which I am a huge fan. So I ate fresh seafood, tapas, and drank Spanish wine to my heart and belly’s content. Also, Spanish men are uber stylish and often super hot. So while getting day drunk there was always a lot of eye candy for my viewing pleasure which only added to Spain’s appeal. But here’s the one bad thing about Spanish men……they scratch their balls a lot. Often while making eye contact and chatting with you. It’s a little disconcerting. Let me set the scene for you. We got lost. So asked a random dude for directions. He’s telling us which way to go and then oh great I think he’s going to point which way we need to go. Nope. Scratching his balls. Unfortunately, my eyes tend to follow any type of quick movement like a cat to a laser pen so there’s this really awkward second or so where the dude is scratching and my eyes are just taking it all in. I’m not sure if it’s an underwear issue (or lack of underwear) but apparently as far as I can tell, Spanish balls are itchy balls.

Ok. Enough about balls. Now onto what we actually did besides eating, drinking, and men watching. Normally I’m not a huge fan of Hop on Hop off buses because I get very irritated by other tourists, but in Barcelona it’s a great way to go, as a bunch of the things you want to do are spread out around the city. Also it was chilly when we were there. Ok. Fine. We were also kinda lazy. So there’s that. I would recommend a 2 day pass. You’ll have plenty of time to see everything you want that way. We stayed on the Old Gothic area like a 2 min walk to Las Ramblas street. There are a ton of small hotels there, but some of the roads aren’t accessible by vehicle so be prepared to walk a bit with your luggage. This area is pretty central and you can walk to lots from there.

If you don’t know much about Barcelona you’ll need to at least read up about Antoni Gaudi. You will hear his name over and over and he was very influential in Barcelona. He was a Spanish architect who died in 1926, but the city is filled with buildings designed by him. In fact one major building of his design the Sagrada Familia is still under construction funded by private donors. Sagrada Familia is an enormous Roman Catholic church that was designated as a UNESCO site. You would be plain silly to visit Barcelona without going here. The outside is bizarre and Gothic and actually quite hard to explain. There are spires stretching up towards the sky with cranes and drilling and chiseling heard over the Barcelona traffic sounds. The inside will literally take your breath away. The light reflection from the stained glass windows has a hypnotic effect and even though it was super crowded with tourists there was this overwhelming sense of peace. The thing I loved about the on going construction was that even after his death his work is still taking place. Little by little the cathedral will eventually be completed. That what he didn’t complete during his life will carry on. It’s really remarkable. Try and go early as there are hoards of tourists and I dread to think how busy it would be during the summer months. 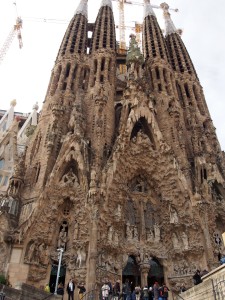 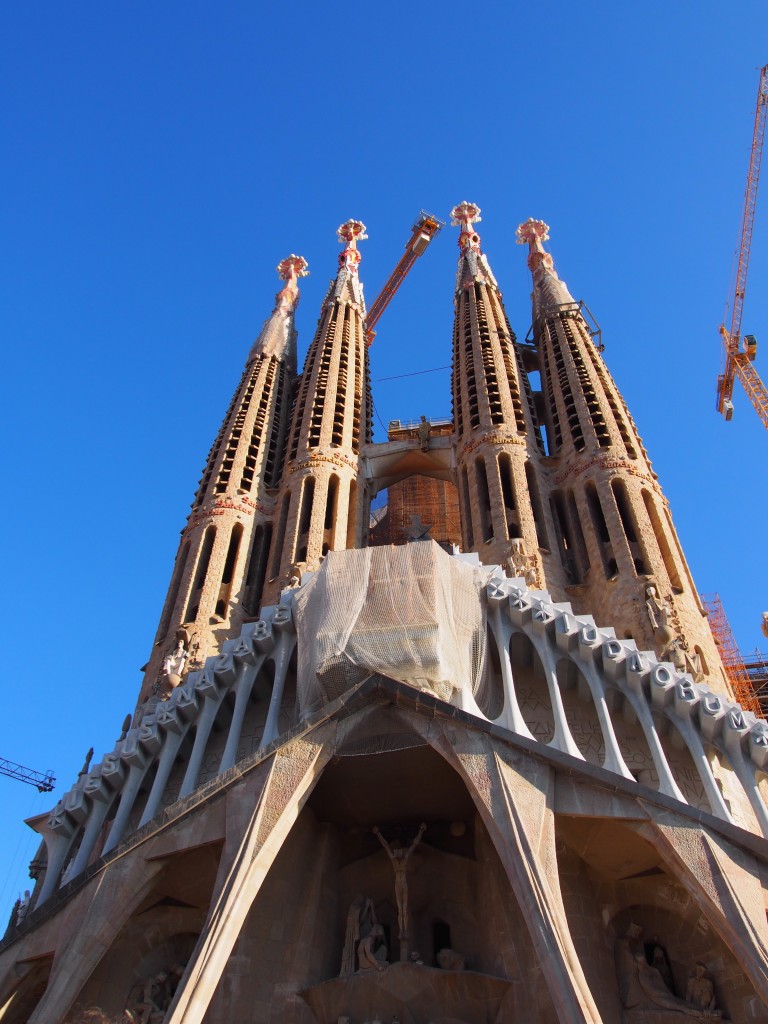 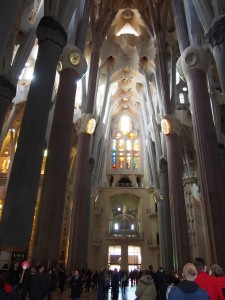 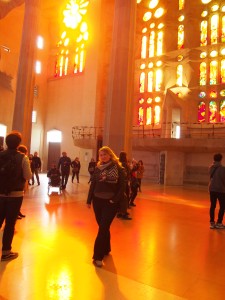 Park Guell is another very popular tourist site also designed by Antoni Gaudi. This park has also been declared a World Heritage Park by UNESCO and is well worth the visit. True to Gaudi’s style the park design is bizarre but it’s not Gothic like the Sagrada Familia. It has a more magical feel. Make sure to go to the roof of the main terrace which has stunning views of the city and some of the most beautiful mosaic work I’ve ever seen. It’s also a perfect place for people watching, or to sit and take a break. As I’ve mentioned there are Gaudi buildings all over the city, but we only visited one other one during our time there called Le Pedrera. This site is also not surprisingly, a UNESCO site. The building is impressive from the outside given its unique facade, but it’s famous for its bizarre rooftop adorned with 28 chimneys some covered with shiny pottery pieces. It was interesting, but it was the most expensive entrance we paid during our whole trip and I’m not really sure it was worth the money. You do get to tour one of the apartments and there is a great exhibit on the design and reconstruction project. 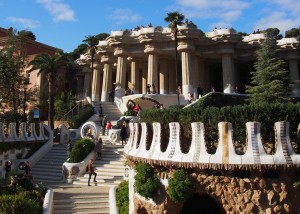 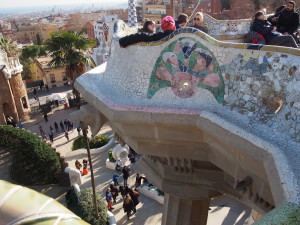 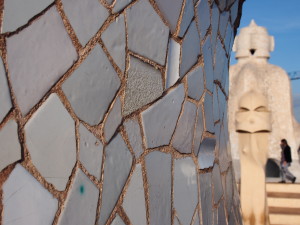 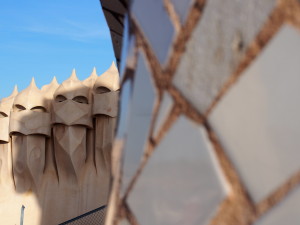 We spent the rest of our time in Barcelona visiting the Monastery of Pedralbes a Gothic monastery from the 14th century. We also visited the Erotic Museum (sorry Pops) which was actually pretty entertaining and showcased cultural artwork pertaining to sexuality from around the world and provided more than a few good laughs. We visited the Picasso museum where I learned that I actually don’t like modern art much at all, but I did very much appreciate his early works. He was a very talented artist at a very young age. We also visited the main Cathedral which you can take an elevator to the roof for some great views of the city. And that pretty much wrapped up our days in Barcelona.  From here we traveled onwards to Zaragoza….. 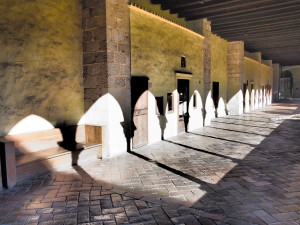 Cloisters at the Monastery 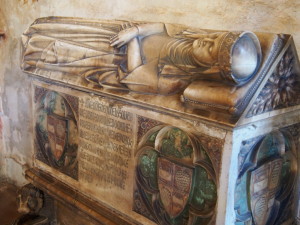